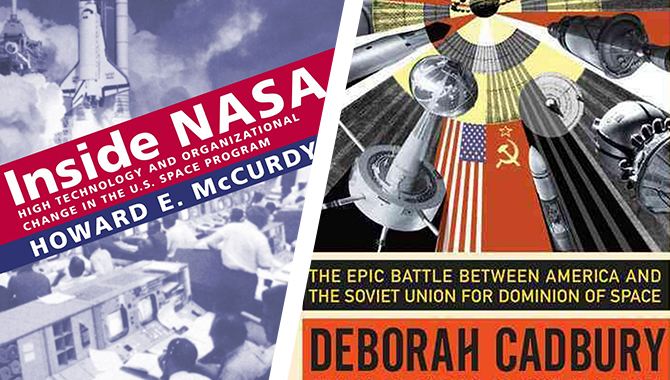 From time to time, the editors will offer brief reviews of books they believe will especially interest ASK readers. Here are descriptions of two books, very different from one another, that we admire.

Inside NASA: High Technology and Organizational Change in the U.S. Space Program

Howard McCurdy’s Inside NASAdescribes how and why NASA’s strong technical culture changed as the Agency grew older. The agencies brought together to form NASA were proponents of outsanding technical capability, which allowed innovation to flourish. According to McCurdy, some of the cultural beliefs NASA began with and lost or lessened along the way include in-house technical capability, the importance of hands-on work, and the ability to attract an exceptional workforce.

In its early years, NASA recognized that risk and failure were inherent in its ambitious projects and goals. The early culture sought situations where failure could occur and worked to solve problems through the sharing of ideas and viewpoints. By normalizing risk, accepting failure, and anticipating trouble, NASA created an atmosphere in which these things could be discussed openly. Handling risk required open discussions in which midlevel managers and engineers could voice warnings and dissent without restraint. This openness was crucial for success.

McCurdy argues that much of NASA’s strong technical culture was lost during the budget scale-back that occurred after reaching the moon. The Agency let trade, craft, and technical support employees go and wrote contracts for the same services as a way of adjusting to descending personnel ceilings. Relying on contracting diminished the importance of in-house personnel, reduced the opportunity for hands-on work, and turned NASA scientists and engineers into contract administrators. According to McCurdy, no single factor affected NASA’s technical culture more than the increased use of contractors.

McCurdy explains that cultures consist — at a minimum — of practices, beliefs, and assumptions. “Practices in NASA changed considerably,” he writes. “Beliefs changed some. Assumptions changed hardly at all. The overall culture changed in the sense that the remaining beliefs and assumptions lost their power to elicit appropriate practices.”

Space Race: The Epic Battle Between America and the Soviet Union for Dominion of Space

To tell the story of the Cold War competition between the United States and USSR for space flight achievement that culminated in Neil Armstrong’s “small step” onto the surface of the moon, Deborah Cadbury focuses on two figures: Wernher von Braun and Sergei Korolev, the chief Soviet rocket designer. Shifting back and forth between them, she dramatizes their efforts to win support for their similar visions of space exploration and the technical, political, and personal challenges they wrestled with in pursuit of their goal.

This is not the book to go to for a clear and careful analysis of the technology of Vostok or Apollo. Rocket science is not Cadbury’s strong suit. There are technical errors in the book and sentences that read like faulty transcriptions of technical explanations the author didn’t quite understand.

But there are good reasons to read this book. Foremost among them is how vividly it portrays the factors other than technology that influenced and eventually decided the space race. American and Soviet engineers accomplished great things, but the technological challenges they overcame were in some ways easier to deal with than the political pressures, organizational difficulties, and institutional and personal rivalries that sometimes threatened the programs. Cadbury shows just how complex and complexly human the space race was. And she doesn’t shy away from the moral implications of von Braun’s work in Nazi Germany and the intertwining of the noble goal of space exploration and the desire for military supremacy. But the book’s novelistic evocation of the first manned flights and the lunar landing remind us just how thrilling those events were and how great an accomplishment it was to touch the moon.

Howard E. McCurdy is a professor in the School of Public Affairs at American University in Washington, D.C., and author of seven books on space policy, including Faster, Better, Cheaper: Low-Cost Innovation in the U.S. Space Program and Inside NASA, a study of the Agency’s changing organizational culture. He recently completed a book with Roger Launius, Robots in Space.