Back to Top
Home/25/ASK Magazine/Finding a Way: The Spitzer Space Telescope Story 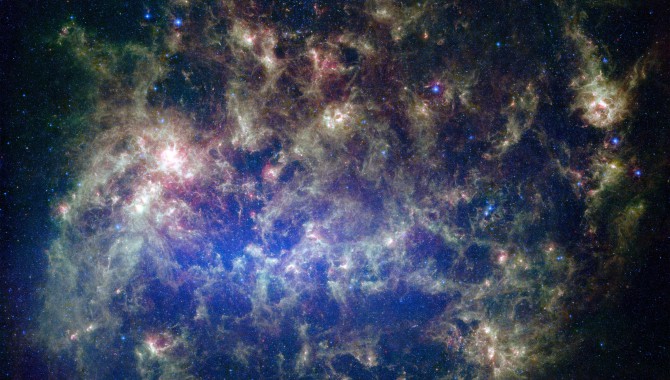 On August 25, 2003, at 1:36 a.m., I was sitting in the Mission Director Center at Cape Canaveral. That is the exact time the Delta II rocket ignited and carried the Space Infrared Telescope Facility (SIRTF) into an orbit that is the first of its kind with an infrared telescope design that is also the first of its kind. After three months of successful in-orbit checkout, SIRTF was officially commissioned and renamed the Spitzer Space Telescope after Lyman Spitzer, the renowned astrophysicist. 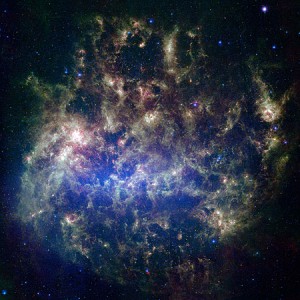 This vibrant image taken by Spitzer Space Telescope shows the Large Magellanic Cloud, a satellite galaxy to our own Milky Way galaxy. Nearly one million objects are revealed for the first time in this Spitzer view.
Photo Credit: NASA/JPL-Caltech/M. Meixner (STScI) and the SAGE Legacy Team

As I write this article, Spitzer has just celebrated its third anniversary, and all indications show its cryogen, which cools the telescope and its instruments to just a few degrees above absolute zero, will last beyond five years. An infrared telescope observes the thermal emission of objects and therefore must be kept very cold to prevent its own emission from drowning those from observed objects. Spitzer uses liquid helium to cool the telescope to 5 kelvin; the detectors are cooled to 1.4 kelvin, or -272°C.

SIRTF was originally conceived as a follow-on mission to the InfraRed Astronomical Satellite (IRAS) that was launched in January 1983. At that time, SIRTF stood for Shuttle Infrared Telescope Facility. The shuttle was supposed to be the workhorse for all NASA payloads, human or robotic, and SIRTF was to fly two-week sorties attached to the cargo bay. Almost as soon as this concept was conceived, though, it became clear the shuttle environment was not conducive to the thermal sensitivity and cleanliness required by an infrared telescope. The shuttle- attached concept was replaced by a free-flyer concept: SIRTF would be launched by the shuttle, and the Orbital Maneuvering Vehicle (OMV) would raise its altitude to 900 km. When the cryogen ran out, the OMV would bring SIRTF back to the shuttle, the cryogen tanks would be refilled, and the OMV would raise it back to operating altitude again.

An infrared telescope in a low-Earth orbit has to overcome two disadvantages. First, the earth is a significant heat source. Second, it blocks half the sky. In addition, the telescope cannot point near the sun, so the telescope would routinely have to change its altitude to ensure sensitive optics and thermal surfaces would stay within design constraints. Of course, we know that the OMV never materialized, and after the Challenger accident in 1986, the shuttle-based concept was dropped completely.

This was such a radical design that it took a significant effort to arrive at a proof of concept… It took another eight years to go from that concept to launch.

In November 1988, the Jet Propulsion Laboratory (JPL) was asked to conduct a SIRTF high-Earth orbit (HEO) study. That was when I became involved with the project. I led the mission analysis portion of the study. We chose an orbit altitude of 70,000 km, which was later raised to 100,000 km. That altitude eliminates the two disadvantages of the low-Earth orbit mission. At that distance, the earth only blocks a seven-degree cone of the sky and the effects of the earth’s heat are minimal. Also, that altitude is above the trapped radiation zone, the region surrounding the earth where high-energy charged particles from the sun, and cosmic rays, are trapped by Earth’s magnetic field and can interact with infrared detectors to produce undesirable noise.

The high-Earth orbit has a significant disadvantage, however. To achieve it, the launch vehicle would have to carry the telescope into a parking orbit, initiate a burn to transfer the telescope to 100,000 km (a quarter of the distance to the moon), and then perform a second burn to circularize the orbit. The total change in speed of the two burns is about 4 km/sec, more than what is needed to send a spacecraft to Mars. It only takes about 3 km/sec to escape Earth’s gravity. To reach a high-Earth orbit, we would have to use a Titan IV launch vehicle. I knew that the orbit was not efficient, but the project was going well using that mission concept and we had no motivation to propose changes. One estimate of the total cost of the mission was close to $2 billion, however. In the budget-constrained climate at NASA, it was inevitable that the Titan SIRTF would be cancelled, as it was in late 1991. 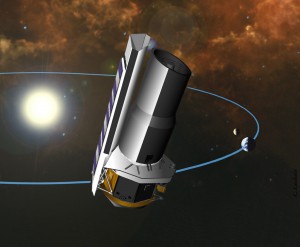 The project had to regroup. Jim Evans became the project manager in January 1992. The scientists and instrument teams scheduled a meeting at JPL to consider ways of reducing cost. A week before the March meeting, Jim came to my office to ask me if I had any ideas. I was a little taken aback by his personal visit. Jim was new to the project, and he and I had not known each other prior to SIRTF. I was supporting the project on a part-time basis but was not part of the project staff and not collocated with the project team. Jim was at least two levels above me in the JPL management hierarchy. Trying to sound as casual as I could, I replied, “I can talk about changing the orbit.”

Jim’s background is not in astrodynamics, so I did not try to explain the details of my idea. I simply said that sending the telescope into an Earth escape orbit would make it possible to use a smaller launch vehicle, such as one of the Atlas family. He took my word for it and said he would ask to put me on the agenda. A couple of days before the meeting, the agenda was circulated. I was not on it. I thought Jim had not followed through, or the agenda had so many other proposals that mine was dropped. I was not going to push for it. I was surprised again when Jim called me and asked me if I had changed my mind about presenting the orbit option. When I told him I was ready but the agenda did not include me, he said that was a mistake. Shortly afterward, a new agenda was circulated, with my name included.

Don’t get locked into any one way of achieving your goal; there may be a better way to solve the problems you face than that first good idea.

The day came. When it was my turn to speak, I explained why a high-Earth orbit is an inefficient orbit and used an Atlas performance chart to show that the Atlas can carry only 1,600 kg to HEO but can carry 2,700 kg to an escape orbit. That was still a far cry from the 5,700 kg SIRTF designed for launch on a Titan IV. But I pointed out that a telescope in cold, deep space far from the earth might not need as much cryogen to cool it. In addition, the size of the sun/Earth aperture shield could be reduced since there would be no Earth avoidance zone anymore. Using a foam cup as a prop for the telescope and a 3 x 5 inch index card stapled to the side of the cup for a solar panel, I explained how the telescope would always have the solar panel toward the sun and still be capable of pitching and yawing to allow long-duration observations. 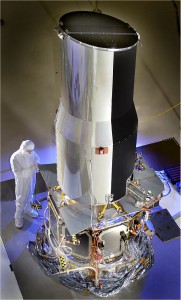 My brief explanation was met by a few seconds of dead silence. Then Frank Low, the facility scientist, jumped up and said, “That is the best idea I’ve heard today.” The project quickly put together a proof-of-concept study and showed that an Atlas SIRTF was possible, but with the mission life reduced from five to two and a half years. One estimate pegged the cost in the mid-$800 million range, a reduction of more than half.

The new SIRTF mission was well received by NASA Headquarters and Dan Goldin, who became the NASA administrator in April 1992. But the cost was still too high for the era of faster, better, cheaper. The project team was told it had to cut the price tag to under $500 million and consider the Delta II class of launch vehicles. It was time to pull another rabbit out of the hat.

This was such a radical design that it took a significant effort to arrive at a proof of concept. In early 1995, the project finally settled on the Delta II solar orbit warm launch SIRTF. It took another eight years to go from that concept to launch, with many trials and tribulations, but the mission concept essentially remains the same. With better refinement in the cryogen system design and the use of an enhanced version of the Delta II, we managed to build a SIRTF with a cryogen life of at least five years. The launch mass of SIRTF was 852 kg.

The basic lessons of this long, complicated story are fairly simple, but I think they’re important. First, don’t get locked into any one way of achieving your goal; there may be a better way to solve the problems you face than that first good idea. Second, when you’re looking for new ideas, especially radical new ideas, it makes sense to cast a wide net and welcome a broad range of thinking, expertise, and imagination.

As I was sitting at the Mission Director Center at Cape Canaveral watching the Delta II rocket carry SIRTF into its solar orbit, I could not help wondering what would have happened if Jim had not insisted that an idea had to be heard.

Note: Jim Evans left SIRTF in October 1993 when he was promoted to assistant lab director. Sadly, he passed away shortly afterward. This story is a tribute to him and many of the unsung heroes on SIRTF who contributed to the success of the mission.

Johnny Kwok is the assistant director for formulation in the Engineering and Science Directorate at the Jet Propulsion Laboratory. In addition to being the program manager for Phaeton, he oversees activities in workforce planning, concept development, and costing.