Back to Top
Home/30/ASK Magazine/Applying the Secrets of Hubble’s Success to Constellation
Frank J. Cepollina

From its ignominious beginnings to its triumphant redemption, the story of the Hubble Space Telescope is known around the world. What is less well known is the story behind the story—the elements that made Hubble’s ultimate success possible. 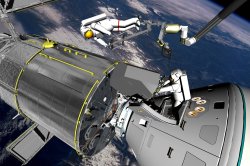 In 1990, I waited impatiently with the rest of NASA for the first images from the marvelous new Hubble Space Telescope to be released. Then came the bad news: spherical aberration. Simply put, the much-touted space telescope had blurry vision. The embarrassment was excruciating as the world came to know Hubble as the $1.6 billion “techno-turkey.”

Fortunately, both Hubble and the shuttle were built with servicing in mind. The shuttle got a robotic arm for rendezvous and capture, and Hubble was built with two grapple fixtures and astronaut-friendly handholds, latches, and modular instruments that could be changed out during spacewalks. These were the features that allowed astronauts to fit the space telescope with the corrective lenses that saved Hubble’s vision and NASA’s reputation. Since then, Hubble has become a phenomenal scientific success story with major astronomical discoveries being made in rapid succession, servicing mission after servicing mission. The public appreciation of this type of science exploration has also been very gratifying.

Looking back over the past fifteen years, I believe that four major elements made this success possible: developing architecture, bringing fresh technology to orbit, looking toward the future, and collaborating. As we move forward with Constellation, these are the things that should keep NASA on the path to success.

I define “architecture” as the collection of hardware, individuals, and facilities needed to achieve major goals. History has taught me that the architecture needs to be developed in conjunction with transportation systems and astronaut capabilities. Trying to retrofit an in-space servicing capability to concepts and hardware for which it was not originally planned costs time, money, heartache, and additional risk.

Modularity is the heart of serviceability and the secret to project cost-effectiveness. When you build subsystems and systems as clean, separate modules with minimal mechanical, electrical, and thermal interfaces between them, you’ll see how much more quickly they can be integrated and tested, and how much money that saves. At Goddard Space Flight Center, modular spacecraft were designed and flown on several missions, including Solar Max, Compton Gamma Ray Observatory (GRO), Landsat 4 and 5, Extreme Ultra-Violet Explorer, Upper Atmosphere Research Satellite, Ocean Topography Experiment/ Poseidon, and several Department of Defense missions. In these programs, modularity reduced mission integration times by as much as half. Since integration and testing costs account for onethird of program cost, a 50 percent reduction in the integration and testing times results in significant program cost savings. 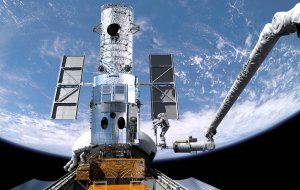 For most scientific and Earth operational programs, proper architecture is the most significant factor in limiting project costs. Solar Max, Weststar, Palapa, Syncom IV, GRO, and Intelsat VI were all repaired and put back into operation without a separate servicing investment during development. Not one dime was budgeted for satellite servicing.

From time to time as new programs are initiated, study managers comment that incorporating servicing into their design would drive up the design cost. This is because they are working with designs that do not take advantage of modularity. Experience shows that these designs are inherently more expensive, both because of the longer integration and testing times and the fact that they are not easily and quickly repairable on the ground, let alone in orbit.

On-orbit servicing of satellites such as Hubble dramatically accelerates the rate of scientific discovery by bringing instruments with the newest and freshest technology to orbit.

As new technology becomes available, spacewalking astronauts fit Hubble with the latest, most advanced instruments and replace components that would otherwise wear out and limit the telescope’s life. Each visit increases the telescope’s capabilities by at least a factor of ten. On the fourth servicing mission, scheduled for later in 2008, we are taking two instruments to orbit that have twenty to twenty-five times more observing power than the instruments we’re bringing back home.

For most scientific and Earth operational programs, proper architecture is the most significant factor in limiting project costs.

If you have the ability, whether with robots or the Constellation crew vehicle, to carry things to your orbiting facility, you can make changes, upgrade, service, repair, recover, and rescue. And if you manage carefully, you can take brand new technology to orbit on a planned, periodic basis. Things wear out. Technology becomes outdated. The ability to upgrade is a real asset, because technology for items such as detectors, optics, electronics, computers, and communication systems continues to get better exponentially. As we have learned through Hubble and on-orbit servicing, you can keep your astronomical observatory or other satellite at the cutting edge, useful, and relevant, to address the latest scientific questions.

As an agency, we must think ahead. If, as many of us believe, the Constellation architecture is capable of more than just ferrying people from Earth’s surface to the International Space Station or the moon, then let’s start thinking now about how to modify and augment Orion to make in-space servicing possible. A grapple arm fixture and a storage location to carry reasonably sized instruments can be designed into Orion now. Trying to do it ten years from now, when the hardware is built and moving out to Cape Canaveral, will be too late and too expensive. If the investment is already being made for transportation now, let’s make sure the capabilities for servicing are there, too.

Every NASA program and project manager—including those on the Constellation program—must look toward the future as they prepare hardware so they can take advantage of systems as they come online. Think through what you want your systems to be doing ten to twenty years into the future. If you cannot modify the elements of your architecture to achieve all the goals that you want in space, at the very least do not preclude the potential for upgrading later. Allow for expandable architecture.

Although there are no plans for servicing Hubble after the 2008 servicing mission, we’re going to be attaching a soft capture mechanism to the aft end of the telescope. At a minimum, this will allow some type of robotic or human rendezvous and docking and for Hubble de-orbiting. A grapple fixture is going to be installed on the James Webb Space Telescope (JWST) even though there are no plans to service or upgrade it. What if our capabilities change ten years into the future and JWST has a problem? At least there will be something onto which a robot or a manned vehicle can connect during a rendezvous docking and repair attempt. Even if we are not going to service these satellites in orbit, we should make them modular so we can replace power systems, communication systems, and detector systems simply during ground integration and testing.

In the case of the Crew Exploration Vehicle, we have been making the point for designers to provide attach points and the capability of controlling robotic systems from the vehicle. Cargo storage provisions need to be added to the service module. If you can’t design your architecture with a general-purpose, widely applicable system, at least design it so it can be easily upgraded in the future. Think about the future now and don’t make the future hostage to the decisions you make today. 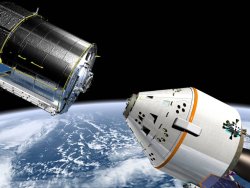 By the same token, observatories need to be designed with higher degrees of modularity. It makes no sense to bury a fine guidance telescope control system in the middle of an instrument or instrument cluster. Think of what that does to program cost when one has to remove and reintegrate the science instrument to repair a failed control system component on the ground, let alone in orbit. NASA Administrator Michael Griffin said, “It’s dumb to put big money in big systems that cannot have their lives extended, serviced, and repaired if necessary.”

The future has a claim on the present. There’s an enormous penalty to be paid for lack of foresight.

The Hubble Space Telescope project, through its engagement with multiple NASA Centers and contractors, has been best served by the “collaborative relationship” and “badgeless society” approaches to project management. In a collaborative relationship, everyone on the team works together in a nonthreatening atmosphere. This approach encourages inclusion and the realization that coworkers are all part of one NASA family, and it attracts the best of the best technologists from around the world. In a badgeless society, multimember teams work side by side, and those with the best, most appropriate skill sets lead particular aspects of the job, irrespective of center or company affiliation. These two approaches to project management are particularly equalizing, empowering, and effective.

For example, during the development of new solar arrays for the first servicing mission, the European Space Agency (ESA/Estec) encountered difficulties in testing bi-stem shields to the rigors of solar space environment. To solve the problem, we went to Glenn Research Center to develop a special ultraviolet/ free atomic oxygen test facility, and they conducted a series of evaluation tests. Eight years later, when we were developing rigid gallium arsenide arrays for Hubble Servicing Mission 3B, we went to ESA/Estec because they had developed a large-diameter solar-illuminated thermal vacuum facility (the best in the world) to test a new array for thermal-induced jitter.

It is important to avoid the common pitfalls of multicenter participation, with assignments of center efforts based on their technical merits. Partners should coordinate and communicate information and requirements but not direct how the work is to be done. We have to shun short-sighted tendencies, including insisting that “it has to be done my way”—getting hung up on the “how” and losing sight of the “why,” the shared goal. Centers have to earn and establish trust in each other, and center directors have to take ownership of the partnering activity.

By forging multicenter strategic alliances, partners gain access to the unique strengths of the centers. These symbiotic relationships offer experience that no one center can achieve. Strategic technologies enable each center to develop and advance unique technologies, so they can be offered to other centers. Communication is the key to collaborative success. Each center needs to communicate its strategic technologies, and through communication and trust, centers must eliminate center-tocenter divisiveness and needless competition. In addition, program offices must avoid stovepiping tendencies that further hinder the application and advancement of new technologies across the Agency.

From Hubble to Constellation

Time is running out. Constellation is moving ahead. It’s like a train that’s moving faster and faster down the track. It’s time we hop on and start providing trailblazing missions that demonstrate the usefulness of these new systems. We can and must apply the lessons learned from Hubble to Constellation. This doesn’t have to be expensive. For example, a pathfinder can demonstrate that you are adding mechanical bolt-down and electrical interfaces (scars) to Orion so it can be used for repair and servicing in the future.

We did it with shuttle, we can do it with Orion. It’s just a question of whether or not we have the willpower, common sense, and foresight.

Frank J. Cepollina serves as deputy associate director for the Hubble Space Telescope Development Project at Goddard Space Flight Center. He is known as the “Father of On-Orbit Servicing” for his decades of leadership in repairing and upgrading satellites in orbit. In 2003 he was inducted into the National Inventors Hall of Fame.