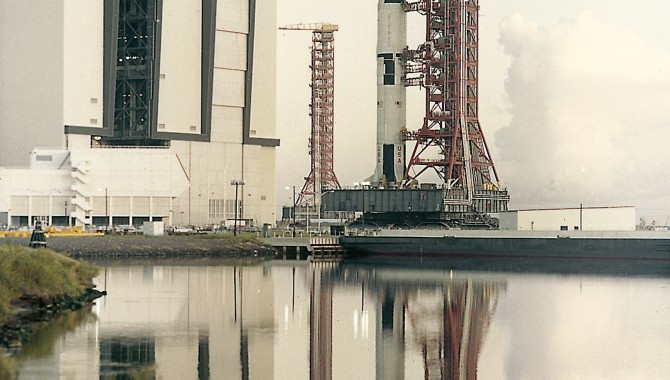 As told to Tracy McMahan and Matthew Kohut by Phil Sumrall

A Chance Encounter at the Barbershop

I was fortunate enough to accidentally meet Dr. Wernher von Braun on a Saturday morning in the early spring of 1962 at a downtown barbershop in Huntsville, Alabama. I was waiting my turn, and Dr. von Braun came in and happened to sit down next to me. He had a number of papers in his hands, and he was thumbing through more papers in his briefcase. 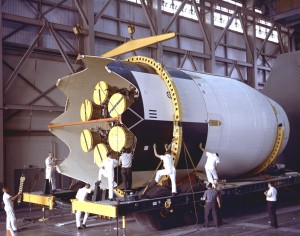 He worked for a while—I would say a half hour or so—and then he put his papers away, closed the briefcase, and struck up a conversation. Of course, I knew immediately who he was; he had no idea who I was. He was very, very friendly, very charming. He asked me what I was doing, and when I told him I was teaching math and science in a local private school, he asked about what classes I had taken in college, what I had studied, what my major was, and that sort of thing. I was amazed at how curious he was about everything.
He wanted to know every course that I had taken, basically what the courses covered and what kind of grade I had made and so forth. We had a lot of time to wait, and he interviewed me pretty thoroughly, and at the end of it he said, “Well, have you ever thought about working in the space program?”

I answered honestly that I had not. He said, “Well, if you ever decide that you would like to work in the space program ….” He gave me a name and phone number and said to call this individual. “Tell him that you and I have talked, and that I thought there was a place for you at Marshall Space Flight Center,” he said. At that time, I was not seriously considering changing careers. However, a few months later in June, after the school year was out, there were reasons that I decided I perhaps didn’t want to return for another year.

I called the personnel office and eventually talked with the individual who Dr. von Braun had recommended. Turned out he was the director of the personnel office at Marshall, and he arranged an interview the next day with Helmut Bauer, who worked in the aeroballistics area. He told me that they would offer me a job, and I was called by personnel the very next day and formally offered the job. I reported to work the second of July 1962.

Engineering Then and Now

I worked primarily on the Saturn V, and looking back on it now, we just didn’t have good analytical tools at all. It was very primitive. For example, one of the things that I worked on was dynamic stability and wind response. The vehicle is not a rigid body. It may look rigid, but it bends, and that little bit of bending corrupts the signals to the rocket-control sensors. The vehicle may be going absolutely straight, but if it’s slightly bent, the sensor may think it’s deviating from its path and try to bring it back on course. When it does that, it may cause it to bend more, and may start an oscillation that, instead of damping out, builds up. Couple that with the fact that you have propellant tanks that are quite large, and the propellant sloshing in those tanks creates enormous forces, which in turn can cause the vehicle to bend. It is all a complex set of system interactions.

I was working for Helmut Bauer, who was considered one of the foremost experts in modeling propellant slosh. We had to build analytical models, and we had relatively crude computers compared with what we have today. We just didn’t have the tools to make complex models. 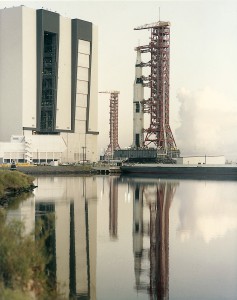 We built the Dynamic Test Stand facility, which at the time was the tallest self-supporting structure in the state of Alabama. We built that so we could put this gigantic Saturn V in there and excite it and actually measure its bending characteristics. From that, we would validate the analytical models and design the control systems. Today we have discussions about whether we even need to build the large, structural test articles for ground vibration testing because our models are that good. Back in the Saturn days, we built these large test facilities and all the structural articles and did the best we could analytically, and we still weren’t confident we had it right. The power of the models that engine designers have today is just beautiful.

We test a lot in the wind tunnel now, and a lot of what we do is calibrate and validate the computational fluid dynamics, which would not have been possible in those days because we didn’t have the computational capability to build very sophisticated models; aerodynamic flows are very complex and require extremely large and fast computers. We find now that we can avoid a lot of wind-tunnel tests with the aerodynamic analytics that we generate through computational fluid dynamics. That’s just one example of how far the models have come in the past several years.

The Saturn I was a very large vehicle, at that point the largest vehicle that had ever flown. From it we learned a number of lessons that we still apply today. We built the Saturn I primarily out of existing materials. That is, we took the H-I engines that already existed for another application within the Department of Defense, we took the RL-10 engines that already existed for the Centaur, and we took the tooling that existed for building some of the ballistic missiles. The Redstone missile that was developed at Marshall had a 70-inch-diameter tank. The Jupiter, a later variant, had 105-inch-diameter tank. With the Saturn I, we developed what we call the cluster concept. That’s part of why it was so dynamically difficult. We took that 105-inch Jupiter tank and used the Redstone tooling so we could build the Jupiter tank quickly and at lower cost. Then we built eight of the Redstone 70-inch-diameter tanks and clustered those around that center core Jupiter tank. The center core and four of the 70-inch tanks contained liquid oxygen, and the other four contained the RP-1 (rocket propellant 1), a rocket grade of kerosene. That’s what we fed to the H-I engines on the Saturn I.

By clustering tanks that were made from existing tooling, using engines that already existed for both that and the upper stage—we used the RL-10s on the upper stage—we were able to put together the Saturn I primarily using existing things. We’re doing that today in the Ares I and Ares V: taking things that already exist and putting them together in a new and creative way. 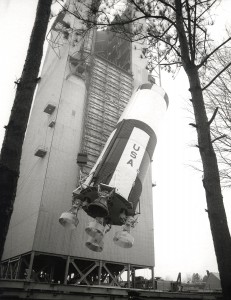 Engineers and technicians at the Marshall Space Flight Center placed a Saturn V ground-test booster (S-IC-D) into the dynamic test stand. The 300,000-pound SI-C stage is being lifted from its transporter into place inside the 360-foot-tall test stand.
Photo Credit: NASA Marshall Space
Flight Center

I think the most important lesson we learned from Saturn V is the importance of robustness. In the spring of 1968, we flew the second Saturn V. We called it SA-502. SA-501, which was the first flight of the Saturn V, had been a nearly flawless example of how a big launch vehicle should operate. But we had a whole myriad of problems on the second vehicle. We experienced a severe first-stage oscillation in the thrust. It would go up and down in a way that caused the vehicle to be periodically in compression. We called it the pogo effect because it goes up and down like a pogo stick.

Then, during second-stage flight, we had the experience of having to shut down an engine because we were getting an indication that there was a potential catastrophic failure, so we sent a command to shut the engine down. It had five J-2 engines, and we sent a command to shut down the problem engine before it catastrophically failed. To be sure, we sent a second command from a different source to make sure it shut down. Unfortunately, the wiring to the engines was wrong, and so instead of shutting down that engine, we shut down the opposite engine, which was a perfectly good engine. Instead of having five engines, we had only three, yet the mission continued.

When we got into the burn of the S-IVB, the third stage, there was a fuel line that began to shake violently and cause some oscillations, and we actually threw off one of the spacecraft lander adapters—the SLA, as we call it—the spacecraft lunar excursion module (LEM) adapter, and one of those panels failed. So, we had pogo in the first stage, we had an engine out in the second stage and cut off a wrong engine, had this oscillation in the third stage, and had a structural failure in the spacecraft LEM adapter. All those problems, and yet we still made it to orbit. 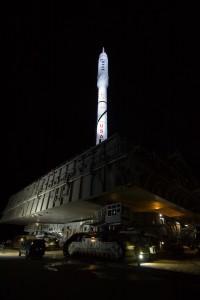 The 327-foot-tall Ares I-X test vehicle, brightly lit against the night sky, rides aboard a crawler-transporter for the 4.2-mile trip to Launch Pad 39B.
Photo Credit: NASA

We had the decision to make whether we were going to fly another test flight of the Saturn V vehicle, unmanned, or whether we would put people on the next one. Now, remember, we had just had all these failures. Although we limped into orbit, we’d had a lot of near disasters. But we had enough robustness in the system, we thought we understood the failures, and we corrected all those things. We added accumulators on the first stage to take care of the pogo problem. We made sure that the wiring was right on the second stage. We changed the attachment of the line that had oscillated on the third stage, and then made a structural change to the SLA. We had all those things fixed, and we had enough confidence in that vehicle’s robustness that we committed to send humans. That was Apollo 8. We’re trying to build that same kind of robustness into the Ares family today.

Finally, I would say we learned the importance of safety from the Apollo program. We had the tragic fire on the launchpad during the checkout of Apollo I that took the lives of Gus Grissom and Ed White and Roger Chaffee. Although that particular failure had nothing whatever to do with the Saturn, it was part of the Apollo program, and all of us felt that very deeply. That moved us all very much.

I think that today, safety is our number-one criterion. When we picked the launch vehicle that we today call Ares I, we analyzed many concepts and picked the Ares I on the basis that it was the safest of all. Our goal is to make the Ares I ten times safer than any launch vehicle ever flown. We are continuously learning from our past and improving the designs of our future systems.