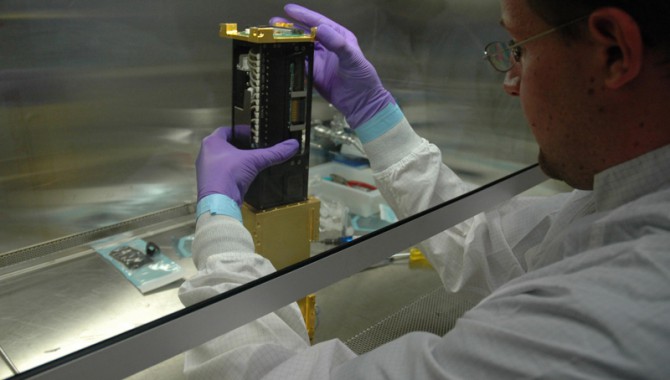 Satellites that can fit in a backpack are shrinking technology, reframing satellite science, and providing valuable mission training and experience to the next generation of engineers. 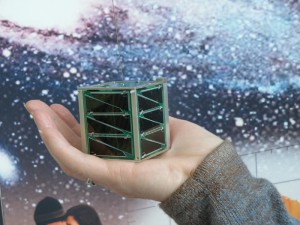 They come in sizes small, micro, nano, and pico, with masses ranging from 500 kg (small) to 1 kg (pico). Over the past two years, global interest has grown rapidly in satellites a fraction of the size of Sputnik 1 (a beach ball weighing about 80 kg), which are ushering in a new era of missions and engineering opportunities.

A decade ago, two professors concluded that educational satellite missions took too long and were too expensive. There had to be a better way to do them, thought Jordi Puig-Suari of California Polytechnic State University (CalPoly) and Bob Twiggs, then at Stanford University. “Education satellites were not performing the education tasks well enough,” said Puig-Suari. “They were too complex, too large, and we had to change it.”

The change came when Twiggs went down to a plastics store in Mountain View, California. After working on the Orbiting Picosatellite Automatic Launcher satellite that carried six Klondike-bar-sized picosatellites into space in January 2000, Twiggs sought to make picosatellites more cubical to support more solar panels. The store had what he needed to bring his vision to life: nearly cubical plastic Beanie Baby boxes. “And that’s how it came about,” said Twiggs, “modeling with a Beanie Baby box, a four-inch cube.”

Twiggs’s group at Stanford started developing a satellite bus—the subsystems that support the satellite—to house the picosatellite payload while Puig-Suari’s group at CalPoly went about developing a deployment mechanism called the Poly Picosatellite Orbital Deployer (P-POD). The result was CubeSat, a 10 cm3 picosatellite weighing 1 kg. Three fully autonomous CubeSats can be configured together to form a nanosat no larger than a loaf of bread. (Nanosatellites are those that are less than 10 kg.)

Engineers at Ames Research Center started collaborating with Twiggs. John Hines, currently the chief technologist of the Engineering Directorate at Ames, maintains close relationships with the university programs that propelled the NASA Small Satellite Program into action. “Our whole nanosat program is based on the shoulders of the university nanosatellite activities and the CubeSat activities,” said Hines. 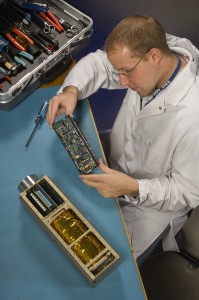 Ames conducted a pilot study, asking scientists to think about the kinds of science that could be done on nanosatellite platforms. Satellite experiments involving biological specimens typically had to be taken into space, brought back to Earth, and then analyzed after their return. Miniaturization of analysis systems offered an alternative: do everything in space. “The idea to analyze and do all of your processing and measurements in situ was something that had not been done a lot,” said Hines. A partnership developed between Ames and three California universities: Stanford developed the satellite buses, CalPoly provided the P-POD, and Santa Clara University performed the mission operations. After ensuring that the hardware under development at the universities met NASA standards for spaceflight projects, engineers at Ames began to hone their understanding of nanosat capabilities and then push them further.

Because of their size, the value of nanosats has often been overlooked. “Everybody laughed at us,” said Twiggs, laughing. “They said, ‘That’s absolutely the dumbest idea we’ve ever heard of. Nobody’s ever going to do anything with those toys.'” “Four or five years ago,” Hines recalled, “people would pass by and look at these things as toys. Now you see [those same people] showing how they are building their own and starting to have their own programs.”

University satellites are primarily geared toward education and training. For NASA, nanosats offer a low-risk, low-cost, low-visibility platform for innovation, as well as the ability to use launch vehicles that are not designed for large spacecraft. “We’re starting to do real science, real technology validation, and risk reduction, and gain flight heritage on new techniques and technologies. It’s still a spacecraft, and it’s still a mission,” said Hines. “It has every element and every aspect of a large spacecraft, just smaller and less expensive and sometimes less complicated. But it has all the pieces, all the elements. It’s managed exactly the same. We use the same flight project management standards—7120.5D—that big missions are required to do for all NASA missions. You have to go through the whole design, development, integration, test, missions operations, and management processes just as you would for a full mission.”

With their low cost, risk, and visibility, small satellites can offer an excellent training opportunity for hands-on learning.

Puig-Suari said that the biggest constraint in the field is mind-set, not resources. “People are trying to shrink a big spacecraft,” he said, “but if you do it that way, it’s not going to work.” He believes the way people think about the capabilities of nanosats is shifting. “People will initially say, I cannot put my component on that box because my component was designed for a big spacecraft,'” explained Puig-Suari, “but now we’re starting to have people say, Okay, what can I put inside that box?'” Early versions of nanosatellites included Bio NanoSat and GeneBox, which carried a variety of organisms and molecules such as genes, bacteria, and yeast cells. These nanosatellites paved the way for the development of NASA’s first deployable, autonomous nanosatellite, GeneSat. “We started to miniaturize something that we already thought was impossibly small into something even smaller,” said Hines. GeneSat launched in December 2006, taking nanosatellite experiments to a new level of visibility in the aerospace community.

With a majority of NASA’s engineers currently eligible for retirement, the next generation coming up through the ranks has a lot to learn before the knowledge of those leaving walks out the door. With their low cost, risk, and visibility, small satellites can offer an excellent training opportunity for hands-on learning. “As a seasoned project manager, I have a responsibility, just as my peers did when I joined the agency, to train the next generation of space enthusiasts and spacecraft developers,” said Mark Boudreaux, project manager of the Fast, Affordable, Science, and Technology Satellite Huntsville (FASTSAT-HSV) microsatellite at Marshall Space Flight Center. 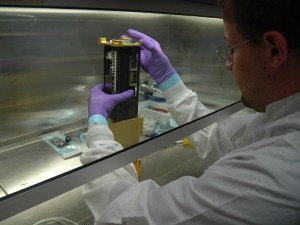 Small satellite missions also offer young engineers the opportunity to acquire and practice essential engineering management skills such as team communication and project documentation, regardless of their specific area of expertise. “We want to make sure that we’re training those replacements to continue the things we worked so hard to get to,” said Hines. “You get the discipline of having to see something all the way to the finish rather than doing it as a school exercise, doing something that you’ve done on paper design and then you’re finished,” he said. “You’ve got to make the thing work.” At the university level, Puig-Suari sees a noticeable change in how students approach their projects. “Interacting with industry really puts them in the right mind-set as far as the quality levels, level of seriousness, and documentation,” he said. “You need to prove that it works, write it up, and show it to the right people.”

In August 2008, Boudreaux and Hines saw NanoSail-D (Marshall) and PRESat (Ames) take off on the third SpaceX Falcon 1 from Omelek Island, one of the Marshall Islands in the Pacific. The launch vehicle never reached orbit and plunged into the Pacific Ocean.

Despite the launch failure, there were lessons learned. “We learned a lot about the integration process,” said Boudreaux, noting that this was their first involvement with Falcon. “That was a new paradigm for us.” Working with new commercial launch providers offered valuable experience. Two years prior to the Falcon launch, the Ames team had configured GeneSat to launch on the Orbital Sciences Corporation’s Minotaur-1 rocket. “We were able to look at different launch-integration capabilities, different launch sites, different launch operations, different mission and range considerations, as well as [gain experience in] deploying a spacecraft and payload to a very, very remote launch site,” said Hines. The remote location of the SpaceX Falcon launch site tested NASA’s ability to react to a launch delay. The launch vehicle was grounded long enough for the specimen to expire and forced NASA to replace the living specimen inside PRESat. “We got a big operational logistics effort under our belt with that as well,” Hines said. 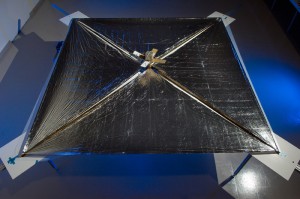 The quick turnaround from authority to proceed to launch was also notable. Marshall started integrating NanoSail-D into an Ames CubeSat in November 2007, delivered the product in April 2008, and launched the following August. “There were processes that we streamlined,” said Boudreaux. “Sometimes these things can take years, but this took months, providing valuable insight into private-sector processes. We learned a lot about a short, tailored, very efficient, fast development process.” There were also cross-agency benefits. “Ames transferred knowledge to us,” said Boudreaux. “We learned from Ames the important elements associated with building a CubeSat.” The relatively low cost of the satellites made it possible to build backup units. While PRESat and NanoSail-D never made it into space, their twins still have a chance.

Before nanosatellites, satellite projects were primarily limited to well-funded, established space programs. This is no longer the case. Nanosats have opened up space exploration to a wider world. The CubeSat program has expanded to South America, Asia, Europe, and South Africa. “The playing field has leveled,” said Puig-Suari. “A lot of people are doing it.” He cited the launch of Colombia’s first satellite, Libertad-1, a 1-kg picosatellite. “Those guys were so excited. It was a very simple spacecraft, but it had national implications.”

Next year, the Department of Defense Space Test Program will launch several NASA small satellites, including the Organics and/or Organisms Exposure to Orbital Stresses (O/OREOS) managed by Ames, and the second NanoSail-D managed by Marshall. These nanosatellites will be two of six instruments riding on FASTSAT-HSV-1—a spacecraft bus designed to carry multiple experiments to low-Earth orbit—which will be launched aboard an air force Minotaur-4 launch vehicle from Kodiak Island, Alaska. The second NanoSail-D is a proof-of-concept demonstration of a miniaturized solar sail that Marshall hopes to build on a large scale for solving propulsion and space travel concerns. “It’s a stepping stone to larger-class technology,” said Boudreaux.

For Ames, nanosats are stepping stones toward a new class of missions. O/OREOS will investigate how components of life like amino acids respond to radiation and microgravity, one of many missions in line for nanosat technology.

Scientists are starting to get interested. Biologists were the first to see the potential, followed by astrobiologists and astrophysicists. Now nanosat programs are popping up at places like the National Science Foundation, the National Reconnaissance Office, and the air force.

From the National Science Foundation’s space-weather nanosats to the Cube50 project, which will launch fifty nanosats into the lower thermosphere (dubbed the “ignorosphere” because so little is known about it), to the even smaller femtosatellite called PocketQub Twiggs is currently developing, the capabilities of these satellites are only just emerging. Nanosats are not replacements for their larger counterparts; they offer another approach to spaceflight. “People started saying, Wait a minute, what else can I do with this?'” said Puig-Suari. “And it was just a chain reaction at that point.”