Back to Top
Home/45/ASK Magazine/Something to Shout About: Bloodhound Supersonic Car 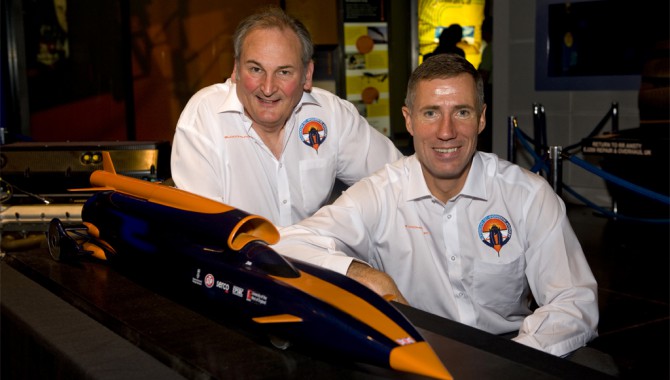 The Bloodhound Supersonic Car aims to set a new land-speed record and a new standard for openness in projects. 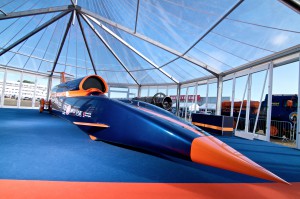 Project Director Richard Noble and his team are building a car that will go from 0 to 1,050 mph in 40 seconds. Named after Britain’s 1950s Bloodhound Missile Project, the Bloodhound Supersonic Car (SSC) car is 12.8 meters long, weighs 6.4 tons, and cruises on high-grade aluminum wheels, which will experience radial stresses of up to 50,000 times the force of gravity at full speed.

The project is risky, dangerous, and unprecedented. Focused on building the safest car possible, Noble’s Bloodhound team intends to overthrow the current FIA World Land-Speed Record by 30 percent. “It’s such a huge leap, of course we’re going to get into trouble,” said Noble. “Were going to learn an awful lot as we develop it.”

World records aside, the team wants to capture the attention of students and inspire a new generation of engineers.

In 1898, French driver Gaston de Chasseloup-Laubat set the world land-speed record at 39 mph. Fast-forward to 1970 when, after decades of battle between the Americans and British, an American-built car called Blue Flame set a new record of 630 mph. “We in Britain were very keen to get it back again,” said Noble. “Or, at least, I was,” he laughed.

Noble assembled a team to build a new car, Thrust2. With Noble literally in the driver’s seat, Thrust2 set a new record of 634 mph in 1983, sparking a race for the sound barrier.

Building and modeling cars intended to travel upward of 600 mph was difficult, dangerous, and nearly impossible. Noble had pushed the limits with Thrust2. “The [aerodynamic] data was varied and not reliable,” said Noble. What designers needed was a transonic wind tunnel with a sort of car treadmill capable of speeds up to 900 mph, he explained. It didn’t exist.

During the 1960s, there had been a new airplane every year, which got kids excited and motivated them to become engineers. Drayson told Noble and Green that was the goal: They could have their engine if they agreed to start an education program with their project.

With competitors already at work, Noble decided to throw his hat into the Mach 1 race with Thrust SSC. This time around, Chief Aerodynamicist Ron Ayers insisted on modeling the car. Software programs in the early 1990s facilitated new ways of using computational fluid dynamics (CFD) to model Thrust SSC, but Ayers wanted to confirm their results. The team went to a long rocket test track, normally used for accelerating warheads up to Mach 3 and slamming them into slabs of concrete, and used a modified rocket sled to test their CFD data. They ran thirteen tests of their car. “Amazingly, we found there was just a 4 percent variation in the data,” said Noble. This proved that the car was safe and viable.

In 1997, Thrust SSC went supersonic five times in the Black Rock Desert of Nevada. Fifteen miles away in the town of Gerlach, the sonic boom knocked the covers off a classroom sprinkler system. “We all said that we would never, ever do this again,” said Noble. Little did they know they weren’t done—with building supersonic cars or rattling educational establishments.

Meeting with the Minister 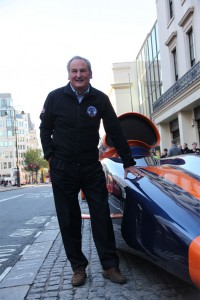 After Thrust SSC’s run, the late Steve Fossett, a world-renowned aviator and sailor, expressed an interest in overtaking the new speed record. If they waited, Noble and his team would spend five years studying how Fossett bested them, and then another six years building a defender. “We all looked at each other, got slightly grey-haired, and decided eleven years was too long,” said Noble. “We’d better do it now.”

The new car, the Bloodhound SSC, would shoot for 1,000 mph. Two jet engines on the car entailed too many design difficulties. A combination of one jet engine and one rocket motor was more feasible. Lightweight, small, and fuel efficient, the Eurofighter-Typhoon EJ200 jet engine would be a perfect fit. However, there was only one place to get the engine: Britain’s Ministry of Defence.

Driver Andy Green arranged a meeting with then-UK Science Minister Lord Paul Drayson, who formerly held a post in the Ministry of Defence. Drayson also happened to race cars. “The meeting remained very friendly until I asked him for the jet engine,” Noble chuckled. Sensing they had failed dismally, they started to retreat from the room.

Then Drayson said something that changed all of our lives, said Noble. “He said, ‘Look, there’s something you could do for us.’ I said, Of course, Minister, what can we do for you?” Drayson explained that the Ministry of Defence was having a problem recruiting engineers. There didn’t seem to be any in Britain anymore. During the 1960s, there had been a new airplane every year, which got kids excited and motivated them to become engineers. Drayson told Noble and Green that was the goal: they could have their engine if they agreed to start an education program with their project.

Noble agreed and shook Drayson’s hand. “We walked out of his office intent on setting up an enormous education program, which we knew nothing about,” Noble said.

Noble’s team went to work researching the state of education in Britain. “We found all sorts of terrible things were happening,” he said. Britain’s skilled workforce was on the decline, its students were sliding in international rankings, and the country’s information technology sector was dismal. They needed to create an Apollo effect—to inspire people to change their lives because of this project. 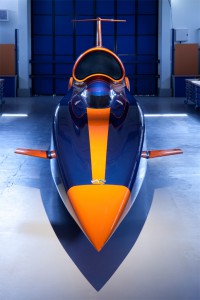 With their posters and a model of the car, the Bloodhound team attended education exhibitions across the country, talking to as many STEM (science, technology, engineering, and mathematics) teachers as they could. Their conversations went something like this:

“Absolutely awful. It’s an absolute nightmare. The kids aren’t interested. They are very arrogant. All they think they need to know how to do is add, subtract, and work percentages.”

Their conversations proved enlightening. “We needed to do something exciting,” said Noble, “but above all, we had to be able to share the information.” If they were going to educate Britain, teachers needed to be able to understand the charts, models, and drawings so they could make new lesson plans and explain it to their students. Every aspect of the project had to be accessible.

This lack of secrecy initially worried the Bloodhound team. Then they realized that their fears were unnecessary. The only rules for the land-speed record are that the car must have at least four wheels and be controlled by the driver. “All of the cars and all of the challengers are completely different,” said Noble. “The technology simply won’t transfer from one competitor to another. We realized that we could make all of the data available. Absolutely everything.”

Nitrous Oxide: Not So Funny

The Bloodhound team is blazing a new trail. They still have many challenges to overcome but have learned a great deal so far. One particular lesson came from choosing the oxidizer for their hybrid rocket motor. The team thought it had an easy answer: nitrous oxide (N2O). Safe, reliable, and easily accessible, N2O seemed a sensible choice. Not so, warned one of Noble’s peers—N2O is not to be trifled with.

Noble investigated the claim. After scouring the web, his team found a paper from 1936 that explained how pressurizing N2O beyond 13 bar (or about 190 psi) could cause an explosion. “Whole plants had been taken out by nitrous oxide explosions,” explained Noble. Nitrous was also the culprit in a 2007 Scaled Composites explosion that killed three people. The Bloodhound team was shocked.

They selected high-test peroxide (HTP) as an alternative that is less likely to set off an explosion. Testing with smaller rockets has been successful, with the rocket motor running at 98 percent catalyst efficiency. The team is currently doing testing on the full-scale motor.

The Team: Grey to Green 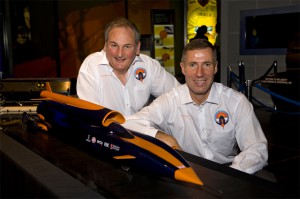 Chief Rocket Engineer Daniel Jubb worked the N2O problem. He joined the Bloodhound team in 2005 when he got a call from Noble for a meeting. Highly recommended by several seasoned rocket engineers, Noble drove out to Manchester to meet Jubb. “I discovered that I was face to face with a guy who was twenty-three,” said Noble.

From Jubb to Ayers (who is in his eighties), Noble respects the importance of having a generationally diverse team. Typically, young engineers only see one part of a project. Rarely do they see the whole life cycle. “Getting the overview perspective is very, very important,” said Noble. The project is demanding but offers young engineers (the youngest is eighteen) the opportunity to gain tremendous experience and acts as a stepping stone to a future career.

“It’s very important from our point of view to use as many young people as we possibly can,” said Noble. He finds the younger generations rapport with technology enormously useful. “But, of course, they’ve got to be able to contribute to the project,” he said. The flat structure of the Bloodhound organization facilitates this. Everyone has his or her own set of responsibilities and authorizations, and everyone in the organization is empowered. “Anyone can go fail the project if they wanted to,” said Noble. “One would think this is some sort of undisciplined rabble, but it’s certainly not.

“You end up with a very, very fast-moving, highly motivated organization and, therefore, can do [great things] on very small sums of money,” he continued. (Thrust SSC was completed for 2.4 million, 12 percent of what their competitors budgeted.)

Something Incredibly Wonderful Will Happen

Partway through the project, Noble and his team realized there was a flaw in their openness plan. “If we were going to put up all of the operational data after each run on the web, we’d have to be very clever about the way we actually presented it,” said Noble. “Unless people were given the appropriate education, they wouldn’t understand the data. It would just be numbers to them, and they wouldn’t really be able to take part in the program.”

Taking the lead from the highly successful Khan Academy, Noble partnered with Southampton University to develop educational tools the public will need to engage with the Bloodhound SSC data flow. Today there are 4,600 schools in Britain and 207 countries worldwide participating in the Bloodhound engineering adventure, as the team preps for their 2013 run in South Africa. Via the Bloodhound SSC web site, anyone can be a part of the project through games, videos, pictures, explanations of the car elements, drawings, and blog posts from Noble. Just months ago, the team posted a suite of forty computer-aided design drawings online to help people understand how the car was designed and built. There have been approximately 2,500 downloads of the drawings.

“It might well be that someone makes a [copy], which would be brilliant,” chuckled Noble. “We could race!”

Richard Noble and Andy Green with a model of Bloodhound SSC.