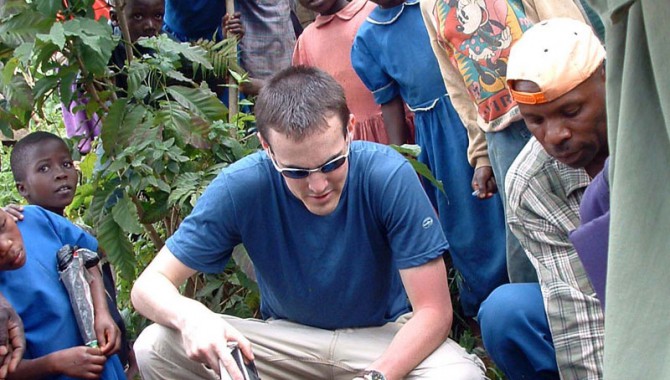 According to the World Bank, more than 1.1 billion people do not have access to clean, safe water, and 1.6 million children die each year as a result of illness related to inadequate water supply and sanitation. 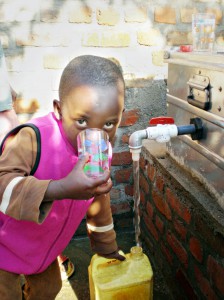 Engineers Without Borders USA (EWB-USA), a volunteer organization, is working to change that.

Founded in 2001 at the University of Colorado, EWB-USA has grown to more than 250 chapters comprising 12,000 volunteers working in 45 developing countries. One of the founding volunteers, Evan Thomas, began working at the Johnson Space Center in 2004 and started a local chapter for the NASA center. In their time off from work on human spaceflight, NASA engineers, scientists, astronauts, and contractors work with local professionals and students to help solve energy and water-supply problems in areas much closer than space, but still challenging to reach. In the process of serving those communities, they have developed skills that serve their NASA work as well.

Every EWB-USA project requires careful planning, because a solution that has worked in one location may not work in another. For example, a water-treatment system in Rwanda the Johnson chapter worked on required a very different approach than a system in Aguilar, Mexico, another community in which they’ve worked.

Traditional water systems for developing communities often begin with drilling wells. If wells aren’t feasible, other options such as water protection, rainwater catchments, and point-of-use water treatment, which are small-scale systems that may treat a couple liters per hour, are used. None of these proved to be a perfect solution for Rwanda. “It’s so mountainous, wells aren’t feasible. So densely populated, you can’t isolate areas for source-water protection. It’s so poor and densely populated, point-of-use systems aren’t practical. You’d have to distribute millions of them, and people can’t afford the replacement costs,” Thomas explained.

Rwanda needed a new solution. “We looked at all these options and didn’t see anything that we could adapt, so we ended up inventing our own water-treatment system,” Thomas said. The result was a gravity-fed system that runs water first through a gravel filter, then a rapid sand filter, and then through a solar-powered ultraviolet disinfection system. According to Thomas, “It’s kind of a hybrid between the small-scale, simple technologies and the higher-tech, higher-volume technologies.” The system can treat up to 50,000 liters of water a day for 3,000 people, and it can be maintained for less than one-fifth of a cent per liter—about one cent per gallon.

Above: The system can treat up to 50,000 liters of water a day for 3,000 people and it can be
maintained for less than one-fifth of a cent per liter—about one cent per gallon.

The process—from identifying a community in need to implementing a solution—can take years. EWB-USA wants to ensure all volunteers involved not only present viable, sustainable engineering solutions, but also commit to seeing their projects through to implementation. Planning, review, and commitment are key parts of EWB-USA’s success in managing projects around the world, even in the most remote areas.

Before anything is built, a few members of a chapter will visit a community to learn more about its needs and resources. “We sit down with the community members; identify what their critical public health needs are; work with them on what we might be able to contribute, what they’ll be able to contribute, potential timeline; and then go back and start developing technologies,” said Thomas. This initial visit also helps begin the partnership that is crucial to these projects succeeding. 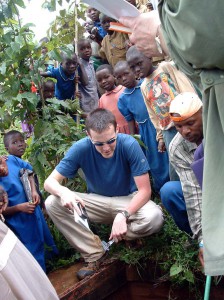 “The first time you go to a community and see they aren’t drinking clean water, you want to get back as soon as you can to solve that problem,” said Dan Garguilo, a systems engineer at Johnson and current president of the EWB Johnson (EWB-JSC) chapter, “but we still have a lot of steps and project approval processes to ensure that what we’re doing is going to be sustainable and appropriate and maintainable by whatever community we’re working in.”

Every project requires at least a five-year commitment from volunteer chapters, during which time members of the community will learn about the system and how to maintain it. Only a few members of the team that helps design, build, and test new systems in Houston make the journey for installation, since traveling to Rwanda is expensive. Cost also prevents engineers from being able to fly in to make repairs or replacements on any system they install, so EWB-USA partners together closely with the communities they help to ensure people within the community are trained on the minimal maintenance the water-treatment systems require.

Relying on local maintenance and supplies requires any EWB-USA engineering system to be a relatively low-tech, sustainable, and functional solution. “We call it ‘appropriate technology,'” said Thomas. “Our water-treatment system is a good example of that. We use gravity, which is always there, plus gravel, sand, and drums that are available locally.”

The only high-tech element the Johnson chapter used in their water-treatment system at a local orphanage was an ultraviolet light, which could treat thousands of liters of water a day instead of a couple of liters an hour. “Our decision to use an ultraviolet light was not trivial,” Thomas explained. “It’s important to make sure we have a supply chain for replacing, properly disposing, and maintaining those lights.”

The limited time, people, and resources available to EWB-USA creates a challenging environment in which to problem solve when things go wrong. “We prototype all our systems in Houston and try to work out all the kinks here, but you never get everything figured out,” explained Garguilo. “Without fail there’s always a new problem that presents itself. You don’t want to leave not having a project implemented, so there’s a lot of scrambling and trying to problem solve on the go in places where you can’t pop down to a hardware store. You have to figure it out right there with whatever you brought with you or what you can find locally.” 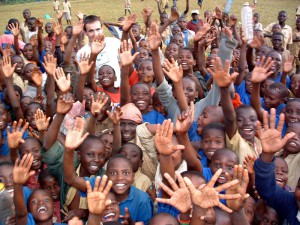 During one trip, the volunteers discovered a problem that compromised the entire water-filtration system at an orphanage—two days before they were scheduled to leave. “Most of the projects we’ve done have been a variation of a rapid sand filter for clean water. The concept is pretty straightforward: filtering water through sand,” Garguilo explained. “When you buy sand here in the states, you can buy nice, clean, sifted sand. The sand we got locally in Rwanda, people went down to the beach for. We were prepared for that. We brought the necessary equipment to sift the sand to get the right particle size, but it’s very dirty. How do you clean sand without reliable access to water?”

The orphanage helped the EWB-JSC engineers by grabbing the jerricans they use to haul water and retrieving water from a nearby lake so the sand could be washed. What the volunteers didn’t know was that some of the cans had previously been used to haul kerosene.

“We were running water through the system to clean it, and we started to smell something,” recalled Garguilo. “It was in the middle of the night, too. Since time is of the essence, and it gets dark at 6:00 p.m., we oftentimes work well past darkness.”

They realized the next morning the entire system was coated with oil from kerosene residue. “You couldn’t just go grab a hose and plug it in somewhere and start flushing out the system,” Garguilo said, “we had to find something locally that could work. Luckily, we happened to find some apple blossom shampoo a previous volunteer had left. Of course, soap reacts with oil to break it down.”

The volunteers poured the shampoo into the system to rinse it as best they could, and there was just enough soap to break down all the oils and flush out the system. “The water smelled like apple blossoms for a little while, but it was at least clean,” Garguilo recalled with a chuckle. “The smell eventually washed out, but that was one of those, ‘Oh no, we’re screwed,’ moments. Working with limited resources is always a challenge.” Learning from the Challenges

Many of the Johnson volunteers find themselves using their field experience from Rwanda and Mexico at their day jobs, not the other way around. Their hands-on experience and problem solving with EWB-USA has proved helpful when they are designing systems for space.

“We’re working in extreme environments in both cases,” said Garguilo. “When you have to plan project implementation in the developing world, you have a finite amount of money and resources to do the project; it’s almost like working in space. You have to plan everything out to the nth degree, account for all the tools you’re going to need, know what materials are available for you. You have to work efficiently and take your environment into consideration. All these things are similar to when we’re working on ISS [International Space Station] or other planetary missions.” 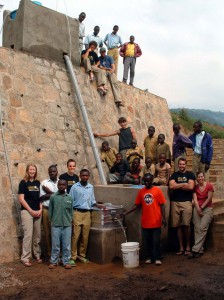 EWB-USA volunteers after the installation of an early water-treatment system. This design has evolved into iterations treating water across the country.
Photo Credit: EWB-JSC/Evan Thomas

If the water processor on ISS failed, engineers would not be able to see or touch the system, and the information they could receive about the problem would be limited. “That’s similar to when I’m sitting in my apartment in Houston and I have a really sketchy e-mail trying to explain why my water-treatment system in Rwanda isn’t working anymore,” said Thomas. “That’s a challenge, but it also makes you think about how you design these systems and how you train people to maintain these systems to keep them simple so they don’t fail all the time.”

EWB-JSC gives engineers an opportunity to build and repair systems in Rwanda relatively quickly compared with systems in space; they also benefit from being able to work on a project from start to finish. “It takes a long time to develop this technology at NASA,” said Thomas, who works in water recovery and water management systems in the life-support branch at Johnson. “Most civil-servant engineers don’t get to spend too much time in the lab or tinkering with hardware. Through EWB-USA, I’ve gotten my hands dirty, I’ve built water-treatment systems, I’ve implemented them, and we’re treating drinking water for people on a daily basis. All that research, all that development effort, all that experimental design and implementation, I truly think makes me a better NASA engineer.”

Volunteering with EWB-JSC also gives people who normally wouldn’t work together within NASA a chance to collaborate, creating a network for sharing knowledge and mentoring that might not have happened otherwise. “It’s a vibrant community,” said Thomas, “and it’s helped my day job. People that I normally would never have worked with, now I know them and can call them up. Knowing who the experts are and where and being able to call directly is invaluable. When you’re getting dirty in the field, it really helps you get to know somebody.” NASA center volunteers also partner with local university and industry volunteers, expanding their knowledge network to outside the agency as well.

EWB-JSC continues its work with the people of Rwanda and Mexico on a regular basis, helping install new systems and maintain existing ones. Despite the distance, the communities and EWB-JSC make every effort to stay connected through e-mail, phone calls, and periodic visits.

The relationships go both ways. Astronaut Ron Garan, who volunteered with EWB-JSC and has since created a non-profit organization to help with EWB-USA’s maintenance efforts, made certain the children of the orphanage in Rwanda knew that he had not only become a part of their community, but they had become a part of his. Last year, he flew photos from the orphanage with him into space, and those photos now hang in Rwanda for the community to enjoy.