The energy of outstanding performers can be measured.

It’s no surprise that success in project-based organizations is driven by how well project teams perform. The quality of performance depends not only on the demands of the project but on the team makeup and dynamics. In fact, those human factors can have a much greater impact on results than the challenges of complexity and scope. Collaboration, communication, leadership, and effective knowledge sharing are vital to success, and the “spirit” of teams matters at least as much as their technical skill.

We’ve all seen teams that succeed beyond anyone’s wildest dreams. They seem to be driven by more than great processes, good communication, and individual heroics. They exude an infectious energy, outwardly and among their members. Talk of energy in teams is often relegated to the list of “intangibles” that may find their way into promotional documents or performance reviews but do not trump the “numbers.” But we all have people in our work lives that we gravitate toward to get a “boost” and others we avoid because they “suck the life out of you.” The effects of energy are real and important. Furthermore, energy in organizations can be studied and the results used to improve performance.

Over a six-year period, we measured the impact of energy on large and small teams of a large engineering/construction company. The results of the studies verified our intuition about the importance of energy. We have found that it has direct impact on leadership, performance, engagement, and project delivery. We measured the energy within a global information-technology (IT) team of 160 people. Using organizational network analysis, we created network diagrams that map the connections among individuals in an organization. Specifically, we focused on energy networks. Energy was measured by asking a simple, powerful question: When you interact with this person, how does it affect your energy level? The responses ranged from “strongly de-energizing” to “strongly energizing.” The patterns that emerged from the energy maps were then used to develop and grow teams within a changing organization.

Work by Rob Cross and others identifies behaviors that create energy. They include creating a compelling vision, having the opportunity to contribute meaningfully, being fully engaged in an interaction, seeing progress through interactions, and believing in a worthy and attainable objective. These conditions create an infectious can-do mentality among individuals and teams. 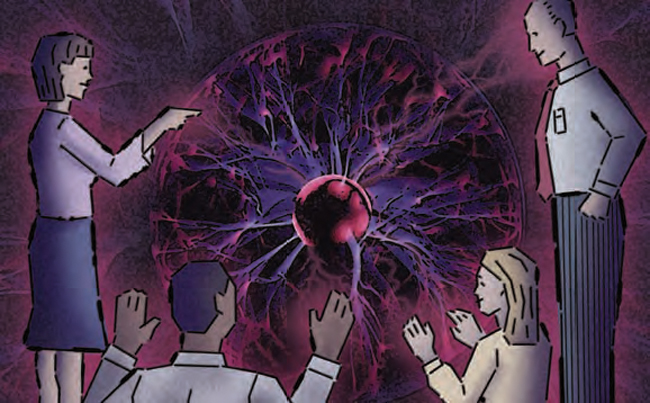 An Example: Energy and Leadership

Colleen began her career as a trainer providing information to civil engineers on new software applications. Her ability to deliver this information effectively engaged even the stodgiest engineers. Thanks to her skill, she was given an opportunity to begin managing small IT projects. She was adept at this task, too, and began to excel under the tutelage of her supervisor; pursuing a project management career path was exciting to her.

When her company merged with another engineering company, the regional IT functions were merged. Her project management abilities were quickly recognized by the new company. Informal comments circulated about her abilities and the “energy” she brought to projects. She was positive, yet doggedly persistent in meeting objectives on time. When the IT function in the company transitioned from regional to global, Colleen became part of a newly formed global Project Management Office (PMO) under the guidance of her longtime supervisor. With her strong training background, she was primarily responsible for communicating and teaching the global IT community about the new PMO practices; the rapid adoption of those practices showed how effective she was. She was sought after to manage the most difficult and challenging IT projects. Recently, an opportunity to direct the services for the Americas portion of the IT unit came along and she was selected to fill this role, moving her from leadership in project management to leadership of a regional service function—one step below the chief information officer (CIO).

Her success was driven, in large part, by how she engaged with her teams and coworkers. The energy measurements over these six years indicate that Colleen was rated as energizing by 95 percent of her network ties, compared with the group average of 75 percent.

Colleen is one example of the relationship between energy and effectiveness (and success). Of those receiving the highest evaluations over time, one rose to be CIO, another became a division director reporting to the CIO, and another rose three levels to global functional director. Like Colleen, these individuals were rated as energizing by more than 90 percent of their contacts. Highly placed individuals who, on the other hand, received more “de-energizing” scores either left the company over time or were asked to leave.

The importance of energy is not limited to leaders. Cross and his colleagues note that energizers are “more likely to have their ideas considered and put to action, get more from those around them, attract the commitment of other high performers, [and] impact what individuals and networks as a whole learn over time.”

Collecting both performance and energy data, we found high performers in the IT team were consistently rated as energizing by 77 percent of their connections. Average performers were rated as energizing by only 59 percent of their connections. The energy difference between average and low performers was only 7 percent. Energy appears to make the difference between high and average performance in this IT team. The individuals who have high energy scores were more likely to be in leadership roles in the organization or move into them over time.

Energy makes a difference in team performance as well. In 2007, an important project to migrate the existing company to a new e-mail system began. The project languished for almost twelve months, not getting past the planning phase. Then team leadership and a few other core team players were changed to jump-start progress. The project was completed in six months. The energy data revealed that the original core team members were viewed as “energizing” by only 43 percent of their connections; the second core leadership team energized 87 percent of their connections. An even starker contrast between these teams was the energy scores of the sponsor and project manager. The sponsor and project manager of the original team energized only 26 percent and 30 percent of their connections; the replacement sponsor and project manager energized 90 percent and 64 percent, respectively. Based on these observations, we strongly believe that energy and performance at the individual and team level are closely linked.

Jack was a member of the IT team dating back to globalization in 2003. Between 2003 and 2007, other team members indicated that he had high relative energy. Between 2003 and 2008, though, the percentage of people working with Jack who found him energizing dropped from a high of 94 percent to 56 percent. Shortly thereafter, Jack left the organization.

In Jack’s case, the number of energizing ties was an indicator that his job satisfaction and level of engagement had changed. We found the same trend with other individuals who voluntarily left the organization—the year before their departure, energy scores dropped by an average of 10 percent. So energy can be an indicator of employee engagement, and analysis can help management identify employees at risk of leaving.

Individuals with higher “energizing” scores exhibited a lower turnover rate in the six years than those that were identified as “de-energizing.” On average, those who left the firm were rated as de-energizing by 45 percent of their contacts, compared with those who stayed with the firm, who were rated as de-energizing by only 16 percent of their contacts. Such results can help identify key team members as targets for retention efforts.

While a focused network survey will provide the clearest analysis, you can get insight into the energy level in your group by asking and answering these questions:

Is there a compelling vision and mission for the team? A well-articulated, clear, and meaningful vision differentiates energizers from de-energizers. Energized teams look to future possibilities rather than past problems.

Are deadlines met? People tend to follow through on commitments when they are energized by the activities.

Are ideas freely offered and discussed? People are energized when they feel they contribute to the team. When an idea is rejected, does the individual who proposed it still feel they have been heard and given a fair chance?

It is also possible to identify energizers within groups. They are the people who

Individuals with these characteristics are likely to be the main energy sources on their teams. As you plan for the future, make the most of those energizers by placing them in visible leadership roles. Modeling energizing behaviors yourself also helps to propagate energy. When leaders energize others, energy has a tendency to pass down through the organization. Developing energizing behaviors may require shifts in behavior, leadership philosophy, or maybe even core values, but the great positive impact of energy on performance makes the effort worthwhile.

Alexandra Gerbasi is an assistant professor of sociology at California State University, Northridge. Her work focuses on social networks, trust, and social capital. Her book (with Dominika Latusek), Trust and Technology in a Ubiquitous Modern Environment: Theoretical and Methodological Perspectives, was recently published.

Christie Dowling is an environmental engineer at MWH with a passion for enhancing connections between people and groups to streamline work processes and increase reapplication of knowledge.

Vic Gulas is the former chief people and knowledge officer at MWH, where he led the knowledge management, IT, and human resources strategies along with key global implementations. Recently retired from MWH, he helps nonprofit and for-profit companies leverage their knowledge for business.