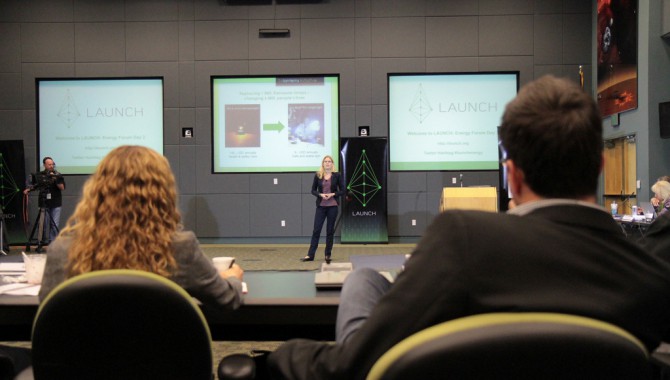 In the fifth floor conference room of Operations Support Building (OSB) II at Kennedy Space Center, Craig Jacobson switched on a small blowtorch. He held it to the end a strange-looking fire poker that consisted of a small, thin disc on one end and a power outlet on the other, with a light bulb attached. When the disc flashed white-orange, the bulb switched on. The disc, a 5-dollar-fuel cell invented by Jacobson in his garage, is an energy innovation he believes will empower people living off the grid and change the world.

Jacobson was one of 10 innovators selected to participate at the LAUNCH Energy Forum at Kennedy Space Center November 10-11, 2011. The event was a partnership that included NASA, USAID, Nike, and the State Department. The innovations ranged from cutting-edge technology to I-can’t-believe-I-didn’t-think-of-that solutions, and aimed to tackle some of the gnarliest energy problems in the world.

Jacobson and the nine other innovators had 30 minutes to present their energy innovations to a council of thinkers, venture capitalists, architects, designers, biochemists, and engineers, and then to answer their initial questions. That was the easy part of their day. After a break, the real work started. The 30-plus council members divided into five tables in the room. For the next two-and-a-half hours, the innovators fielded difficult questions and absorbed valuable feedback during 30-minute “impact” sessions that took advantage of the council members’ insights and experience. The sessions were tiring yet energizing, challenging yet encouraging. Above all, they were necessary to give the innovators their best shot at changing the world.

Where Ideas Take Off

Too often forums and conferences are structured inefficiently. The agenda often distracts from the most productive part of these two- or three-day events: the conversations that happen outside the ballroom in bars and over dinner. LAUNCH created the environment in which these conversations could take place during the day. 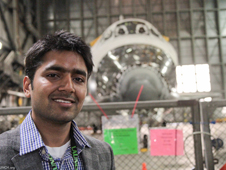 Two days before the event, the innovators were coached on how to give a short talk that told a compelling story for their morning presentations. The format resembled a TED talk. The innovators had less than twenty minutes to convey the genesis of their innovation, how it worked, why it mattered, and what they needed to fully realize it. The remaining time was left for questions.

The afternoon sessions resembled the after-hours talks that take place over a cocktail—only more intense and focused. The innovators shared their strengths and weaknesses with the council members, and in return they received feedback: “Have you considered a joint venture?” “Your innovation seems to have applications outside of what you’re proposing. Have you considered them?” “I think you have a great idea, but I don’t see how you’re going to turn a profit.” “Have you considered outsourcing the manufacturing to another company?” “I have a contact who is looking for someone like you. I’ll make the connection.”

The sessions provide the innovators with an overwhelming amount of recommendations, advice, strategic direction, and ideas. The next challenge will be to chase down those opportunities in the months after the forum.

“To innovate is a human-to-human interaction,” said Jacobson. “When we get into a room with a lot of high-quality people, those interactions go up by factors of ten. The ideas take off.”

The forum reached beyond the walls of OSB II at Kennedy. The talks were streamed live via NASA TV and USTREAM. (The video will be posted soon to Vimeo and YouTube.) Key updates, images, and insights were captured, tweeted, and re-tweeted through the official LAUNCH Twitter account, @launchorg. A hashtag, #LAUNCHenergy tagged the ongoing conversation. If someone wasn’t physically present, they could be virtually present.

The afternoon session conversations were captured using an application called MindMapr. Still in its beta test, the tool was operated by designated note takers who followed each innovator from table to table. The conversations were recorded and displayed in the form of “Twitterfalls” and word clouds on the many television screens around the room. The result was a sort of “virtual eavesdropping” as Beth Beck, Space Operations Outreach Program Manager at NASA and LAUNCH organizer, described. It was possible to know what was happening across the room without actually sitting at the table.

Similarly, it was also possible to get a flavor for the conversations happening without actually being in the room. Through these online outlets, an entire community of virtual participants became part of the unfolding stories of the LAUNCH forum.

To Whom Much Is Given…

“To those whom much is given, much is expected,” said Mikkel Vestergaard Frandsen, LAUNCH capacity and resource partner and CEO of Vestergaard Frandsen, quoting President John F. Kennedy. The forum was only the beginning. It is called LAUNCH, after all. Unlike usual forums where it ends and everyone goes home, the LAUNCH innovators have work to do. Armed with the valuable insights and advice from the impact sessions, the innovators will receive individual support from the LAUNCH team to integrate and act on the recommendations they received.

As the forum came to a close, it was apparent that a community was forged with the intention of leveraging “collective genius for a better world.” “For NASA, LAUNCH is about sharing the sustainability story, share its problem-solving expertise with innovative problem solvers from around the world, and promote transformative technology to solve the problems that we share as global citizens of this planet,” said Beck. “This may also address issues of long-duration life in the extremes of space.”

“It’s been three months since we came into existence,” said Yashraj Khaitan, LAUNCH innovator and CEO of Gram Power, ”but it’s after these two days that I really feel like we’ve launched.”

Nina Marsalek, LAUNCH innovator and COO of The Solanterns Initiative, presents to the LAUNCH council.