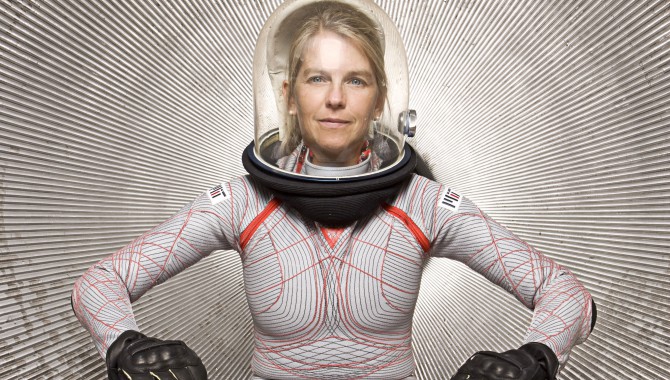 For the past dozen years, I have been working with colleagues and students here at the Massachusetts Institute of Technology (MIT) and with collaborators in various disciplines from around the world to develop a new kind of spacesuit. 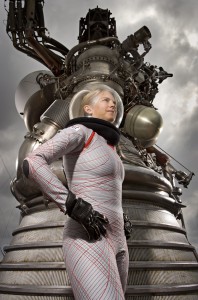 My hope is that the astronauts who some day walk on the surface of Mars will be protected by a future version of what we are calling the “BioSuit™.”

The suits that kept NASA astronauts alive on the moon and those worn by Space Shuttle and International Space Station crewmembers for extravehicular activities (EVAs), including the Hubble repair missions, are technological marvels; in effect, they are miniature spacecraft that provide the pressure, oxygen, and thermal control that humans need to survive in the vacuum of space.

The greatest problem with these suits is their rigidity. The air that supplies the necessary pressure to the bodies of wearers turns them into stiff balloons that make movement difficult and tiring. These suits are officially known as EMUs—extravehicular mobility units—but they allow only limited mobility. Astronauts who perform repair work in space find the stiffness of spacesuit gloves especially challenging: imagine manipulating tools and small parts for hours wearing gas-filled gloves that fight against the flexing of your fingers.

The suppleness of these gloves is improving. Aerospace engineer Peter Homer has won two NASA Centennial Challenge competitions with designs that add an X-shaped bit of fabric to finger joints, creating a kind of hinge that increases dexterity. But that improvement, though significant, has been made within the context of the fundamental limitations of a glove that remains a gas-filled bladder.

Future space exploration will be expensive. If we send humans to Mars, we will want to maximize the work effort and science return. One contributor to that efficiency will need to be a new kind of spacesuit that allows our explorer-astronauts to move freely and quickly on the Martian surface. That could be the BioSuit.

A New (and Old) Approach 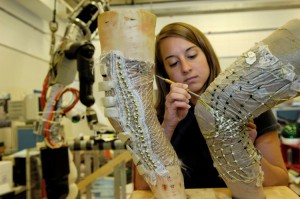 The BioSuit is based on the idea that there is another way to apply the necessary pressure to an astronaut’s body. In theory at least, a form-fitting suit that presses directly on the skin can accomplish the job. What is needed is an elastic fabric and a structure that can provide about one-third of sea-level atmospheric pressure, or 4.3 psi (approximately the pressure at the top of Mt. Everest). The skintight suit would allow for a degree of mobility impossible in a gas-filled suit. It also would be potentially safer. While an abrasion or micrometeor puncture in a traditional suit would threaten sudden decompression puncturing the balloon and causing a major emergency and immediate termination of the EVA—a small breach in the BioSuit could be readily repaired with a kind of high-tech Ace bandage to cover a small tear.

The mechanical counter-pressure spacesuit is not a new idea. Physiologist Dr. Paul Webb introduced the concept in the late sixties and developed a prototype in the early seventies. It was a great idea that came before its time, in my opinion; advanced materials that could exert the necessary pressure on the skin were not available then. In addition, the wearer needed help getting Webb’s prototype suit on and off (as do astronauts donning and doffing existing spacesuits), which results in expensive downtime for astronauts. A really practical BioSuit would be one the wearer could don and doff herself in, say, less than ten minutes.

In the late nineties, colleagues and I revived Webb’s innovation and began work on second-skin spacesuit designs. Our hypothesis was that new developments in materials (for instance, Spandex and its more sophisticated polymer descendants) plus supportive patterning of the material could make a successful counter-pressure suit feasible.

Thanks to some funding from the NASA Institute for Advanced Concepts, we were able to gather a team to begin the practical work that would test our hypothesis. Students have been part of the core team from the beginning. Like most research at MIT, the spacesuit work is about teaching as well as practical results. MIT engineers and biomedical engineers are part of the team, as is Jeff Hoffman, a professor who has flown on five shuttle missions, including a Hubble repair. As someone who has worn and worked in current operational spacesuits, he can use his experience to tell us where we may be going wrong in our design.

Collaborators outside the MIT community include Trotti and Associates, an architectural and industrial design firm in Cambridge, Mass.; engineers from Draper Laboratories; and Dainese, an Italian manufacturer of motorcycle racing “leathers”—leather and carbon-fiber suits designed to protect racers traveling at up to 200 mph.

Bringing together designers from Trotti and Associates and students from the Rhode Island School of Design and my MIT engineering students has greatly influenced the way our groups work. In our early sessions together to realize a second-skin spacesuit, my engineering students spent much of their time hunched over their laptops, calculating and analyzing the governing equations, while the designers—visual thinkers—took out sketchbooks and immediately started drawing to attack the problem. After working together for weeks, the engineers got more comfortable with the idea of sketching solutions and some of the designers added Matlab and its more analytical approach to their repertoires. We all ended up better off.

We have “collaborated” with researchers from earlier eras, too. Not only Paul Webb (still active, he is an advisor to our team), but also Dr. Arthur Iberall, a physicist who did important work on mobile spacesuits. He died in 2002, but his daughters—happy to see his work continued—gave me access to his papers. We have expanded his great idea of a pattern of three-dimensional lines on the body that do not extend by deriving the mathematical representation and visualization of what I call a soft exoskeleton and structure for the BioSuit. There is also Dr. Karl Langer, the nineteenth-century Austrian anatomist who experimentally studied and mapped the tension lines in human skin. 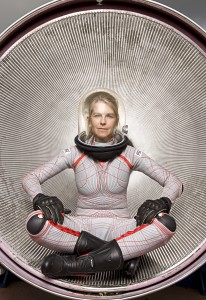 Iberall’s and Langer’s work informed our thinking about possible patterning designs for our suit, and we’ve patented our innovations. Elastic fabrics alone cannot provide the essential combination of sufficient pressure and flexibility we need, especially at knees, elbows, and finger joints. (The flexible parts of the body are the biggest challenge, of course.) Laminating our mathematically derived web of less-flexible lines, or the soft exoskeleton pattern, to our elastic compression suit has gotten us closer to the necessary pressure production goals, and we’ve exceeded our mobility and flexibility performance goals.

Tremendous challenges remain before we can vacuum test a complete BioSuit, and that will be only one step on the road to an operational system that astronauts could wear in space. So far, we have been testing leg prototypes in a vacuum chamber at MIT. We are within striking distance of our pressure goal. Adding wearable sensors to the suit is another challenge that we are working on currently, and we’ve designed a new gas-pressured helmet, one that is closer fitting than current globe-shaped helmets. We would like to give astronauts the ability to turn their heads and look over their shoulders, which means designing a new kind of airtight joint between the helmet and the rest of the BioSuit.

There is also the question of how to package life support for the suit. The large backpack that supplies oxygen, thermal control, and other necessities to current spacesuits tends to unbalance astronauts working in partial-gravity environments. We have tapped into the professional diving community for help designing a new life-support system for the BioSuit, perhaps a modular one to allow astronauts to carry only what they need and provide quick bottle changes for their extreme exploration assignments.

Given a full core team of about a dozen people (which we do not have presently because of lack of funding), I think we could have a complete suit ready for testing within three years. But, as with any research and development project, it is important to keep an open mind in this process. We even need to be willing to accept evidence that our idea wont work. (So far, fortunately, we haven’t found any deal breakers; our results suggest that the BioSuit is technically feasible and could become a practical reality.) And we have to consider alternatives that may prove more practical than our original concept, though not as elegant—for instance, a hybrid suit that combines mechanical counter-pressure arms and legs with a gas-pressurized trunk.

We started this work with a vision of bio-suited explorers on the surface of Mars. That is still our goal, but for the past five years we have received National Science Foundation funding for applications on Earth that are also exciting.

We have been working with colleagues at Children’s Hospital in Boston, Harvard’s Wyss Institute, Boston University, and Draper Laboratory to see if we can use our technology and engineering designs to help infants with brain damage that affects motor skills, children with cerebral palsy, and stroke victims, who typically lose motor skills on one side of their bodies. The idea is first to use BioSuit “sleeves” with built-in sensors on the legs to measure movements—to understand, for instance, how much motion and kicking by infants is typical and compare that with the limited kicking and motions of children with cerebral palsy. The next step—a big one—is to add actuators that can enhance and direct movement. In the case of cerebral palsy and stroke victims, that would be a way of giving back some of the lost motion. People with cerebral palsy expend a lot of energy moving and have stiffened muscles; our BioSuit technology and know-how could guide movement and enhance mobility to make it more efficient. And because the brains of newborns are still so plastic, enhancing the natural kicking of infants with potential motor problems from brain damage might actually reshape the motor programs and partly “heal” their brains.

Like an operational bio-spacesuit, the biomedical applications are in the future, but we are making encouraging progress. In the process, we are learning about materials science and biomechanics; creating diverse cooperative communities of engineers, designers, scientists, and artists; and training a new generation of creative engineers. The possibilities are endless. How about putting actuators on a skintight spacesuit to give astronauts more-than-normal speed and agility? No one knows how far we can go. Stay tuned.

Dava Newman is professor of aeronautics and astronautics and engineering systems at the Massachusetts Institute of Technology (MIT). She is also the director of the Technology and Policy Program and a Margaret MacVicar faculty fellow. Her expertise is in multidisciplinary research that combines aerospace biomedical engineering, human-in-the-loop modeling, biomechanics, human-interface technology, life sciences, systems analysis, design, and policy.