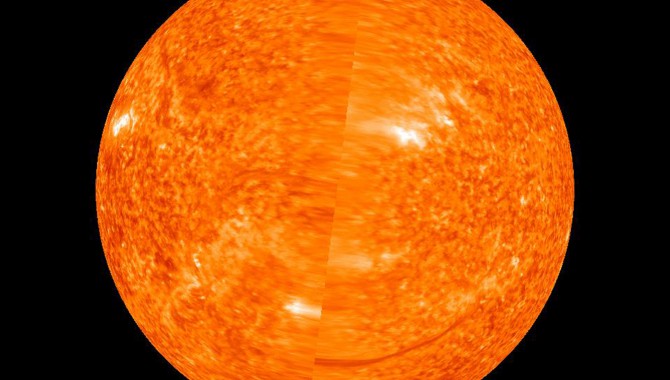 We inhabitants of Earth have an intimate and complex relationship with the sun. As we learn more about the underlying physics driving the magnetic ball of plasma that is essential for our very existence, the complexity of that relationship becomes increasingly apparent. 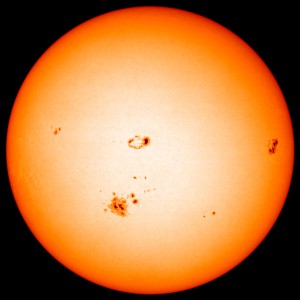 The field of solar physics has made incredible strides over the past fifty years. Even so, we find ourselves in a vulnerable period of time due to our increasing dependence on technology. What does the sun have to do with technology? The sun has a dark side, so to speak—a moody shift in behavior that generates space weather with the potential to threaten satellites, power grids, and astronauts. To understand the origins and implications of space weather, we must get up close and personal with the sun.

The enigmatic sun provides scientists with plenty of puzzles to solve, including the coronal heating problem, why the eleven-year activity cycle occurs, and why structures on the solarsurface become unstable and release enormous amounts ofenergy. Through sophisticated observations and models, solar physicists are delving further into these fundamental questions and surfacing with some intriguing results.

NASA’s contribution to the progress made in solar physics is invaluable, both historically and during the past five years. The Solar Dynamics Observatory (SDO), launched in February 2010, is producing full-disk imaging of the sun in ten white-light, ultraviolet, and extreme ultraviolet band passes, taking one high-resolution image every second and allowing scientists to study the details of the origins of space-weather events. The Solar Terrestrial Relations Observatory (STEREO), two nearly identical spacecraft that in effect slowly drift in opposite directions away from Earth by about 22 degrees per year—one ahead of Earth in its orbit, the other trailing behind—has provided us with images of the sun from two additional vantage points since 2006, allowing 3-D measurements to study the nature of coronal mass ejections. For the very first time, we are able to see an entire 360 degrees around the sun, ensuring we don’t miss a thing.

For the very first time, we are able to see an entire 360 degrees around the sun, ensuring we don’t miss a thing.

Not only does NASA have its eye on the entire sun all the time through its SDO, STEREO, and Solar and Heliospheric Observatory (SOHO) missions, it has a fleet of missions dedicated to understanding how the variable sun affects us in the near-space environment of Earth, as well as its effects on other planets and the edge of the solar system.

These new and better observations are helping us unravel some of the sun’s most baffling puzzles.

One of them is why the outermost layer of the solar atmosphere, the corona, is heated to much higher temperatures (millions of degrees) than the underlying layers, even though it is further from the core, the source of all solar energy. This counterintuitive fact has bothered scientists for decades. Energy is deposited in the corona by some not-yet-established mechanism referred to as coronal heating. Recent progress toward understanding this enigma offers new and exciting possibilities.

Many theories have been suggested through the years, but a couple of provocative recent studies have grabbed the spotlight. A group of scientists from Lockheed Martin, NCAR (National Center for Atmospheric Research), and the University of Oslo suggest that the chromosphere (the cooler, middle layer of the atmosphere) provides the corona with a mass supply via small, ubiquitous cool jets of material called spicules that are constantly shot up into the corona. Although spicules have been observed for decades, this newly identified spicule, referred to as “type II,” is shorter-lived (by about 100 seconds) and more dynamic (by about 50 to 100 km/second) than its classical counterpart. The discovery was enabled by observations from SDO and Hinode, a Japanese-led international mission to study solar magnetic fields. This recent work emphasizes the importance of the chromosphere, a region that has typically been neglected in understanding the heating of the solar atmosphere.

Recent discoveries by a team led out of the University of Colorado have shown that the energy in a late-phase flare (approximately one in seven flares experiences an aftershock about ninety minutes after the flare dies down, called the late phase) can exceed the energy of the primary flare by as much as a factor of four.

Another theory addressing the coronal heating problem deals with small-scale flares, or “nanoflares,” which occur millions of times every second across the sun. As noted in papers in 2010 and 2011, researchers at Goddard Space Flight Center present observational and theoretical evidence that suggests much of the corona is heated by small bursts of energy, or impulsive heating, that occurs within a magnetic flux strand. Turbulent motions at the solar surface “stir” the coronal magnetic field, causing it to get tangled and stressed until it breaks, releasing a small burst of energy called a nanoflare. Unlike larger solar flares, which can be viewed by satellites and ground-based telescopes and can disrupt electronics and communications networks on Earth, nanoflares are so small that they cannot be resolved individually, so no direct evidence of nanoflares was seen until recently. The ultra-hot plasma cools very quickly, which explains why it is so faint and difficult to detect. Modeling of nanoflares and type II spicules and the subsequent comparison of simulations to observations is ongoing. Scientists hope to discover which mechanism dominates, bringing us one step closer to solving the coronal heating puzzle.

The much larger, energetic cousins of nanoflares are the flares were all used to hearing about—the phenomena that produce the most powerful explosions in the solar system. Recent discoveries by a team led out of the University of Colorado have shown that the energy in a late-phase flare (approximately one in seven flares experiences an aftershock about ninety minutes after the flare dies down, called the late phase) can exceed the energy of the primary flare by as much as a factor of four. That’s quite a punch for what is already the most energetic phenomenon in the solar system!

Sunspots are often the birthplace of solar flares, and although they are historically the longest-observed solar phenomena, they are not excluded from recent discoveries. Helioseismology, the science of studying wave oscillations in the sun using an approach similar to that used in earthquake detection, allows a glimpse into the solar interior where sunspots are waiting to emerge. Helioseismologists learn what is under the surface by studying acoustic waves traveling throughout the sun’s interior. Submerged magnetic fields (like those found in sunspots) affect the sun’s inner acoustics, allowing detection prior to their breaking through the surface. This has Stanford researchers excited about the implications for predicting where sunspots will appear on the solar surface. 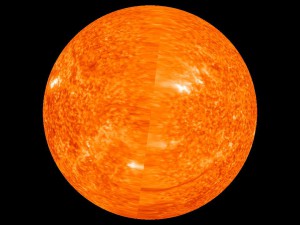 First complete image of the far side of the sun taken on June 1, 2011.
Photo Credit: NASA/STEREO

One of the surprises the sun has thrown at solar scientists recently is the deep, extended solar minimum that we just emerged from, a period of time during which the sun had very few sunspots, flares, and big eruptions (or coronal mass ejections). In 2008, no sunspots were observed on 266 of the year’s 366 days (73 percent of the time). The last time a year had more spotless days was 1913, which produced 311 days of a blank sun. Solar minima (and subsequent maxima) are expected to occur about every eleven years on average. The switch from a perfectly normal series of activity cycles to an extended solar minimum is keeping many scientists busy trying to explain why the last cycle was twelve and a half years long, while the one before it was ten and a half years long. Out of the twenty-four numbered solar cycles, only four have started more slowly than this one. Now that the new cycle has finally begun, solar scientists are still being surprised by the suns behavior.

By studying different aspects of the solar interior, the surface, and the corona, some scientists from the National Solar Observatory and the Air Force Research Laboratory have found evidence that the next solar cycle (number 25) may be very different from what were used to. A missing solar jet stream, slower activity near the poles of the sun, and a weakening magnetic field (leading to fading sunspots) are raising eyebrows. The start of Cycle 25 may be delayed, with an ultra-extreme minimum. Or not—as we’ve experienced in the recent past, the sun may also show its unpredictable side and surprise us all during the next cycle. 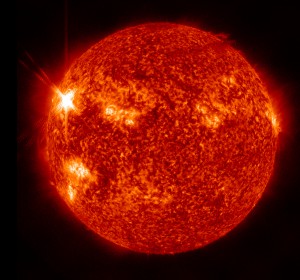 SDO captured this image of an X 1.9-class flare that burst out from an active region on the sun on November 3, 2011.
Photo Credit: NASA/SDO

Future missions, like Solar Orbiter and Solar Probe Plus, will take us closer to the sun than ever before. Solar Orbiter, a mission led by the European Space Agency with strong NASA participation, will launch in 2017, making it possible to study the sun with a full suite of in-situ instruments (to detect particles and conditions near the spacecraft) and remote-sensing instruments (to observe the sun itself) for the first time from as close as 0.28 Astronomical Units, or about 23,000,000 miles, and will provide imaging and spectral observations of the suns polar regions from out of the ecliptic—the plane of Earth’s orbit around the sun. Solar Probe Plus will fly into the corona, gathering data on the processes that heat this layer of the atmosphere and accelerate the solar wind.

Solar and space-weather missions aside, NASA is also home to advanced data centers and the Community Coordinated Modeling Center (CCMC). The CCMC provides a mechanism to validate, test, and improve research models for eventual use in space-weather forecasting.

The sun continues to keep solar physicists very busy. The questions we are still struggling to answer are many. For instance, in the not-too-distant future, we hope to uncover the source of the solar activity cycle; how magnetic energy is created, stored, and released from the sun; and how solar wind is accelerated, to name just a few. Our capacity to observe the sun more and more closely should help us find the answers.

Holly R. Gilbert is chief of the Solar Physics Laboratory at Goddard Space Flight Center. She has more than fourteen years of experience in solar physics research, with an emphasis on the physics of the solar corona and chromosphere, including prominences and other phenomena associated with coronal mass ejections.