Back to Top
Home/ASK the Academy/Volume 5/5.1/This Month in NASA History: Apollo 1 – Abandon in Place 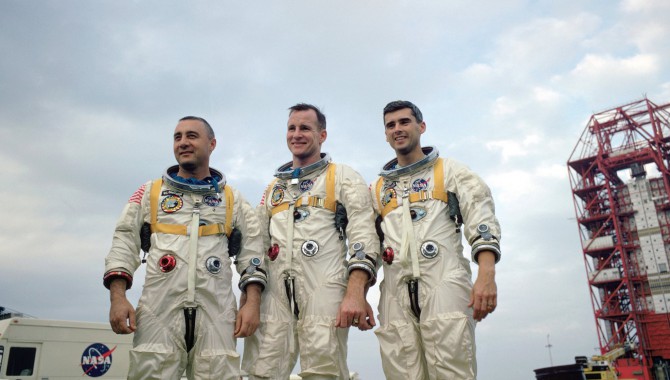 The prime crew of Apollo 1, Virgil I "Gus" Grissom, Edward H. White, II, and Roger B. Chaffee, during training in Florida. Credit: NASA

Forty-five years ago this month, a cry let out from the Apollo 1 capsule, “There’s a fire in here.”

January 27, 1967, Gus Grissom, Ed White, and Roger Chaffee sat side by side in full gear inside the Apollo 1 capsule on the launch pad at Complex 34 at Kennedy Space Center. This would serve as the first flight with astronauts in the capsule. As the crew performed a final prelaunch test after several hours of work, the pure oxygen environment inside the capsule ignited at 6:31 p.m., taking the lives of all three astronauts.

The fire lasted less than twenty-six seconds, consuming all of the oxygen in the capsule. Five minutes passed before the ground crew could open up the hatch to the inside. It was too late.

Following the fire, NASA convened an eight-member Apollo 204 Review Board to investigate and understand the accident. The report found that a short circuit in the electrical system ignited combustible materials fed by the 100 percent oxygen atmosphere. The Mercury and Gemini programs had both flown with 100 percent oxygen environments, the report said, leading “…to a false sense of confidence and therefore complacency in this operation.”

“No single person bears all of the responsibility for the Apollo 204 accident,” the report read. “It happened because many people made the mistake of failing to recognize a hazardous situation.”

While the test was originally called Apollo-Saturn 204, the widows of the astronauts requested that it be remembered as Apollo 1. The Apollo program was on hold until the Apollo capsule could be redesigned. The program returned to flight status in October 1968 with Apollo 7.

Read an excerpt from Chariots of Apollo about the fire.

The prime crew of Apollo 1, Virgil I “Gus” Grissom, Edward H. White, II, and Roger B. Chaffee, during training in Florida.