Back to Top
Home/47/ASK Magazine/Sinking the Unsinkable: Lessons for Leadership 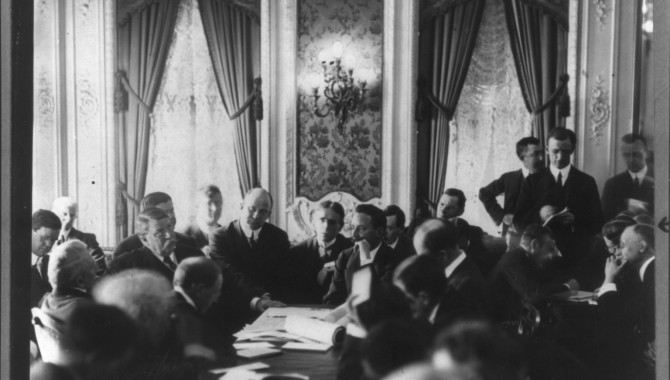 ” … my purpose is to ascertain what lessons this disaster teaches us … ” —Senator I. Raynor, May 28, 1912, during the U.S. Senate Inquiry on Titanic Disaster

On April 15, 1912, the “unsinkable” RMS Titanic sank during its maiden voyage only 2 hours and 40 minutes after hitting an iceberg. 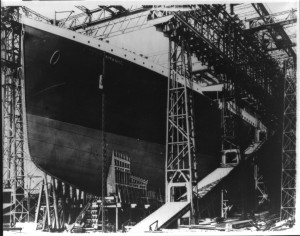 Investigations and inquiries led by the U.S. Senate and the British Wreck Commission indicated that a combination of overconfidence, ignored warnings, lack of communication, and lack of leadership resulted in one of the greatest disasters in maritime history.

On April 10, 1912, when she steamed out of the harbor at Southampton, England, on her maiden voyage, the Titanic was the largest moving object ever built by man. The product of five years of planning and construction, Titanic was compared to the greatest monuments of the world. Proclaimed by a leading naval engineering journal as “practically unsinkable,” she sank during her maiden voyage, taking with her the lives of 1,517 people.

What happened? The Titanic disaster hearings and related sources offer some lessons to today’s project leaders and teams.

Compliance Is Necessary but Not Sufficient

Titanic‘s original project plan included a configuration of forty-eight lifeboats, sufficient to accommodate all her passengers and crew. The original plans, however, were not approved by J. Bruce Ismay, chairman of White Star Line. Ismay’s arguments were based on the fact that Titanic could be in full compliance with the British Board of Trade rules with just twenty lifeboats, enough for 1,176 passengers. He reasoned that the ship was designed to be practically unsinkable, a lifeboat in itself. Additional lifeboats would unnecessarily clutter the boat deck that could be used as a promenade area.

Titanic sailed on her maiden voyage in full compliance with legislation, with 2,223 passengers and crew on board, but with a total lifeboat capacity for just 1,176 passengers.

Sometimes Leaders Have to Rock the Boat

Titanic‘s original lifeboat plans were conceived by Alexander Carlisle, managing director of shipbuilder Harland & Wolff. He believed that new giant ocean liners needed a larger number of lifeboats than the number required by rules set by the British Board of Trade. He presented his plans during meetings held with White Star Line but did not press his views after the client refused to accept his plans, considering this to be a client decision. Later, during the British Wreck Commission’s inquiry, he said he regretted not being forceful enough with his client and peers in defense of his call for more lifeboats.

Near Misses and Mishaps Are Learning Opportunities

A trail of mishaps and near misses pointed to the challenges of controlling the hydrodynamic forces of the new class of ocean liners:

Near misses and mishaps are opportunities to learn and to take steps to make sure that similar problems will not happen in the future. However, instead of increasing awareness, they contributed to augmenting the level of confidence in the new class of ships in terms of maneuverability and endurance to collisions. According to author Leo Marriott, the fact that Olympic endured collisions with a warship and stayed afloat, with no casualties, despite serious flooding, appeared to vindicate the design of the Olympic-class liners and reinforcing their “unsinkable” reputation. 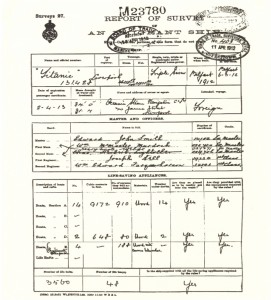 Report of Survey of an Emigrant Ship 04/11/1912.
The Board of Trade Survey Report shows Titanic in compliance with twenty lifeboats on her maiden voyage.
Photo Credit: The National Archives, Kew, Richmond, Surrey, UK

Captain Edward Smith, commander of Titanic, was the most experienced captain of White Star Line. Talking about his experience during a press interview in 1907, he declared: “… I have never been in an accident of any sort worth speaking about … nor was I ever in any predicament that threatened to end in disaster of any sort … I cannot imagine any condition which would cause a ship to founder … Modern shipbuilding has gone beyond that.”

It is important to note that according to White Star Line logs, Captain Smith’s experience prior to 1911 was based on ships no larger than 24,000 tons. Titanic and her sister Olympic, the largest ships ever constructed, were 45,000-ton ships.

Captain Smith’s assumption, based on his past successful experience, was that Titanic could establish visual contact with any iceberg in front of the ship in sufficient time to maneuver and avoid it. The report of the disaster hearings would find, among other conclusions:

… Titanic rushed onward on her true course, one recognized as appropriate … yet dangerous at this season of the year, when the Labrador current may be bearing vast masses of ice across the track of ships … Ice positions so definitely reported to the Titanic just preceding the accident located ice on both sides of the track or lane which the Titanic was following … No general discussion took place among the officers; no conference was called to consider these warnings; no heed was given to them. The speed was not relaxed, the lookout was not increased, … [Smith’s] indifference to danger when other and less pretentious vessels doubled their lookout or stopped their engines … was one of the direct and contributing causes of this unnecessary tragedy … Overconfidence seems to have dulled faculties usually so alert.

Watch Out for Organizational Silos

Organizational silos—bureaucratic or cultural barriers between departments or groups—decrease incentives to collaborate, share information, or team up to pursue common objectives. 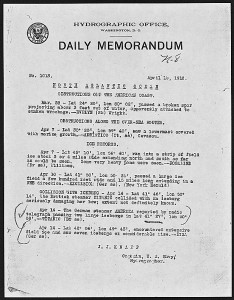 Daily Memorandum from the Hydrographic Office Reporting Titanic Disaster, 04/15/1912. The Hydrographic Office memorandum that registered on April 14 Titanic’s transmission of an iceberg message from SS Amerika reporting two large icebergs, and Titanic’s collision with an iceberg in the same area she reported.
Photo Credit: The U.S. National Archives and Records Administration

The winter of 1912 was the mildest winter in thirty years, resulting in the creation of an enormously large crop of icebergs from the Greenland glaciers. Unusual winds blew these bergs far southward, crossing established ship routes. Accordingly, on January 16, 1912, the Hydrographic Office in Washington, D.C., sent a circular letter to shipmasters, requesting them to make use of the United States naval radio stations for the purpose of reporting to the Hydrographic Office ice or other dangers to navigation, using the telegraph as a navigational aid in addition to traditional lookouts.

White Star Line had a partnership with Marconi Wireless Telegraph Company, but Marconi telegraph operators were not considered part of the crew; they were employed by the Marconi Company, not by White Star Line. They had their own cleargoals and priorities, namely to send and receive commercial paid messages for passengers. There was little established coordination or procedure, and no incentives for the radio room and the bridge to handle ice warnings cooperatively.

The disaster hearings also discovered that an important ice-warning message was received approximately one hour before the accident. The SS Californian, on the same route of the Titanic, stopped due to ice and tried to warn Titanic. To this the operator of the Titanic replied, “Shut up. I am busy. I am working Cape Race.” He was focused on his work, that is, sending and receiving passengers’ paid messages.

Ineffective coordination, procedures, and communication between organizations that should have worked together were contributing factors in blocking essential information that could help to prevent the disaster.

Listen to All Levels of the Organization

No job in an organization is too small to help break the sequence of events that create a crisis. Research indicates that 90 percent of employees can perceive far in advance when projects are doomed; 71 percent say that they try to speak up about their concerns to key decision makers but do not feel they are heard; and 19 percent don’t even attempt to speak. 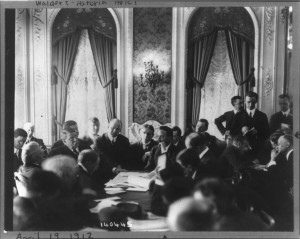 In the case of the Titanic, the disaster hearings reports and other sources indicate that lookouts who could have prevented the disaster did not have the tools or status needed to ensure their concerns would be acted on. According to the Boston Sunday Globe of April 21, 1912, and researcher George Behe, past vice-president of the Titanic Historical Society, lookout Frederick Fleet tried to warn the bridge about the apparent presence of icebergs before the fatal iceberg hit the ship. He was not heard because, due to weather conditions, he was unsure and could not confirm his sighting as an iceberg. The bridge did not take appropriate action because they needed confirmed iceberg sightings to change course or reduce speed. The lookouts had no binoculars, however, which made confirmation difficult. The binoculars in the crow’s nest were locked; nobody knew binoculars to the lookouts. (The key to access the binoculars was later found and auctioned in the United Kingdom in 2007 for 90,000.) Finally, at 11:40 p.m., lookout Frederick Fleet confirmed sighting an iceberg, but it was too late. Titanic would hit the iceberg 37 seconds later.

During the hearings, the lookout said in his testimony that ” … if he had been supplied with binoculars, which were denied him by officers, he could have seen earlier the iceberg with which Titanic collided soon enough to get out of the way ….” Almost one hundred years later, computer simulations proved that, had Titanic lookouts seen the iceberg a few seconds earlier, the disasters could have been avoided.

Build and Train Your Team Across Project Phases and Functions

The Titanic‘s officers and crew were not trained as a team in the handling of lifeboats, nor were they aware of lifeboat tests done during the construction phase. Their lack of knowledge, training, and shared experience made the lifeboat situation even worse.

According to the disaster hearing reports:

“Officers and crew were strangers to one another … When the crisis came there was a state of absolute unpreparedness … Titanic‘s crew had never acted as a team to lower the ship’s boats … Untrained and untried, and … unfamiliar with the lifeboats’ capacity … [they failed] to utilize lifeboats to their capacity … [resulting] in the needless sacrifice of several hundred lives which might otherwise have been saved.” 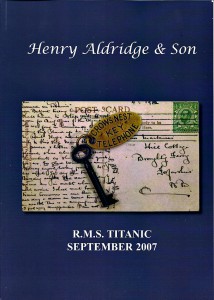 As a consequence of the Titanic disaster, the International Convention for the Safety of Life at Sea was created to apply lessons learned from the tragedy. The many factors leading to the sinking of the Titanic clearly demonstrate that crises do not just happen, they are created by a chain of events and conditions that can potentially be recognized and responded to before the damage is done. Learning from crises is important, but it is too expensive when the cost is measured in human lives as well as money. That unacceptably high cost makes it even more important to use the lessons of past disasters to avoid future ones.

In addition, we need to start learning before crises happen by investing in learning skills, processes, tools, and new thinking models for teams and for leaders at all levels in the early identification and prevention of crises. In the centenary year of the loss of the Titanic, we should remember that crisis prevention is possible but depends on leadership, alertness, cooperation, and communication at all levels of the organization.

Pedro C. Ribeiro is the founder of Stratech/TheProjectOffice. A director of the Risk Management SIG and a former member of the board of PMI Educational Foundation, author of the book Licoes do Titanic sobre Riscos e Crises, and contributor to the PMI Practice Standard for Project Risk Management.