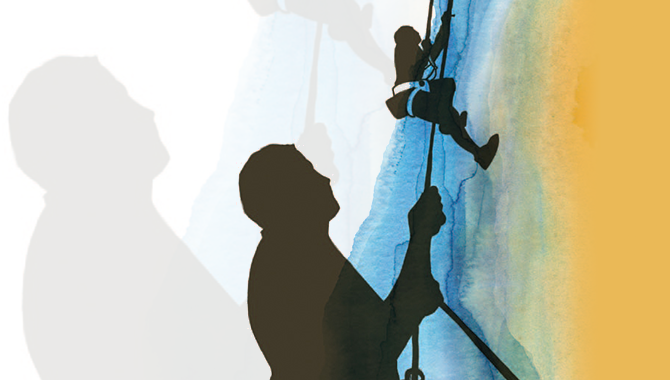 Mentoring has a long tradition at NASA. To explore how to get the most out of a mentor-protégé relationship, I spoke with several NASA veterans, including Chief Engineer Mike Ryschkewitsch and Liz Citrin, deputy associate director of the Joint Polar Satellite System program, with executive coach Diane Brennan and with a handful of their protégés. All have been both mentors and protégés. As Goddard Chief Engineer Steve Scott said, “NASA is really a learning organization and mentors are the key that unlocks the door.”

Mentoring at NASA takes various forms. Technical and management development programs, such as the Systems Engineering Leadership Development Program (SELDP), encourage mentoring as part of the program. Terry Nienaber’s supervisor, Pete Spidaliere (mission systems engineer for the Magnetospheric Multiscale mission), was also his formal SELDP mentor. The relationship was very close, as Spidaliere guided Nienaber, of Langley’s Mechanical Systems Branch, during the transition to a new role, a new project, and an unfamiliar NASA center Goddard for the yearlong program. Nienaber recounts that Spidaliere even gave him a “good-natured shove into paying more attention to my health, nearly dragging me to the gym.” But formal programs account for only a portion of mentoring. Much, perhaps most, mentoring at NASA is an informal match-up between a protégé and a manager or expert.

Mentoring spans three dimensions of work at NASA: technical, managerial, and career. All the mentors I spoke with understand that mentoring is a whole-person activity. Whatever their specific focus, mentor and protégé discussions touched all three dimensions. So when you are choosing or working with a mentor, consider the implications for technical, managerial, and career issues.

Given NASA’s wide diversity of disciplines, capabilities, centers, and personnel, you’ll need to develop a work style that can accommodate differences and build collaboration. Citrin had a protégé who thought his position gave him the authority to do what he wanted. She guided him to a more inclusive and collaborative work style.

To develop this combination of very different skills, NASA staff frequently have numerous mentors during their career, and sometimes two or three at once, each focusing on different aspects of skill building and career development.

You can take the initiative to find a mentor. Ask your supervisor, current or previous mentors, managers, or colleagues who have experience in the kind of challenges you are facing. Nienaber said he looks for “people that impress me with how they handle things in which I’m weak.”

This is simple but important and easy to forget. Find mentors who either address your weak spots or deepen a strength, and focus the discussion on those cutting edges. In the NASA environment, depth and breadth are both critical to develop technical and managerial expertise. As your relationship evolves, keep an eye on your intent, shift it as appropriate, but don’t just let the conversations drift.

As in any relationship, mentor and protégé need to click. There is no reason to believe that someone with the right technical skills will be the right mentor for you. Citrin pointed out that many different personal or management styles work in NASA. You don’t need to and may not be able to change your core management style. So find a mentor who can give you good, frank feedback but still work with you as you are, rather than try to turn you into someone else. As you discuss your intent, listen for how they can help you. If their advice isn’t helpful, you’re free to end the relationship without any negative reflection on you or the mentor.

Getting a new mentor does not mean you need to end current mentor relationships. Despite the fact that Goddard’s Richard Barney has had numerous technical and management mentors during his career, he still turns to Tom Magner, the mentor he was assigned on his first day more than thirty years ago. At a given time, you may have several mentor relationships.

Bring questions to discuss, manage your meeting time, ask to shadow your mentor to meetings, draw insights from your mentor, and follow up. One of Felicia Jones-Selden’s protégés e-mails her topics the day before a meeting and Jones-Selden, deputy director of the Applied Engineering and Technology Directorate, routinely brings protégés to meetings so they can talk about the issues afterward. Taking the lead makes the mentor-protégé relationship more of a partnership. As she notes, it should bring out the best in both of you. Brennan notes, “Mentors are people we respect and aspire to emulate. This can create feelings of intimidation and fear. It’s important to recognize this dynamic and to shift it to a mind-set of curiosity and learning.”

Make It Easy for the Mentor

Mentors, like everyone else at NASA, have more to do than they can fit into the day. It’s tempting to meet in the mentor’s office, but that often means disruptions that make deep discussion impossible. Find a time and place that are conducive to open dialogue and the least disruptive for your mentor; morning coffee, lunch, and Friday afternoon are likely possibilities. Since Jones-Selden has several protégés, she routinely establishes regular monthly lunch mentoring sessions.

When following up on complex subjects, Nienaber prefers “walk-arounds” rather than writing an e-mail because it increases opportunities for deeper discussions. Additionally, when he sees someone handle an issue particularly effectively, he talks with them afterward about what they were considering during a potentially difficult conversation.

Project demands can easily supersede mentoring meetings. But wide gaps between meetings will kill momentum and the depth of connection. Brennan notes that making time for mentoring meetings is a challenge and needs to be a priority. One of her protégés likened the experience to taking your car in for a tune-up. “It’s an hour ‘time-out’ where you get to be open, honest, and unguarded; to think strategically, consider questions, listen, learn, and re-energize.”

Learning with Your Mentor

Start by discussing your intent and expectations. Barney said, “You have to have some hutzpah in asking your mentor what he or she wants to get out of the relationship.” Scott feels that meeting in his division chief’s office makes it too formal, so he takes his mentor to Starbucks where they can talk more as equals. When Nienaber asked Ryschkewitsch to be his mentor, Ryschkewitsch set a condition: “Only if you coach me, too. You have to give me feedback on at least one thing you think I could do better.” Making the mentoring relationship two-way shifts the power structure of the relationship to a more collaborative one.

Focus on How You Think

Expertise is a combination of knowledge and thinking skills–skill in diagnosing issues, understanding their causes, and making difficult judgment calls. One of Ryschkewitsch’s mentors taught him the skill of thinking down a path when diagnosing and understanding technical problems and recognizing when to shift paths. Now he passes on that lesson by teaching his protégés this skill of thinking down multiple paths.

Practice Thinking with Your Mentor

You can only develop a skill through practice. We understand the importance of practice in the arts and sports. Pianists learn by playing for their teacher; the teacher guides and directs them based on hearing them play. Developing good thinking skills is much the same. When Nienaber turned to Rosemary Baize at Langley to help with a difficult career decision, she asked probing questions that helped him sort out emotions, facts, and outcomes rather than giving him suggestions. By helping him shift the way he thought about the decision, she steered him away from some poor choices.

Ask Your Mentor to Help You Think

Don’t ask your mentor what to do. Instead think aloud, as Nienaber did, about a judgment call and ask your mentor to question and guide you with questions like, “What am I missing? What considerations should I have? Help me understand the science or principles that are working here.’’ Then ask your mentor to guide you in making a decision in the same questioning way. Your mentor is likely to ask you about the options, the assumptions you are making about them, if they really address the issue, the science behind them, potential consequences, or other dramatically different approaches to the resolution. Sometimes it may feel that your mentor is driving you down unnecessary routes, but remember: the purpose of the discussion is not to solve the problem but expand your thinking.

Explore How Your Mentor Thinks

Sometimes it may feel that your mentor is driving you down unnecessary routes, but remember, the purpose of the discussion is not to solve the problem but expand your thinking.

Pay attention to where your mentor directs you, the hidden clues he or she uses to correctly diagnose the situation; her analysis of the assumptions you are making; the science, research, or principles he draws on to understand the situation; the issues he or she is concerned about as you consider right courses of action together. Paying attention to how your mentor thinks as you discuss a technical, managerial, or career issue is a great way to learn. Because you are discussing a real issue that matters to you, the relevance, depth, and consequences of your mentor’s attention and concerns will have much more impact than if you simply hear a story about one of his or her projects.

Being a good protégé will make you a better mentor and vice versa. Protégés often think they should get the “right answer” from their mentor, but if you learn to explore your own and your mentor’s thinking openly, you’ll develop the skills you need to guide protégés when you start mentoring yourself.

The NASA staff I interviewed said their mentors’ guidance was critical to their success. Hopefully these tips will help you carry on that success. As Ryschkewitsch said, “Mentoring is more than just helping the individual. It is bringing up the next generation.”

Richard McDermott , president of McDermott Contracting, is an author and consultant on designing knowledge organizations, transferring expertise, and building communities of practice. His forthcoming book, How to Think Like an Expert, is scheduled to be published by Harvard Business Press.