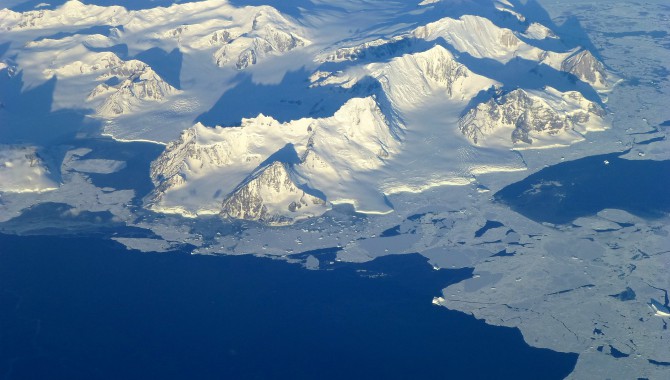 View of the northern Antarctic Peninsula from high altitude during IceBridge's flight back from the Foundation IceStream. Photo Credit: NASA/Maria-Jose Vinas

Success in science often relies as much on planning, communication, and constant improvement as it does on gathering data, writing papers, and giving lectures. This is especially true for large scientific missions like NASA’s Operation IceBridge. To ensure the mission meets its goals, shares knowledge, and fosters communication, IceBridge conducts science team meetings twice a year, most recently in January 2013, when scientists and engineers met at Goddard Space Flight Center. The knowledge shared at these meetings helps shape IceBridge’s scientific aims and improves efficiency. 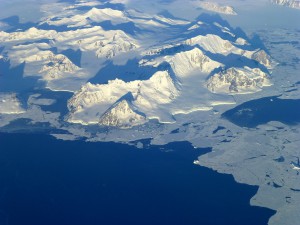 View of the northern Antarctic Peninsula from high altitude during IceBridge’s flight back from the Foundation Ice Stream.
Photo Credit: NASA/Maria-Jose Vinas

Operation IceBridge started in 2009 when NASA’s Ice, Cloud, and Land Elevation Satellite (ICESat) stopped collecting data. With ICESat-2, NASA’s replacement for ICESat, still years away from launch, there was an urgent need to fill this observation gap at a time when ice in the Arctic and Antarctic was showing signs of dramatic change related to the warming environment. IceBridge started as a way to maintain a continuous data record between the two satellite missions. Since it began in 2009, IceBridge has been gathering detailed information on many aspects of polar ice to improve understanding of how the Arctic and Antarctic are changing and how these regions interact with the global climate system.

Like many NASA missions, IceBridge relies on a team of expert scientists to guide the project in the form of Level 1 science requirements—the mission’s essential aims. These requirements and other guidance from the science team determine what IceBridge will study. 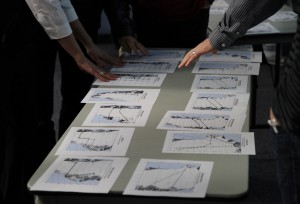 Science team members are selected for a three-year term through an open process. Candidate proposals are assessed at NASA Headquarters and the winners are chosen based on the strengths of the proposals and the particular expertise of the scientists who submit them. “NASA did the IceBridge project a great service by giving us diversity in the expertise and perspectives of the science team members,” said Jackie Richter-Menge, IceBridge science team co-lead and researcher with the U.S. Army Cold Regions Research and Engineering Laboratory in Hanover, NH.

At the end of each three-year term, a new call for proposals goes out. “This allows members of the science community to actively participate and engage in IceBridge,” said Michael Studinger, Operation IceBridge’s project scientist, based at Goddard. “Open competition every three years is a mechanism to make sure the project is supported by the best ideas from the science community.”

Because IceBridge studies many aspects of polar ice, its science team requires a wide range of expertise. One group studies sea ice and one looks at land ice. The land-ice group, led by Ken Jezek, a scientist at the Byrd Polar Research Center at Ohio State University, concerns itself with the Greenland and Antarctic ice sheets, Canadian ice caps, and various glaciers. Richter-Menge leads the sea-ice group, which focuses on sea ice in the Arctic and Southern oceans. The specialized groups also work with each other and the IceBridge project science office on matters related to the overall mission plan during coordinated sessions at the meetings.

Meeting of the Minds 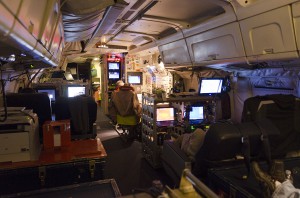 Members of the science team work together continually through e-mail and telephone, but their twice-yearly team meetings have the most impact. During these sessions the science team meets with mission representatives and scientists using IceBridge data, reviews mission goals, and works on plans for the upcoming IceBridge campaign.

Campaign planning is a vital part of the science team meetings, but the presentations on research are probably just as important. Listening to researchers at the meetings led to surveys of the Beaufort and Chukchi seas, collaborative activities such as IceBridge’s work with the European Space Agency’s CryoSat verification campaign, and the quick-look sea-ice data product that rose from a need to get data for seasonal predictions more quickly. “Meetings are a big part of knowing what the community is doing and how IceBridge figures into the picture,” said Richter-Menge.

In addition to bringing forth new ideas, listening to the polar science community gives the IceBridge science team a way to learn how the mission can improve what it does. The influence of this process can be seen in the differences between Arctic flight lines in 2011 and 2012. Sea-ice cover in the Beaufort and Chukchi sea regions north of Alaska are seeing big changes and there is growing interest in commercial activity. Community feedback highlighted the shortage of good information on sea ice there, motivating the team to consider more flights in this region. “The big jump in coverage came from the sea-ice team listening to the community,” said Richter-Menge. 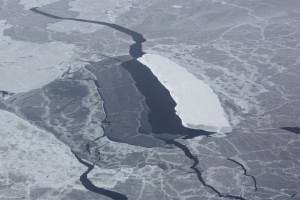 Iceberg embedded in sea ice. This opening was likely caused by winds blowing against the side of the iceberg.
Photo Credit: NASA/George Hale

One of the most important and visible tasks of the science team meetings has to be the selection of campaign flight lines. This process involves looking at the needs of many different scientists and then prioritizing which flights will meet which needs while working within the mission’s budget and time constraints. The requests are vetted by the science team and then turned into potential flight lines that are discussed at the meeting. During these discussions the science team decides which flights meet the most needs, starting with those laid out in the Level 1 science requirements. Scientists work to balance trade-offs—for example, compromising on repeat flights in order to expand coverage area. Through this process of give and take, the team reaches a consensus on which flights best meet the mission’s overall goals. Prioritizing the next campaign’s surveys is one of the main highlights of IceBridge science team meetings. “One of our primary roles is to make recommendations on flight lines,” said Richter-Menge.

This selection procedure has been improving over the past year in a manner reflecting an overall move toward process improvement with the IceBridge science team and project science office. In the past, scientists would send e-mails to various people in the science team or project science office. “You might have to search through e-mails from twenty or thirty people to put together one mission,” said John Sonntag, Airborne Topographic Mapper senior scientist and IceBridge mission planner.

Open competition every three years is a mechanism to make sure the project is supported by the best ideas from the science community.

“We needed a unified way to manage requirements,” said Christy Hansen, IceBridge project manager. “So we created a spreadsheet for them to fill out.” The 2012 Antarctic campaign was the first use of this new process, which turned out to be a success. This sort of improvement is at the heart of the interaction between the science team and project science office. “We ask the team what problems they had in the past and work to make things more efficient,” Hansen said.

If the science team’s job is to make recommendations for the mission, then the IceBridge project science office’s job is to turn them into reality. As project scientist, Studinger handles details such as how to implement Level 1 science requirements. Hansen manages the overall logistical and planning aspects of the mission, ensuring the mission is meeting requirements and following process. One of the biggest parts of this task is keeping the lines of communication open. “We don’t want people feeling like they’re left out of the loop,” said Hansen. 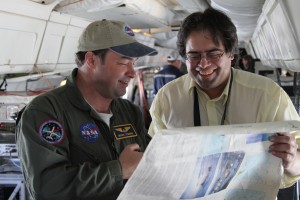 Two new tools for keeping these lines open are IceBridge’s science web site and mission tools suite. The mission tools suite is a portal where the various members of the IceBridge team share documents, track the mission’s milestones on a shared calendar, and communicate with each other via an online message board. The science web site serves as a one-stop shop for the science team, project science office and instrument teams, and researchers in the polar science community, containing updated Level 1 science requirements, lists of publications, and links to IceBridge data. In the future, it will include tools and computer code for working with that data. These tools and the continual interaction with the science team, instrument teams, and groups like the National Science Foundation and NASA Headquarters are all about making the mission as efficient and successful as possible.

Not all of IceBridge’s improvements rely on high technology. To streamline the sometimes time-consuming process of prioritizing flight lines, one science team member came up with the idea to use printouts of proposed flights. “I had a feeling that people were having trouble visualizing the whole scheme,” said Robin Bell, scientist at the Lamont-Doherty Earth Observatory at Columbia University. By sorting the printouts into low-, medium-, and high-priority groups, the science team was able to reach a decision on flight lines and walk away with a better sense of the mission’s goals.

In addition to planning for the next IceBridge campaign, the science team is also looking further ahead. Part of this is coordinating collaborative efforts for next year’s campaigns. “We’re looking down the road and fostering cooperation,” said Richter-Menge. A couple of the opportunities currently being explored include coordinating with research planned by Germany’s Alfred Wegener Institute later in 2013 and a new season of European Space Agency CryoSat verification work slated for 2014.

The IceBridge science team is also working on the coming transition to ICESat-2. The satellite, scheduled for launch in 2016, will carry a laser altimeter at a far higher altitude than IceBridge. To ensure a smooth transition, the team is collaborating with researchers using the land, vegetation, and ice sensor (LVIS), a laser altimeter instrument. “We’re working with the LVIS team on collection of high-altitude data,” said Richter-Menge.

Before the Arctic campaign ends in May, IceBridge will start working on goals for the Antarctic flights coming up later in the year and—using the mission’s newly honed processes and tools—will prepare for the science team meeting taking place this summer. 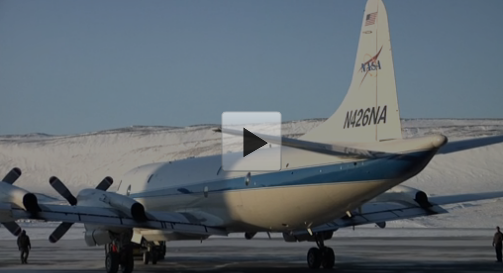