Back to Top
Home/ASK Magazine/50/Spaceport Innovators: Knowledge Sharing as the Gateway to Innovation 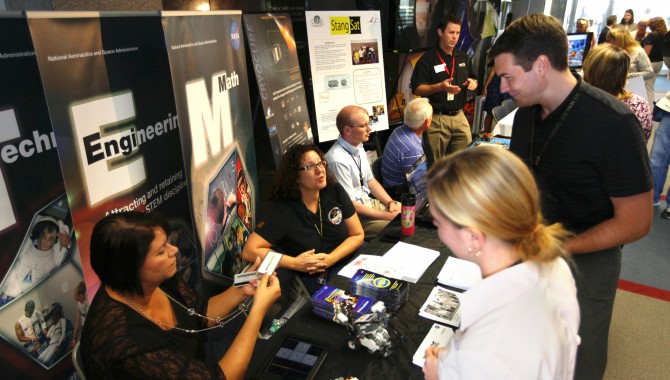 Employees showed off some of their ideas and toured Kennedy Space Center's unique labs and facilities during the center's first Innovation Expo.Photo Credit: NASA

In 1980 3M brought one of the most famous products in the company’s history to market. The Post-it note became a breakout success and is today a staple of the modern office. How it made it to market is a classic story in the history of American innovation. The key component of the Post-it was the weak adhesive that allowed it to stick but also be easily removed. When this weak adhesive was first developed in 1968, no one could find a use for it. In search of a use, its inventor presented the glue at formal and informal knowledge-sharing events at 3M over the course of several years. In 1974, Art Fry happened to hear about the glue at one of these knowledge-sharing seminars. During his church’s Sunday service later that week, Fry was frustrated when the small paper strip bookmarks in his hymnbook kept falling out. At that moment he saw the potential of the weak adhesive. It could be used as a way to keep his little bookmarks in place! The Post-it was born. 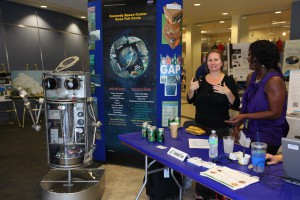 A robot built by Florida Robotics served as the centerpiece of the exhibit by Kennedy’s Environmental Management Branch.
Photo Credit: NASA/Kim Shifflet

The key event in the birth of the Post-it was not the invention of the adhesive or even Fry’s eureka moment. It was the seminar where the key technology was shared. Knowledge sharing is an essential component in the process of innovation. When we look back at the history of great innovations, we nearly always find that innovations do not come from a lone genius locked away from the world. Instead, they come from people who find ways to connect with other people and their different ideas. These people are able to take concepts, often in disparate fields, and combine them to form a new idea that is better than its individual parts. Google the history of the ice cream cone, the airplane, the cell phone, Velcro, the moving assembly line, and, of course, the Post-it, and you will find that all those innovations were created as a result of melding ideas from different sources.

At NASA, innovation has always been a part of our jobs. As we transform ourselves for a new era of space exploration, we need to continue to find new and exciting ways to collaborate and innovate. To that end, with support from our center’s engineering and technology leadership, we started an employee group at Kennedy Space Center a few years ago that tries to foster innovation at our center and ingrain it in our culture. We called ourselves the Spaceport Innovators and opened our membership to everyone on center. 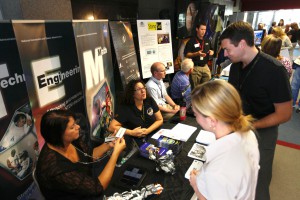 Employees showed off some of their ideas and toured Kennedy Space Center’s unique labs and facilities during the center’s first Innovation Expo. Photo Credit: NASA

Over time, we have grown from a small group of about twenty to a membership of more than two hundred people with an average meeting attendance of over thirty. Among our ranks are civil servants and contractors from nearly every directorate at every level. The group meets every other week and is a venue for employees to share their knowledge. That knowledge can vary from innovation success stories like Johnson Space Center’s Project Morpheus and Langley Research Center’s Max Launch Abort System, technology demonstrations like the Harris Corporation Force Feedback Robotic System, exciting research projects like the Trash to Supply Gas project, interesting books like What Would Google Do?, and even far-reaching topics like colonizing the solar system in fifty years via robotics utilizing space resources. Sometimes our speakers from outside Kennedy happen to be visiting the center for other reasons, as was the case with the Launch Abort System talk; sometimes they present via telecom/webcam, as our Morpheus speaker did.

Our meetings are normally an hour long and usually focus on a single topic via a presentation followed by a question-and-answer session. A casual observer may think that the highest value of these meetings occurs when the speaker is talking, but I think the golden moments are when the audience asks questions, because that’s when the knowledge sharer and the knowledge receiver interact. That’s when two minds work together and the sparks of innovation occur. You know a particular meeting has been successful when people linger after it has ended and talk one to one. These are the moments when the knowledge shared and casual questions can lead to something much bigger. 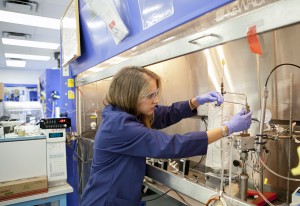 Spaceport Innovators often include knowledge from innovation success stories like the Trash to Supply Gas project, shown here with Chemist Anne Caraccio working on a prototype reactor for incinerating trash in space. She is part of the team developing a mechanism to burn trash and extract valuable gases from the material.
Photo Credit: NASA/Dmitri Gerondidakis

Over time, it was only natural that our members would look for ways to collaborate outside the meetings. Now, in addition to the biweekly meetings, members of Spaceport Innovators form small teams to work on projects that are of interest to the mission of the group: “To foster innovation and lead change through collaboration, communication, and knowledge sharing. Spaceport Innovators will serve as an incubator for innovative ideas and help launch them toward success.” Some of the projects we have worked on include creating innovation and creativity spaces on center, coordinating our center’s participation in the International Space Apps Challenge, and organizing Kennedy’s first Innovation Expo.

The Innovation Expo, held on September 6, 2012, has been our biggest project yet. In many ways, the Expo was Spaceport Innovators on a much larger scale. It included exhibits by every directorate on center, tours of Kennedy’s labs and facilities, networking activities, an innovative project-funding competition, and short talks by NASA innovators and diverse outsiders including the U.S. Navy, Publix supermarkets, and Universal Orlando theme park. (You can find videos of the talks at https://www.youtube.com/playlist?list=PLStC43yAV6zRnhStfOTGfjFovf78M7qji.) Each component was an attempt to get the Kennedy community to connect in a different way. We located the activities in easily accessible parts of the center and placed the exhibits in the main building lobbies so employees had no choice but to participate.

A casual observer may think that the highest value of these meetings occurs when the speaker is talking, but I think the golden moments are when the audience asks questions, because that’s when the knowledge sharer and the knowledge receiver interact. That’s when two minds work together and the sparks of innovation occur.

This one-day Expo was knowledge sharing on a center-wide scale. Of course we encountered many of the challenges that these types of activities typically face. It can be difficult to separate people from their work and have them do something different. Although the overall event was successful, some of our activities struggled to reach our attendance expectations. In retrospect, that should not have come as a surprise. Participation mirrored what we see in our Spaceport Innovators meeting every month. Sometimes a topic will bring so many people that we can’t fit them in the room, but at other times so few people come that there are more presenters than audience. Unsurprisingly, most people will only attend when they think the topic has something to do with their work. Unfortunately, that narrow view of what is relevant will not make the workforce more innovative, since the biggest innovations come from listening to topics that we think have nothing at all to do with our day-today job. A true innovator is a person who has a deep expertise in a narrow discipline, but also has a wide breadth of knowledge. To be successful we must open up to new thoughts and ideas. 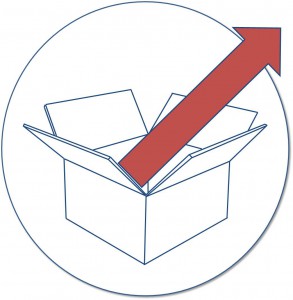 Given that fact, multidisciplinary teams are ideal for innovation. Our Spaceport Innovator teams strive to be as multidisciplinary as possible. Our Innovation Expo team was made up of people from directorates including engineering, finance, information technology, education, public affairs, human resources, and safety, and included both civil servants and contractors. Each of us brought different perspectives and ways of doing things, but we were still able to come together and organize this event in just two months. As we progressed, we were guided by the principles of transparency, diversity, collaboration, accountability, risk acceptance, and team empowerment. Each principle was key to making this event as successful and as innovative as we could. It allowed ideas to intermingle and flow freely without fear of failure.

One great example of our diversity leading us to a great solution was how we found many of our speakers. When we initially brainstormed ideas for speakers, we came up with many of the usual suspects, and frankly weren’t being very creative or innovative. Luckily, one member of the team was involved with Couchsurfing.org, which finds accommodations in people’s homes and apartments, during his college years. He had met some interesting people in his travels. He was able to tap into his couch-surfing network and find exactly the kind of out-of-the-box people we needed. His unique experiences led to a great benefit for the event, bringing in speakers including Carol Sugars, who spoke about the world’s first biofuel-powered jet, and Adam Nehr of Earthrise Space Inc., on the relationship between risk taking and innovation.

The survival of many organizations depends on innovation, and no organization’s future is more tied to innovation than NASA’s. We are now entering a period of great change not only in how we operate but also in what we do. How we reshape our culture today will have a lasting effect for decades to come. As we move forward we must understand that the very foundation of innovation is knowledge sharing. As an organization we must encourage as many communication opportunities as possible, and as individuals we must strive to expand our breadth of knowledge.

David J. Miranda is a NASA simulation engineer with the IT Computational Science Branch at Kennedy Space Center, where he supports discrete event simulation and design visualization work initiatives for center and agency projects. He also leads Kennedy’s Spaceport Innovators, who are dedicated to making Kennedy an even more creative and innovative place to work.