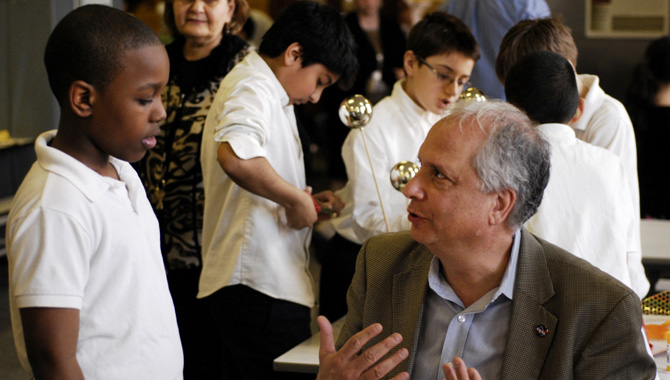 Dr. Ed Hoffman, NASA Chief Knowledge Officer, talks with P.S. 199 5th grader. This aspiring young student explains to Dr. Hoffman that he will one day soon be his boss and he will have to do what he asks him to do… he says, “I will be your boss one day.” – CITYarts Inc. copyright. Project produced and created by CITYarts with the professional advice of Lewis Peach.

I found out the hard way that some of the things you learn in school don’t hold up in the real world.

More than twenty-five years ago, I was a fresh-out working on team building and other forms of team support at Goddard. My professors at Columbia, where I earned a graduate degree in organizational psychology, emphasized the importance of “trusting the process”—letting people have their say when working with a group. The idea was that this kind of laissez faire approach would allow their concerns to come to the surface, would clear the air and help troubled teams heal and improve.

I was holding a two-day workshop with a Goddard team that had recently gotten a new young manager. The previous manager had generated a lot of ill-will among team members. Apparently, she had listened to the ideas of only a few preferred employees and insisted that the rest of the team just do as they were told. The new manager wanted to create a more participative environment and asked me to lead a team building session.

The first day of the meeting went well, with a lot of valuable information presented and discussed. The morning of the second day also went well. We broke for lunch.

One group came up to me after the break and said they had discussed big issues at lunch that they wanted to present to the team. Alarm bells went off in my head, whether because I had a sense of the kind of thing they would say or because I knew I would be giving up control of the meeting—maybe both things were true. But my professors had taught me to trust the process, so I did. I told them to go ahead.

For ten minutes, they talked about how much they had hated the previous manager. They attacked a current team member in the room, who, they said, had been a stool pigeon, reporting them to the hated manager. “We didn’t like you,” they said.

By the time I closed down the discussion, the damage had been done. The criticized team member felt understandably hurt. A day-and-a-half of positive discussion had turned negative.

We got through the rest of the session and maybe regained some of the ground we had lost, but not all. The individual who had been attacked retired six months later.

I admitted to the new manager that I hadn’t handled the situation well. She agreed and said we could have developed a strategy to deal with the strong negative feelings if we had known what was coming.

Team-building workshops are not therapy sessions and I am not a trained therapist. That realization helped me years later, when I was asked to work with a very troubled team. I interviewed team members who had been genuinely traumatized by a toxic manager. When I went to him and said, “This is the most painful group I’ve ever seen,” he smiled. I asked why. He told me, “I’m glad they fear me. That’s good management.” I went to leadership and suggested they ask him to step down as manager. There was not much else I could to help such a damaged team. They asked me to keep working with them, but I knew it wouldn’t be possible to make headway on strategy and performance when the team was so deeply troubled.

So that early painful experience taught me a couple of important truths: that academic theory doesn’t always hold up in practice; and that my job was to keep groups moving toward their goals, dealing with problems without personalizing them.

I’ve applied the lessons to my work with teams for two-and-a-half decades. One manager articulated an important reason for the success of a lot of those efforts: “You listen to everyone, and we feel safe.”