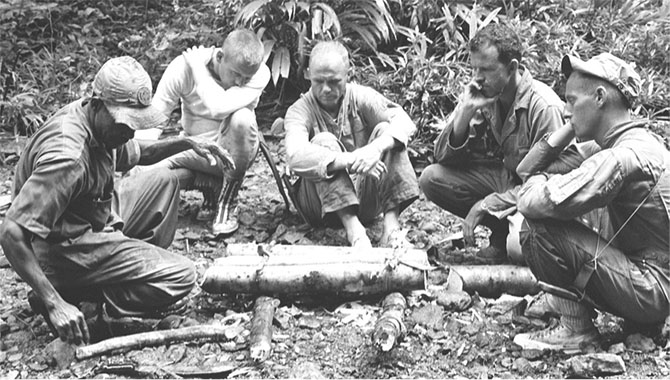 Astronauts participate in tropical survival training at Albrook Air Force Base near the Panama Canal. From left to right are an unidentified trainer, Neil Armstrong, John H. Glenn, Jr., L. Gordon Cooper, and Pete Conrad. Survival training was, and still is, an important exercise for astronauts, as a launch abort or misguided reentry could potentially land them in a remote wilderness area.

Luckily, it was a lesson learned during an exercise.

We had lots of different kinds of PMI training, most of which might be familiar to beginning project managers, but one exercise in particular really stuck with me, even to this day. We were seated at round tables, which held eight or ten PMIs. We were given a hypothetical scenario in which we were stranded on an ice floe in the frigid Arctic and provided with a list of say 20 items. Our task, as individuals, was to select the top 10 items we’d need to survive. For example, would a pocket star guide to establish position or waterproof matches to light a fire be more valuable? Would a phone or wood be more useful and what items in what combinations?

Anybody specifically experienced in extreme cold weather camping (or who had done the exercise before) was excused from participating. When each of us finished, we were instructed to turn our selection lists face down on the table.

Then we repeated the exercise in groups. The members of each table took some time to discuss the pros and cons of each item. Then we came to a group decision and filled out a single ballot per table.

We were given the correct answers as determined by wilderness experts and we scored our individual and group forms. In a large room with perhaps 20 tables, very few individuals had better scores than their groups did. I certainly didn’t.  I vaguely remember foolishly thinking a star guide would be more important than other fundamentals to stay dry and warm.

Many of us, myself especially, were surprised and brought down a peg or two. The point, of course, is that few individuals know more than the collective wisdom of their group. By talking things out, other members of my group were able to dissuade me from some of my erroneous ideas and convince me of the merits of some of their good ideas. This process of consensus building in small groups certainly helped the best ideas float to the top. Several years later, this process was validated again for me, when I had jury duty and was heartened by the way the discussion in the jury room proceeded.

I often remember this anecdote when I get frustrated with colleagues and need to remind myself to be patient and listen for other people’s good ideas. I like to think that everybody has something to contribute and that sometimes the trick is listening carefully enough to find that useful gem of information. In other words, there’s always somebody who knows more than I do about a given topic, especially in an organization such as NASA. The older I get, the more I appreciate other people’s maturity and honesty in acknowledging the limits of our own knowledge as individuals.

Stephen Garber is a historian in the NASA History Program Office.

Read more articles in the “My Best Mistake” series.