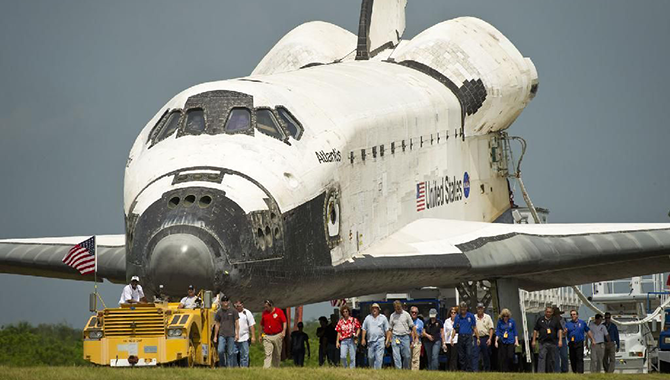 Workers at Kennedy Space Center in Florida accompany shuttle Atlantis as it is towed back to its processing hangar after landing at Kennedy's Shuttle Landing Facility, completing its 13-day mission to the International Space Station and the final flight of the Space Shuttle Program.

Anyone who has ever had the courage to go out into the world and do something knows there are only two kinds of mistakes: ones we can recover from and ones we cannot recover from.

Sometimes it’s not the mistake itself but where the mistake takes us that matters. Each mistake represents an opportunity for a course correction, if we embrace it.

Years before I came to NASA, I experienced the end of my first serious romantic relationship, and it drove me to run for three solid hours. That mistake—pushing my body further than it could go—resulted in a ruptured disk. Waiting for surgery in Gainesville with my sister, a pediatric oncology nurse, I read a book called Children’s Hospital. Seeing my interest in the book, my sister invited me to R.O.C.K Camp: Reaching Out to Cancer Kids.

The dozen summers I spent as a volunteer and then as the Associate Director of R.O.C.K. Camp were the life-changing positive result of my mistake. Those summers shaped my future life, including my time at NASA as a Human Factors Engineer and as a Thermal Protection System engineer.

Three of those summers were in Ireland at Barretstown, where I worked with sick children from fourteen European countries. I experienced different cultures through their children. Each culture had its unique and beautiful traits. Encountering that diversity helped me adapt to life at Kennedy Space Center, where, for instance, some groups are far more formal than others, and some more social and energetic.

Those summers taught me about communicating with no common spoken language, learning to see intent, and hearing what is not being said. One example was the night the Spanish and Russian kids wanted a dance party. Both groups brought music, but they had only one CD player. Their solution was beautiful: two songs of mosh-pit Russian metal music followed by two songs of suave Spanish music. At first, each group watched the other dance. Then both groups joining in. There were no translators that night, just young people with the common goal of solving a problem fairly. The benevolent intent was there, and the solution followed. That was also the secret of manned space flight—we all brought different things to the party and may have seen problems and solutions differently, but we all wanted the same thing.

During my time as a Human Factors Engineer, my young friends from camp affected by the Chernobyl nuclear meltdown had given me clarity and determination in our discussions about industrial accidents with the U.S. nuclear power community. When I was assigned the Project Manager role of NASA’s first Human Error based Process Failure Modes and Effects Analysis, the bridges that I had first built at camp between analytical thinking and human experience gave me greater ability to understand the subtleties required to complete this important work. Time at camp taught me the lesson of getting “self” out of the way while remaining willing to speak up; of staying focused on the task at hand but seeing the larger picture; of keeping the team cohesive; and of tirelessly working to understand and mitigate risk.

I learned how our actions can impact the lives of others. At camp, our primary goal was to get those children home safely and, after that, to see that they were fed, got some sleep, felt welcomed and loved, and had more fun than they may have known before or since. I felt a great sense of duty and responsibility toward those kids, as I and my colleagues did about our shuttle crews and work family. When we lost kids to cancer or crews to tragedy, a part of us went with them. Yet as my mom always said, “We kept on.”

So one simple mistake defined most of my adult life. I learned that making sure people are okay is at least as important as making sure systems are okay. When the people who make and maintain systems are okay, those systems function better. Risks are seen and addressed more quickly. People are more willing to admit, to see and to correct mistakes. Working with children, camp and medical personnel, as well as engineers, taught me the necessity and art of being human and connected in each moment.

Mistakes are where many of our new journeys begin, and what we learn can help us return safely.

Dan Keenan has been with NASA nearly 25 years.