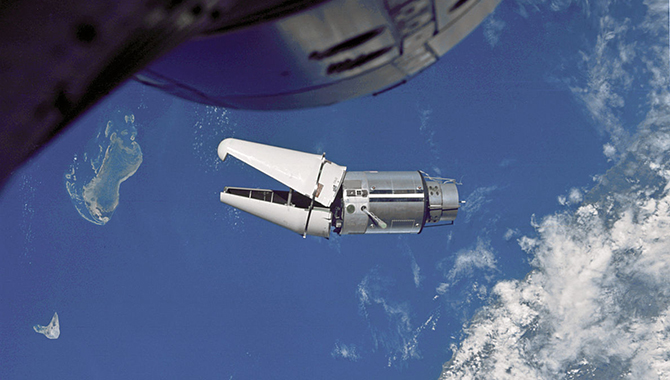 A primary mission objective for Gemini IX-A was to dock with the Augmented Target Docking Adapter (ATDA). During the ATDA launch, however, its payload fairing failed to separately completely, which blocked the docking port. According to astronaut Stafford, the half-open jaws of the ATDA’s un-jettisoned shroud looked like an angry alligator.

Project Gemini, a series of manned and unmanned spaceflights in low Earth orbit (LEO), served as a bridge between the Mercury and Apollo programs. Gemini’s missions were designed to prove technology and procedures that would support the upcoming lunar exploration initiative.

Gemini IX was the seventh manned flight in the series. Up to that point, the program had experienced notable successes as well as significant disappointments. Gemini IV demonstrated the first American extravehicular activity (EVA), while Gemini VI and VII rendezvoused successfully. However, attempts to rendezvous and dock on orbit with an unmanned Agena Target Vehicle (ATV) had not yet gone smoothly.

The program hoped that would change with Gemini IX. On the morning of May 17, 1966, an ATV launched from Cape Canaveral aboard an Atlas launch vehicle. Moments later, the mission’s hopes deflated when Atlas engine problems sent the rocket and the ATV crashing into the Atlantic. Without a target to rendezvous and dock with, the Gemini IX launch was scrapped.

The mission was reconceived as Gemini IX-A. This time, the spacecraft would hunt down an Augmented Target Docking Adapter (ATDA), not an ATV. The ATDA left Earth on June 1. The Gemini spacecraft had a 40-second launch window to head up after it, but that window closed before they were able to get off the ground. Instead, Gemini IX left Cape Canaveral two days later on a Titan II. Command pilot Thomas Stafford was at the controls, supported by astronaut Eugene Cernan.

The primary objective for Gemini IX was to demonstrate techniques and processes, rather than technology, that could be used for Apollo. The main focus was rendezvous and docking. The team planned to rendezvous in the third orbit, which was earlier than had been done so far. Some worried the third orbit was too soon, but it was incorporated into the flight plan because it closely reflected a lunar orbit rendezvous scenario. A second objective was to conduct an EVA that would test a new Astronaut Maneuvering Unit (AMU). Another goal was to demonstrate a precision landing after reentry. Finally, the crew went up with seven experiments to complete over the course of the three-day mission.

Following launch, Gemini IX-A achieved its 158.8 x 266.9 kilometer orbit and revolved three times before initiating the rendezvous with the ATDA. The process went smoothly: the spacecraft arrived within eight meters of the target and was poised to begin docking. But that proved impossible. On June 1, telemetry signals following the launch of the ATDA had suggested that the payload fairing might have failed to jettison, in which case the docking port could be blocked. As soon as Stafford and Cernan reached the target, they confirmed the bad news. Carefully maneuvering the spacecraft around the ATDA, they saw that the explosive bolts had functioned as planned but an error during the installation process had left a set of lanyards taped down, preventing the shroud from ejecting properly. With its jaws stuck half open, the whole thing looked, said Stafford, “like an angry alligator” floating in space.

The crew considered their options. One was to inch the Gemini IX-A close enough to the ATDA to push the shroud’s jaws fully open using the docking bar on the spacecraft. Another was to perform an EVA so Cernan could snip the lanyard wires causing the problem. But jagged surfaces abounded on the ATDA, posing a serious hazard to an astronaut in a spacesuit. Mission control told them to abandon all plans for docking.

Instead, using time they would have spent docking, the crew completed two additional rendezvous processes that were directly relevant to Apollo. Leaving the vicinity of the ATDA, they returned using optical tracking—not radar—to hunt down the target. The Apollo Program intended to rely on optics for all rendezvous activities because the radar had been removed from the command and lunar modules to reduce weight. As a result, the Gemini IX-A experience offered important insight into the process.

The third rendezvous occurred the next day. After a largely sleepless night, the crew pursued a rendezvous-from-above maneuver, a technique that would be used by Apollo in the event of an emergency abort from the lunar surface. The maneuver was successful, though the crew required radar to locate the target.

The next objective, the EVA, was postponed until the following day. Cernan’s goal was to test the AMU, a hydrogen peroxide-fueled unit that would enable astronauts to control their attitude and stability outside of a spacecraft. But the EVA did not go as planned. Cernan struggled throughout, constricted by the conditions despite extensive work in the simulator back on Earth. Eventually, sweat produced by his exertions interacted with the air-cooling technology of the suit, causing his faceplate to fog and significantly impairing his vision. Though the EVA lasted more than two hours, he wasn’t able to resolve the fogging problem and so was unable to test the AMU. Nonetheless, he set a record for the longest EVA yet.

On June 6, Gemini IX-A returned to Earth. It landed within a kilometer of the intended site, achieving the desired precision landing. Responses to the mission were mixed. Some, including the crew, remained frustrated by their inability to perform a docking maneuver and the challenges with the faceplate during the EVA. Others focused on the mission’s notable achievements. First, the crew performed precise, perfectly executed maneuvers around the ATDA to determine the cause of the shroud failure. Second, the installation error that caused the blockage of the docking port provided key lessons that were implemented during future ground operations. Third, they demonstrated advanced rendezvousing techniques that were directly relevant to the Apollo Program’s plans. Finally, Cernan’s struggles with the faceplate pointed out a serious problem with the spacesuit’s environmental control system. As a direct result of Gemini IX-A, the suits used for Apollo featured a water-cooling system to avoid the vision-obscuring issues caused by the air-cooling system in Cernan’s suit. Given that Gemini existed as a space-based “learning institution” for the lunar exploration program, Gemini IX-A was a success: through the careful work of the crew on both the planned and back-up objectives, it delivered crucial information that supported NASA’s journey to the moon.