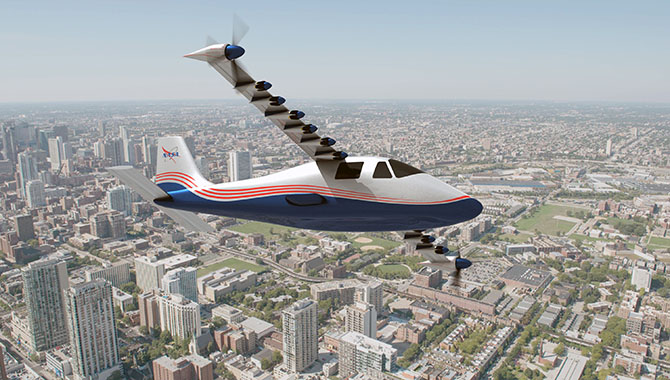 In 2017, NASA Aeronautics will launch a new X-plane program as part of a 10-year plan to transform the American aviation industry.

Since the first X-plane emerged in 1946, NASA and its predecessor, the National Advisory Committee for Aeronautics (NACA), have periodically employed these experimental technology demonstrators to explore cutting-edge technologies and systems. NASA plans to resume this tradition with a new series of piloted X-planes, starting next year with the X-57, also known as Maxwell. A small-scale, general aviation-sized X-plane, Maxwell is being developed as part of NASA Aeronautics’ New Aviation Horizons (NAH) program. The aircraft, which features 14 electric motors that drive propellers integrated into a novel wing structure, will examine new propulsion technology in order to produce a five-fold reduction in energy consumption for a plane flying 175 miles per hour. Electric propulsion aircraft are expected to be quieter, more efficient, and “greener” than current commuter planes.

In a keynote address at the American Institute of Aeronautics and Astronautics (AIAA) Aviation 2016 conference, NASA Administrator Charlie Bolden described the program and said, “We hope to validate the idea that by distributing electric power across a number of motors integrated with an aircraft this way, we can reach those propulsion goals along with fuel savings.”

Over the coming decade, NAH will develop five larger-scale X-planes as well. Three will be subsonic vehicles designed to explore meaningful reductions in fuel, emissions, and noise without sacrificing performance. A fourth large-scale X-plane will explore hybrid-electric propulsion and aspects of aircraft integration. The final proposed X-plane, the Quiet Supersonic Technology demonstrator (QueSST), will focus on supersonic transport. The concept behind QueSST is to achieve supersonic speeds without the sonic boom that currently plagues supersonic aircraft. NASA’s plan is to use data from QueSST to encourage federal and international regulators to institute new noise standards that would permit overland commercial supersonic flight.

In addition to the new X-planes, NASA Aeronautics is exploring novel “green” aviation technologies through its Environmentally Responsible Aviation (ERA) project. One recent technology demonstration featured a stress test of a 30-foot, multi-bay composite aircraft structure. This structure features a unique “stitching” technique that would enable NASA to build aircraft in new shapes, moving beyond the limitations of current aircraft design. Furthermore, the composite is light in weight, which will help reduce fuel consumption and emissions.

Another recent ERA project, in partnership with industry, looked at propulsion innovations, including, said Bolden, “a change in the design of a turbine engine’s compressor stage that improved fuel efficiency by 2.5 percent.” Other ERA efforts included modification of a geared turbofan jet engine to reduce fuel burn by 15% and significantly reduce noise, and the enhancement of a jet engine combustor design to reduce nitrogen oxide production by almost 80%.

“Now we need to bring those concepts on which we’ve been working from the developmental stage to full-fledged reality if we are to solve the growth-related challenges facing the global aviation community during this first half of the 21st century,” said Bolden.

The goal, he added, is to develop aircraft that use 50% less fuel, produce 75% fewer emissions, and are notably more quiet than today’s vehicles. Doing so will have profound benefits for the industry. “It’s possible, according to our computer models, that airlines could save more than $250 billion between 2025 and 2050.”

To achieve its goals, NASA Aeronautics has developed a series of research-focused roadmaps designed to advance solutions, over the next decade, to aviation challenges in six key thrust areas. This 10-year plan, said Bolden, “achieves revolutionary breakthroughs in new aircraft and air traffic management technologies.”

The program is supported by the 2017 Presidential Budget Request, which includes a $790 million budget for NASA Aeronautics plus $10.6 billion over the next 10 years in support of a government-wide initiative to create a cleaner, “greener” transportation system.

The budget request, ample though it is, isn’t enough on its own, cautioned Bolden. Partnerships between NASA, other government agencies such as the Federal Aviation Administration (FAA), academia, and private industry are crucial to the successful transformation of American aviation.

“Our success will depend on you and your companies and a willingness to believe in this audacious future,” Bolden told AIAA Aviation 2016 attendees. “Our strategic plan presents a vision for the next generation and we want you to be there with us every time we soar.”