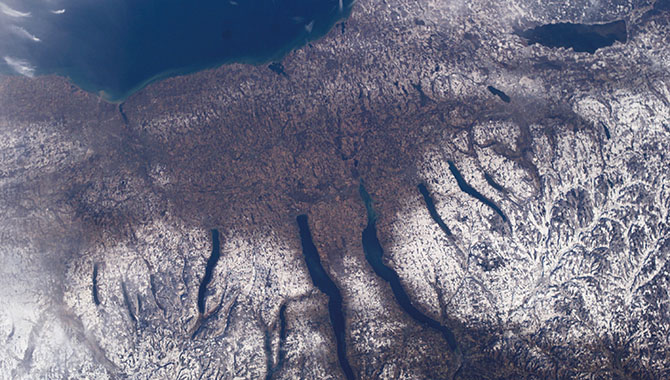 This image of New York’s Finger Lakes region was taken from the International Space Station. U.S. Chief Technology Officer Megan Smith noted that the Finger Lakes were the site of the first women’s rights convention in 1848.

A recent NASA-hosted event examined current successes as well as future challenges and opportunities for getting women and girls to engage with data to solve key global concerns.

“Advancing gender equity and opening doors for women and girls in all the sectors and on all fronts is critical to maximizing our potential as a nation and as a planet,” said NASA Chief Scientist Ellen Stofan, speaking at NASA’s Engaging Women and Girls in STEM through Data Science event, which was part of the White House’s United State of Women Summit.

The U.S. has made great efforts to integrate women into science, technology, engineering, and mathematics (STEM) fields, and NASA’s workforce is a prime example. “Women have made significant contributions to our agency since its inception,” said Stofan. She stated that the newest class of astronauts is 50% women and 50% men, and added, “NASA is more than just astronauts. We have women engineers, mathematicians, geologists, biologists, astrophysicists, and—yes—rocket scientists. We have women leading our centers, overseeing launches, building rockets, studying our earth, studying the stars, interpreting data of all kinds.”

Some of the barriers to expanding female involvement with data and STEM includes bias in the classroom and workplace. In addition, a lack of female role models in these fields can make it difficult for girls to envision themselves becoming scientists or engineers.

Megan Smith, U.S. Chief Technology Officer, pointed out that the problem exists throughout the nation, often because people lack the confidence to pursue careers in science, technology, engineering, or mathematics.

“[There are] 600,000 jobs open across the whole country in technology that pay 50% more than the average American salary. But people aren’t going for them,” she said, adding, “It’s 15 to 1 boy programmers to girl programmers in children’s television, and it’s worse for people of color.”

To help combat these disparities, NASA supports a range of initiatives designed to develop a new generation of girls and women who will work with data to make a difference in the world. One such initiative is the International Space Apps Challenge, a worldwide hackathon in which NASA offers its data to individuals, encouraging them to examine and explore the information together in order to use it in novel ways.

Dr. Shobhana Gupta, NASA American Association for the Advancement of Science (AAAS) Science and Technology Policy Fellow, described Space Apps as “a safe space for men and women to come together to collaborate on ideas and gain the confidence to become future leaders and innovators.” From a NASA perspective, said Beth Beck, Open Innovation Program Manager from the NASA Office of the Chief Information Officer, the Space Apps Challenge is NASA’s “open-data incubator. It’s our opportunity to allow citizens to come engage in our data.”

Unfortunately, only about 20% of participants in the Space Apps Challenges are female. To shift this, NASA developed Data Bootcamp, a one-day event that introduces the concepts used in Space Apps Challenges. This approach has helped women feel more empowered to participate in the hackathons and develop apps of their own.

A third initiative is the Datanauts, which provides an ongoing opportunity for individuals to engage with NASA data and use it in innovative ways that will benefit their own communities, the nation, and the world.

Through these programs, NASA encourages women to leverage data in order to drive change. One person who has done so is Jerelyn Rodriguez, a member of the founding class of Datanauts. Data had a profound effect on Rodriquez at an early age, when she learned that only about 10% of people from low-income areas go on to earn a degree from college.

“[T]his statistic changed my life because, from that day on, when I was in college and during my early career, I was motivated daily to figuring out what I can do to make sure that the 90% of kids in my neighborhood that weren’t going to succeed in college had an alternative pathway,” she said. Rodriguez eventually became co-founder and CEO of The Knowledge House, a non-profit that engages youth and young adults in technology in the South Bronx.

Michelle Easter, an engineer at the Jet Propulsion Laboratory (JPL), used her personal experience as inspiration. After following an unconventional path to attaining her own engineering degree, Easter developed Mind Makers to engage others in the field of engineering.

“Mind Makers was born last year,” she said. “It’s a non-profit education initiative. Our goal is to try to make engineering education approachable and accessible for other people that are from unconventional backgrounds or not traditionally served in the STEM fields.”

These programs and other NASA initiatives focus on sparking excitement in girls and women about working in STEM fields by encouraging them to explore their own potential. This, said, Rodriguez, is crucial. “Women are more social minded. We like to give back, and so it’s very critical that we start empowering girls and women with these tools so that we can be the leaders to solve tomorrow’s problems.”

These women and others are helping clear paths for others to follow. “It’s not just about being first,” said Newman. “First doesn’t matter at all if there’s not a second and a third and a tenth and a hundredth.”

Stofan emphasized the importance of ensuring a long succession of women in data science and STEM sectors. “We are developing the Mars generation,” she said. “We need […] help bringing in women and girls into STEM fields to contribute to this journey—and maybe even be one of those first astronauts, those first scientists, to walk on the surface of Mars.”

Find out about the United State of Women Summit.