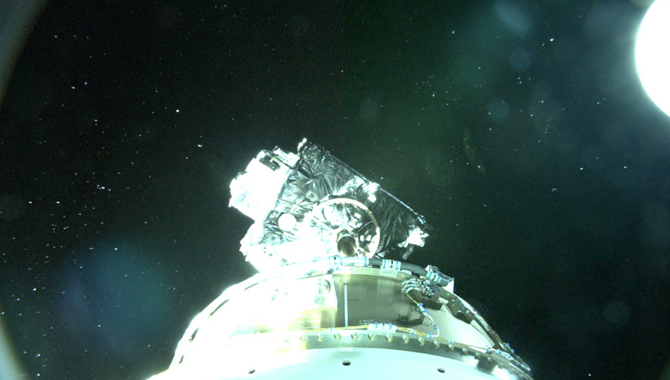 Following its successful launch on a ULA Atlas V rocket, GOES-R separated from the upper stage of the Centaur main engine.

On November 19, NASA launched the Geostationary Operational Environmental Satellite-R Series (GOES-R), which will revolutionize weather forecasting in the Western Hemisphere.

The National Oceanic and Atmospheric Administration’s (NOAA) GOES series of satellites have been an integral part of U.S. weather observation since the first one launched on October 16, 1975. GOES-R, the 16th satellite in the GOES Program, marks an advance in capabilities that will deliver higher resolution and more frequent updates to weather forecasters across the nation.

“NOAA’s GOES-R satellite, with its advanced technologies, will be a game changer for weather forecasting and climate science for many years to come,” said Stephen Volz, NOAA assistant administrator for satellite and information services, during a prelaunch briefing. “For weather forecasters, GOES-R will be similar to going from a black and white TV to super high-definition TV. For the American public, that will mean faster, more accurate weather forecasts and warnings.”

Once operational, GOES-R will scan the skies five times faster than the existing GOES satellites, providing four times the spatial resolution and three times the number of spectral bands.

“This means we’ll have better quality data at high resolution far more often than we do today. Forecasters will have far more detailed views of weather systems. We’ll be able to see rapidly developing events in real time. And when we see an evolving weather system, we’ll be able to zoom in and use that high spatial resolution to take pictures in 16 different spectral channels every thirty seconds,” said Joe Pica, director of the National Weather Service Office of Observations. “This spectral imagery combined with our Doppler radar, for example, will improve our understanding of whether a storm is growing or decaying.”

The satellite features six instruments new to the GOES system. The primary instrument is the Advanced Baseline Imager (ABI), which offers notable improvements in speed, resolution, and breadth of coverage. In addition to those advances, GOES-R will include a novel instrument: the Geostationary Lightning Mapper (GLM). The GLM will be the first operational space-based system designed to detect total lightning activity over land and water. It will help forecasters identify storms that post the greatest threats.

“Here we have an instrument that will be taking photos of the lightning fields of the Western Hemisphere about 200 times a second. And when you compare all those, you get a sense of where the severe weather is starting to really brew,” said Greg Mandt, NOAA GOES-R system program director.

“Basically, lightning is correlated to some of the most severe weather, so we can see where hazardous conditions such as damaging winds, tornados, large hail, and flash flooding will occur,” said Pica.

In addition to the earth-pointing systems, GOES-R carries space weather instruments: the Solar Ultraviolet Imager (SUVI), which will image the surface of the sun, the Extreme Ultraviolet and X-Ray Irradiance Sensor (EXIS), which will measure energy from the sun, the Space Environment In Situ Suite (SEISS), and a magnetometer focused on Earth’s magnetic field.

The benefits of GOES-R will extend beyond U.S. borders to Latin America and the Caribbean, reflecting NOAA’s ongoing commitment to providing real-time images from its geostationary satellites to countries throughout the Western Hemisphere. This will continue with GOES-R, enabling other nations to provide more accurate forecasts and warnings of severe weather events.

GOES-R is the product of work that spans decades. “We have over 100 scientists across the country [who have] been working on the program for one or two decades now, developing the science products and the algorithms and the recipes for how to turn the measurements from the satellite into useful products for warning and forecasting,” said Steven Goodman, GOES-R program scientist at NOAA. The result is images that offer a degree of detail never before seen. “For example, we can see waves in the clouds which are related to the turbulence that, if you’re flying on an airplane, you might encounter. And so we’ll have early indication of areas to avoid which we couldn’t see before.”

For NASA and NOAA, GOES-R is the latest step in a longstanding collaboration. “NASA scientists and engineers have been working with NOAA for generations—and I mean that literally, because this program is more than 40 years old—on our critical weather mission,” said Volz. Goddard Space Flight Center (GSFC) oversaw the acquisition of the GOES-R spacecraft and its instruments. The agency’s Joint Agency Satellite Division partners closely with NOAA to support GOES-R as well.

“We serve as the acquisition arm for NOAA, where we bring to bear NASA’s scientific and engineering expertise and the development of space flight and ground systems to support our partner organizations. Specifically for GOES-R, we support the development of the spacecraft. We launch it, we commission it, and then we end up transitioning it to NOAA for operations,” said Sandra Smalley, director for NASA’s Joint Agency Satellite Division in the Science Mission Directorate (SMD).

GOES-R will reach its operational orbit, roughly 22,000 miles above the earth, about two weeks after launch. A year later, following validation and checkout by NASA and then by NOAA, the satellite will begin providing data to forecasters and other users across the Western Hemisphere.

“NOAA’s GOES-R is a major step forward in our effort to build a weather-ready nation. By advancing our observation capabilities to the next level, we will be able to offer new and improved forecasts, products, and services to help save lives and property,” said Pica.

NOAA manages the GOES Program through an integrated NOAA-NASA office. Lockheed Martin manufactured the spacecraft and two of the instruments. The remaining instruments were provided by the Harris Corporation, the Laboratory for Atmospheric and Space Physics, and the Assurance Technology Corporation. NASA’s Launch Services Program at Kennedy Space Center (KSC) managed the launch on a United Launch Alliance (ULA) Atlas V vehicle.

Learn more about GOES-R in this video.

Watch this video for a brief history of the GOES Program.