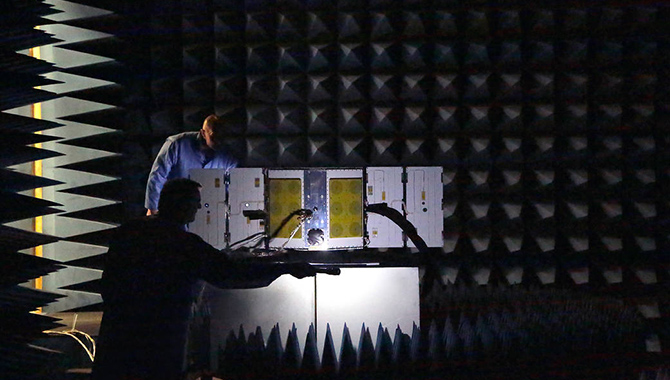 One of the CYGNSS microsatellites undergoes environmental testing in a radio frequency anechoic chamber at the Southwest Research Institute, San Antonio, TX.

Seeing inside the core of a hurricane from space to assess the storm’s intensity has been largely impossible—until now.

CYGNSS is designed to measure wind speed over the ocean during hurricanes. Measuring the maximum sustained wind in a hurricane’s core will enable forecasters to predict the storm’s intensity, which is crucial for determining its potential impact. Before CYGNSS, space-based weather satellites were unable to obtain the necessary wind speed measurements. NASA’s Tropical Rainfall Measuring Mission (TRMM), for example, operates at a wavelength that experiences too much disruption from rain drops to “see” inside the core of a hurricane to measure wind.

“TRMM operates at an eight-millimeter wavelength, and rain drops are typically one to five millimeters in heavy rain. If the rain drops are comparable in size to the wavelength of the electromagnetic waves, you get a lot of scattering and a lot of absorption and you can’t penetrate through. So we just can’t measure wind under heavy rain from space,” said Chris Ruf, CYGNSS principal investigator with the Department of Climate and Space Sciences and Engineering at the University of Michigan.

Currently, the only way to measure wind speed through heavy rain is with a specially equipped National Oceanic and Atmospheric Administration (NOAA) aircraft known as a P-3 hurricane hunter. These aircraft, which are flown directly into hurricanes, carry instruments called Stepped Frequency Microwave Radiometers (SFMR) that are capable of measuring winds on the ocean surface during heavy precipitation because they operate at a five-centimeter wavelength. At roughly 10 times the size of a rain drop, this wavelength isn’t incapacitated by interference from rainfall.

Another limitation to space-based systems is the frequency of sampling. TRMM and other satellites take two to three days to orbit the earth. “This is fine for a lot of applications, but for extreme weather situations like hurricanes, where things change on the time scale of hours to maybe a day, if you make a new measurement once every three days, it’s very likely that you’ll miss important parts of the evolution of the storm,” said Ruf.

CYGNSS is designed to combine the global coverage of a satellite system with the ability to penetrate through rain to assess wind speed inside a hurricane. It will also sample far more frequently than current weather satellites, with only about seven hours between passes over the same area.

CYGNSS works by utilizing reflected signals from existing GPS satellites. “CYGNSS is basically the receive half of a radar. The transmit half of the radar is the GPS constellation of navigation satellites,” said Ruf. GPS satellites constantly transmit their signals to Earth for navigation purposes. Operating at a very long wavelength, they are designed to transmit effectively even in heavy rain. “What we’ve done with CYGNSS is we’ve taken a commercial navigation receiver and essentially hacked into it and modified its processor so that it does both navigation and it also measures the distortion of the navigation signal after it reflects off of the ocean surface. By looking carefully at the nature of the distortion, we can back out the properties of the ocean surface that are forced by the local winds,” he added.

“We take advantage of GPS reflected signals off the ocean surface to measure the surface winds. From an engineering standpoint, that’s a very enabling technique. Since we are only receiving signals—we’re not having to generate the signals, we’re receiving them from the GPS, [which are] essentially flying radio stations—it allows the spacecraft to be very small,” said John Scherrer, CYGNSS project manager. “Because we’re so small, it allows us to fly eight of these in a relatively low-cost launch vehicle.”

The CYGNSS microsatellites will orbit the earth at 35 degrees inclination, where most tropical cyclones occur. To reach orbit, the satellites were air-launched from an L10-11 airplane via an Orbital ATK Pegasus XL vehicle as part of a “ferry-flight” mission. The Pegasus rocket was mated to the L10-11 at Vandenberg Air Force Base in California. The eight CYGNSS microsatellites were attached to a deployment module, which was connected to the launch vehicle. The entire system was then flown to Florida for launch, as the inclination of the Vandenberg base did not support the mission. At 39,000 feet, far out over the Atlantic Ocean, the Pegasus dropped from the L10-11 and rocketed out of the atmosphere. The microsatellites were subsequently released in pairs.

To keep mission costs as low as possible, the microsatellites function without propulsion systems. While this enabled the project team to afford eight microsatellites—which was crucial for achieving the sampling frequency required for mission success—they needed to find some way to separate the microsatellites after launch and keep them spread relatively evenly across the desired orbit. Aaron Ridley, CYGNSS constellation scientist with the Department of Climate and Space Sciences and Engineering at the University of Michigan, came up with a solution.

Following deployment, the satellites are closely grouped, which is not ideal. “We want them to be spaced about 3,000 miles apart from each other. And the way that we’re going to do that is as these things come apart from each other, we’re going to start tilting them up,” said Ridley. Tilting a satellite—putting it into high drag mode—will decrease its speed and provide control over its position relative to the rest of the constellation, ultimately allowing the team to manage fleet formation. “[W]e’re going to have meetings every week where we’ll decide which satellite we want to put into high drag mode,” he added.

CYGNSS was launched in December to give the team time to calibrate the fleet before the start of the 2017 hurricane season. Science operations will commence in the second month after launch. Data from CYGNSS will be validated in several ways, with primary confirmation coming from NOAA’s P-3 hurricane hunters.

“[T]hey’re willing to try as much as possible—within the constraints of their charter—to underfly us when we go over hurricanes, and to fly the flight line of the airplane parallel to our ground track…so that we have as much coincident match up as possible between the airborne measurements of the traditional way of measuring the winds and the CYGNSS measurements. So that’s going to be our primary validation tool in the hurricanes themselves. And then away from the hurricanes there are a lot of standard ways to validate the quality of wind retrievals, and we’ll be using those as well,” said Ruf.

The two approaches to hurricane wind-speed measurement—CYGNSS and the hurricane hunter aircraft—are complementary, not redundant. Traveling directly through the storm, the hurricane hunters provide a degree of spatial resolution that a space-based mission cannot match. “So you get a finer resolved variation in the wind gradients as you pass through the eyewall,” said Ruf. Hurricane hunters also have the ability to measure the vertical profile of storm characteristics, which CYGNSS will not do.

“But the temporal sampling characteristics for CYGNSS are much better because we have global coverage with lots of satellites,” he said. Together, the two approaches will enable forecasters to predict the intensity of a hurricane far more effectively than before.

NASA’s Earth Science Division in the Science Mission Directorate oversees the CYGNSS mission, which is part of its Earth Venture Class program. The Space Physics Research Laboratory at the College of Engineering, University of Michigan, Ann Arbor, heads up overall mission execution. The University’s Climate and Space Sciences and Engineering department leads the science mission.

View the launch of CYGNSS as the Pegasus XL rocket drops from the belly of the L10-11 aircraft.

Watch University of Michigan doctoral candidates who work on CYGNSS talk about their work.

Read an earlier APPEL News article about the CYGNSS mission.