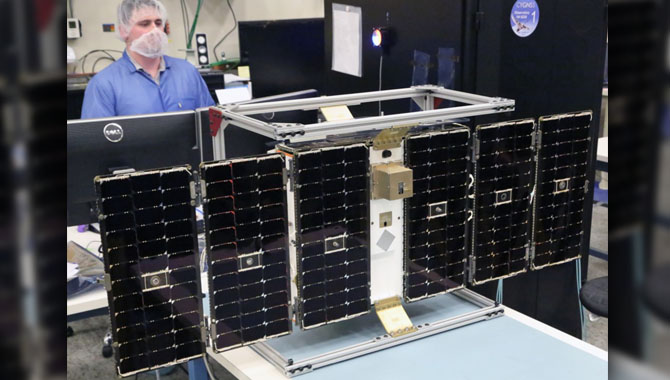 A CYGNSS satellite under construction in the lab.

On December 12, 2016, NASA will launch a novel mission featuring a constellation of eight microsatellites to deliver unprecedented insight into the inner core of hurricanes.

The Cyclone Global Navigation Satellite System (CYGNSS) mission was conceived to meet a distinct need in global hurricane and tropical storm forecasting. Over the past two decades, technology has greatly improved the ability to predict where a hurricane will land—but not how strong it will become over the course of its life cycle.

“[W]e have struggled with improving determining how hard the hurricanes will hit, what’s the wind speed when the hurricanes make landfall. And both components are very important for determining if people should leave their homes,” said Aaron Ridley, mission constellation scientist for CYGNSS at the University of Michigan in Ann Arbor.

The difficulty in predicting the strength of a storm is due to limitations in existing technology. Current satellite-based methods for assessing storm intensity by measuring wind speed on the ocean’s surface have two critical limitations. First, their signals cannot penetrate through rain: the size of the signal wavelength causes too much interaction with precipitation to “see” through to the inner core of a hurricane to measure wind speed. Second, samples are only obtained once every two or three days, which increases the likelihood of missing the rapid intensification phase when a storm transitions from a tropical depression into a hurricane.

CYGNSS was designed to overcome these limitations by accurately measuring ocean surface wind speeds inside hurricanes to predict how a storm will evolve. “It makes the measurements in two important, different ways that are going to enable it to improve on our ability to monitor the inner core of hurricanes and ultimately improve our ability to forecast hurricanes,” said Chris Ruf, CYGNSS principal investigator at the University of Michigan’s Department of Climate and Space Sciences and Engineering.

“The two critical things that we’re trying to do with CYGNSS are to sample much more often than once every three days and to be able to penetrate through the rain,” said Ruf. By working at a long wavelength, CYGNSS will be able to measure the winds inside of a hurricane without interference from precipitation. And by utilizing a much smaller instrument than is used on current weather satellites, CYGNSS will be able to deploy eight instruments on eight microsatellites that orbit the earth at hurricane latitudes, enabling far more frequent sampling. Once the satellites are evenly distributed across the globe, each CYGNSS satellite will be able to provide new wind speed measurements for a given location in their target orbit once every seven hours.

“The exciting thing about CYGNSS is it provides a new technology to both make the measurements in the rain and also to support the capability for many, many satellites in a constellation because of the inherent low cost of this particular remote sensing technique,” said Ruf.

“We’re doing real science with a spacecraft that literally can sit on your desk right here,” said John Scherrer, CYGNSS project manager at the Southwest Research Institute (SwRI) in San Antonio, TX. “And not just one of them, but we’ll have eight. They’ll be orbiting in the tropics where the hurricanes are, and every 90 minutes making another measurement.”

The CYGNSS microsatellites will receive signals from existing GPS satellites in order to assess wind speed at the ocean’s surface. Each microsatellite will carry a Delay Doppler Mapping Instrument capable of tracking four GPS signals simultaneously. The satellites will also carry two downward-facing antennas, which look toward the ocean, and an upward-facing antenna. “The whole payload weighs seven pounds and only takes 12 watts of power,” said Scherrer.

“CYGNSS will be launched and operated for $162 million, including all the building and all the science,” said Christine Bonniksen, CYGNSS program executive with the Science Mission Directorate’s (SMD) Earth Science Division. “[I]n addition to being low cost,” she added, the mission, “came in on schedule, on cost, and on science.”

Science operations are expected to commence during the 2017 Atlantic hurricane season and continue for two years. Over the course of the mission, CYGNSS will provide coverage of the tropical cyclone zone 24 hours a day, seven days a week, improving understanding of how hurricanes develop in order to better prepare authorities and protect people in the path of storms.

CYGNSS is the flagship mission for the Earth Science Division’s Earth Venture Class program, which supports low-cost, science-driven missions designed to investigate the complex Earth system. The Earth Science Division oversees the CYGNSS mission. At the University of Michigan, Ann Arbor, the Space Physics Research Laboratory at the College of Engineering leads the overall mission execution and the Climate and Space Sciences and Engineering department leads the science mission.

Watch a video about the testing and integration work done to support the success of CYGNSS.

Read an APPEL News article about how small satellites are being used in diverse ways to advance innovation at NASA.