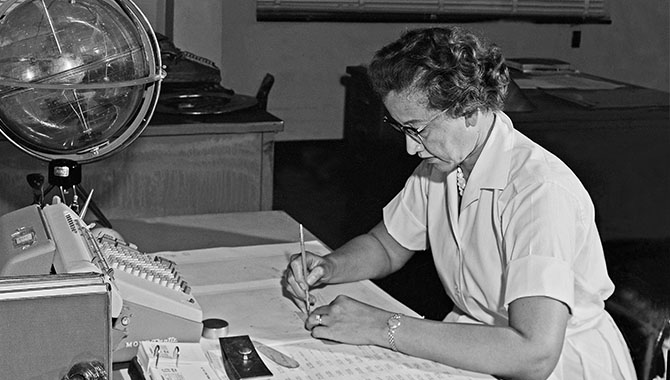 Research mathematician Katherine Johnson, one of the “human computers” whose calculations helped send astronauts safely to the moon, at her desk at Langley Research Center in 1962.

NASA’s predecessor, the National Advisory Committee for Aeronautics (NACA), hired its first human computers in 1935. Engineers at the NACA resented spending time doing mathematical calculations to support their research, so the agency conducted an experiment: they brought on five white female “computers” to do the work instead.

“When they were done with the experiment after a few months, they realized the women were much more accurate, much faster, and did a better job—and didn’t complain. And you could pay them less,” said NASA Chief Historian Dr. Bill Barry. “That actually got put in a memo: ‘Isn’t this great? They do this great work and they’re cheap.’”

“It was a very tense period of time between the United States and the Soviet Union,” said Barry. “The space race became a surrogate for the struggle between those two countries, and so what was happening at NASA was critical to the country. President Kennedy set the goal to land on the moon in part to prove that the United States had a viable socioeconomic system—because people actually thought that the Soviet system might be better than the U.S. one because they were so successful in space.”

He added, “We hadn’t done this before, and so those calculations were absolutely critical to understanding how we were going to safely put people in and out of space.”

The women hired to do that critical job included Katherine Johnson, who began attending college courses at age 13 thanks to her prodigious math skills. Johnson, a research mathematician, eventually joined the all-black West Area Computing section at the NACA, where she met Dorothy Vaughn, Mary Jackson, and other women featured in the book and the film. Johnson excelled at the NACA and NASA. One of the tasks that she and other human computers performed was calculating the planned trajectories of spacecraft. In 1962, astronaut John Glenn insisted that Johnson double-check the electronic computer calculations for the trajectory of his Mercury mission, the first-ever manned orbital spaceflight.

The NACA and NASA had a long history of relying on human, not electronic, computers. “The NACA bought its first computer in the late 1940s. It was one of these giant, room-sized UNIVAC computers. It took a very long time to program it to tell it what to do, so it wasn’t used very much. It wasn’t until later in the fifties that computers started being used for scientific research. But they were again slow, not highly reliable. You’d have to have a human computer check to make sure the calculations were correct,” said Barry.

Even today, said Williams-Byrd, human computation plays an important role at NASA. “Computers are great. But if we don’t understand the information that we are putting into the computers, then we never know what we’re getting out of [them],” she said.

The first African American women computers joined the NACA in 1943. “They all had college degrees in mathematics. They were all extremely bright,” said Barry. “The African American women computers were actually more qualified than their white counterparts who worked at the NACA at the time, so they naturally flourished.” The network of computers grew quickly as their skill became known at the agency and as other talented African American women learned about the jobs, which paid well and employed their skills in the service of interesting, demanding work. It wasn’t without challenges, and the women were confronted with racism and sexism at times. But they focused on getting the job done.

“They performed,” said Bolden. “They essentially put their heads down and did what they were asked to do. They set goals…and they went after those goals without paying any attention to people who said it could not be done. I think they provide a role model, or role models, for all of us.”

He and Williams-Byrd offered advice for people facing bias or discrimination today.

“When you deal with people, you have to recognize that everybody has their own perspective,” said Williams-Byrd. “So you have to be confident in who you are, the background that you have. Think about those people who have encouraged you—your parents, your teachers—and be able to use that as confidence that you can move on and do the things that you need to do.”

“Don’t waste your time trying to explain to somebody why you’re in the room or in the laboratory,” said Bolden. “You are not going to change someone’s mind by trying to talk them out of a bias or out of being discriminatory. What convinces them is your performance. So really study hard. Become the best that you can be in your field. And then go do your work and do it incredibly well so that people recognize you as the best.”

Until recently, as the title of the book and movie suggests, the African American women computers were not well-known figures in NASA’s history. That, said Bolden, is changing.

“NASA has really been focusing on women in aerospace and women at NASA. [O]n our website, for a number of years now, we have had a feature that’s called Women at NASA, where we tried to feature people that most folk who look at NASA would not think about. When the movie Hidden Figures came along, and the book, it was a perfect match,” he said, as they emphasized the focus on people who contributed meaningfully to the agency first and foremost, and happened to be minorities and women as well.

To raise awareness about the extraordinary contributions of the human computers, and to highlight NASA’s commitment to inclusion and excellence, the agency created a website: From Hidden to Modern Figures. Johnson, who worked at LaRC for more than three decades, figures prominently on the site. She retired from NASA in 1986. In 2015, at age 97, Johnson was awarded the Presidential Medal of Freedom for her contributions to the nation’s human spaceflight program.

Watch Administrator Bolden talk about the human computers, and Katherine Johnson in particular, at NASA.

Watch the official trailer for the Hidden Figures film.