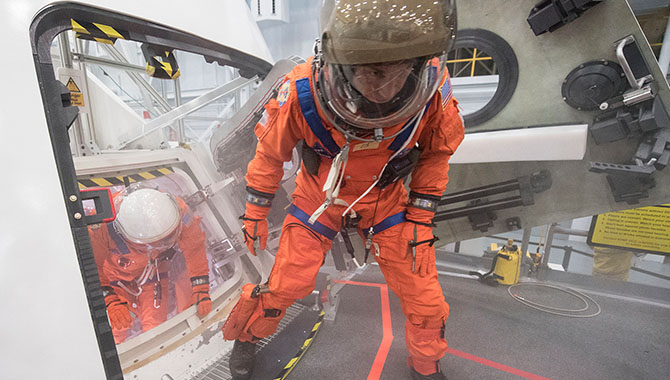 In the Space Vehicle Mockup Facility at JSC, engineers used fake smoke to simulate an emergency scenario in the Orion spacecraft. Astronauts then explored a scenario in which they exited the capsule while their vision was obscured.

“It was the first time that we had flown a vehicle designed to carry humans that far away from Earth,” said Dr. Ellen Ochoa, former Johnson Space Center (JSC) director, speaking at JSC about ongoing efforts to expand manned deep space exploration. “[EFT-1] was testing the items that are really most critical for crew survival, including things like the parachute system and the heat shield. It made headlines not only around the country but around the world. And it’s really just a hint of things to come.”

The next stage of the mission is EM-1. Scheduled for 2020, it will be the first integrated flight of Orion and the Space Launch System (SLS), the world’s most powerful launch vehicle. EM-1 will be followed by EM-2 in 2023: the first flight to unite crew with Orion and the SLS. EM-2 will take astronauts 40,000 miles past the moon—farther than any manned spacecraft has ever gone.

Before EM-2 can get off the ground, the agency will conduct a flight test in 2019 called the Ascent Abort-2 (AA-2). The test will examine Orion’s launch abort system (LAS), which makes it possible to rescue the crew in the event of a catastrophic malfunction during launch.

“[I]t’s really the only full-scale system test that we have before we put crew on the vehicle. So it’s definitely critical for making sure that we can get the crew safely away in an emergency,” said Jennifer Devolites, AA-2 crew module deputy manager.

For the three-minute test, the LAS will be launched from Cape Canaveral on a solid rocket motor providing 500,000 pounds of thrust to propel the system six miles up to the abort condition. At that point, the crew module flight computers will send commands to light the abort motor rocket and separate the crew module from the booster.

“When the abort motor fires, it pulls the crew module away from the booster extremely fast. After 1.1 seconds after abort, we’ve got greater than five F-22 fighter jets on full afterburners in terms of thrust,” said Devolites. “After 15 seconds, the crew modules gain more than two miles of altitude. At around 43,000 feet, the attitude control motor starts to reorient the system. And then after reorientation is complete, the LAS separates to allow the capsule to descend safely back to Earth.”

Work on the rest of the Orion spacecraft is moving forward as well. “Orion is more than just a crew module. It’s a complex set of systems—life support, propulsion, thermal control,” said Annette Hasbrook, assistant manager for Orion Program Integration. “Down at the Kennedy Space Center, we’re making great progress. That is our production facility and that’s where we’re assembling the Exploration Mission 1 spacecraft.”

Below the crew module sits the European Service Module, which is being provided by ESA (European Space Agency). “[The ESM is] being assembled in Bremen by the Airbus Corporation,” said Hasbrook. “They are in almost final assembly and test and will be bringing that service module, delivering it to the Kennedy Space Center later this summer. Once that arrives, we have a 404-day timeline from the time we bring it in until we turn it over to the ground systems at Kennedy Space Center for final integration onto the amazing SLS rocket for launch.”

The agency is also in build for EM-2. “We have multiple vehicles in flow, and the Exploration Mission 2 spacecraft is currently under assembly at the Michoud Assembly Facility down in Louisiana. They’re building their primary structure and that’s going to be delivered to KSC later this summer to begin its integration,” Holbrook added.

While work continues on Orion and the SLS, NASA is also making plans to build the Lunar Orbital Platform-Gateway in the 2020s. This manned spaceport, which will be constructed on orbit, will include a power and propulsion element as well as habitation, logistics, and airlock capabilities.

“NASA and its partners will use the Gateway for deep space operations, including missions on the moon, with decreasing reliance on Earth. We’ll use the lunar orbit as a place to stage: where we will actually build up a small crew-tended spaceport that will then do testing. We will learn about what’s going on at the moon, we’ll do testing on the moon surface, and then we will build up, do other testing, and move on to Mars,” said Vanessa Wyche, director of the Exploration Integration and Science Directorate at JSC.

The power and propulsion element for the Gateway is being led by Glenn Research Center (GRC). The habitation systems are in design, with concepts being worked by five commercial partners. “Of those five companies, there are two that are going to do ground testing here at the Johnson Space Center. We’re readying ourselves for the hardware to show up so that we will test it. That will happen next summer,” added Wyche.

At JSC, the work for EM-1 and EM-2 is being conducted using a “lean development” approach. “[T]hat’s been really one of the goals of this project as well. To look at how we can do things differently. Find more efficiencies,” said Devolites.

One of the areas they have focused on is developing a team culture that encourages people to innovate. “We also reduce cost and schedule through iterative systems engineering,” said Devolites. “By doing that, we actually had 90% of our flight software complete by the time we got to our Critical Design Review because of all the early integrated testing that we did. And we also used an agile software development process for that.” Additionally, the center employs a data-centric, online collaborative system to enhance systems engineering and team communication. This has produced two important results: less paperwork and fast decision-making.

While the focus of EM-1 and EM-2 is on advancing human spaceflight farther than ever before, the mission benefits can be felt on Earth as well. NASA’s work on Orion and the SLS is supported by companies in 49 of the 50 states. These efforts are fueling industries and technology development across the nation, helping advance job opportunities and workforce skill development.

“This is really America’s spacecraft,” said NASA astronaut Nicole Mann. “As you go around the country and you see some of the companies that are building components on this vehicle—yes, we have large companies out there, but we also have a lot of small companies. There’s folks in small towns all throughout the United States that are building a valve or a seal or an instrument or something that is going to be critical to the success of this mission. It’s really exciting to see the American people and everybody really come together in support of this mission.”

Watch a comprehensive video about EM-1.

Learn more about the international collaboration behind Orion and the European Service Module.

Find out how EM-1 will advance low-cost deep space exploration.