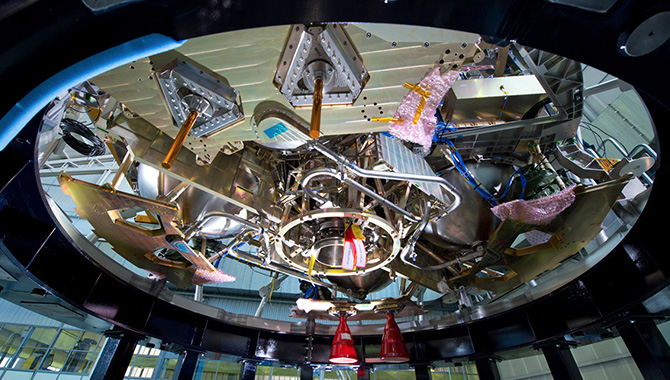 NASA designed the Orion spacecraft to be the first vehicle in more than four decades capable of taking humans beyond low Earth orbit (LEO). Orion flew for the first time during Exploration Flight Test 1 (EFT-1) to test key elements of the crew capsule. After launching from Cape Canaveral, FL, on a Delta IV Heavy rocket, the spacecraft soared for four hours, making two orbits and traveling more than 3,500 miles above Earth before reentering the atmosphere at 20,000 miles per hour. The uncrewed mission was a resounding success.

Orion’s next flight, EM-1, will take place between late 2019 and mid 2020. EM-1 is the first time the crew capsule will be united with the Space Launch System (SLS)—the most powerful rocket in the world—and with another key component of the mission: the European Service Module (ESM). Designed and developed by ESA (the European Space Agency) and prime contractor Airbus Defense and Space, the ESM will provide critical materials and capabilities to support astronauts in Orion’s crew module.

Originally, NASA intended to develop the ESM in conjunction with Orion prime contractor Lockheed Martin. But in 2012, the agency signed an agreement with the Europeans, welcoming them as partners into the Orion Program. Since then, ESA has worked with companies from 11 European countries to design and develop the ESM for EM-1. More recently, the two agencies signed a second agreement to include an ESA-developed service module in EM-2, which will be the first manned mission beyond LEO since the Apollo Program.

To drive efficiencies, the ESM includes some hardware from ESA’s automated transfer vehicle (ATV). From 2008 through 2015, five ATVs transported cargo to and from the International Space Station (ISS) and reboosted the ISS orbit when necessary as part of ESA’s commitment to the space station. Beyond the incorporated hardware, the ESM leverages a heritage of experience, as ESA and Airbus fully understand how to design and build reliable spacecraft that meet international objectives.

An unpressurized cylindrical module, the ESM is five meters wide, four meters high, and weighs 13.5 tons. It is designed to work synergistically with the Orion crew module. Located directly behind the crew module, the ESM will provide propulsion, life support, and structural functions for the Orion spacecraft. The service module’s main engine and smaller thrusters will propel and maneuver the vehicle in space, enabling orbital transfer, attitude control, and high-altitude ascent aborts. Its 19-meter wide solar arrays will generate power, while radiators will regulate temperature within the crew capsule. Enormous tanks in the ESM will carry water for the crew to drink and oxygen and nitrogen for them to breathe. The module will also carry 8.6 tons of propellant. The service module is designed to support crew for up to 21 days on orbit. It will travel with the Orion crew capsule until just before reentry.

In November 2015, a test model of the ESM was sent to NASA’s Plum Brook Station in Sandusky, Ohio for extensive testing to confirm that the module will be able to withstand the stresses of launch. Solar array deployment was also examined. The tests concluded successfully in December 2016. Meanwhile, NASA and ESA completed the ESM Critical Design Review (CDR) in June 2016, which kicked off the building and assembly of the flight model and flight hardware. The CDR for the Orion crew module concluded in March 2016.

Currently, work is ongoing 24 hours a day in Bremen, Germany, to finish work on the flight version of the ESM. The completed module will be shipped to Kennedy Space Center (KSC) in summer of 2018, where it will be connected to the Orion crew module via the Crew Module Adapter (CMA). The integrated modules will be shipped to Plum Brook Station for exhaustive testing, including vacuum and acoustics tests. Once testing is complete, they will be returned to KSC to begin launch preparations. The ESM and Orion crew module will ultimately be integrated with the SLS in the Vehicle Assembly Building at KSC before being rolled out to Pad 39B for the launch of EM-1.

Watch a video about the ESM and Orion.

Learn more about plans for EM-1 in this APPEL News article.