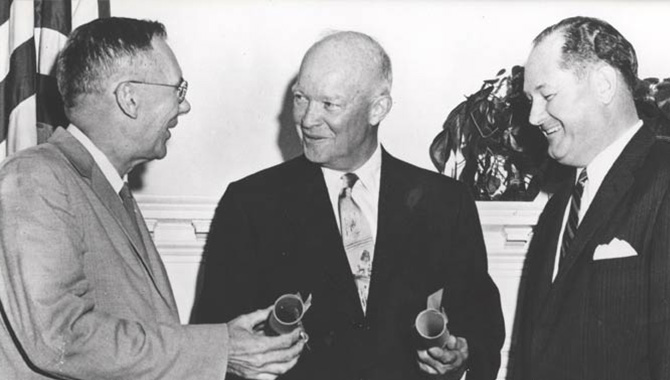 Sixty years ago, a national debate about the shape of the U.S. space program in the wake of Sputnik I and II ended with the creation of NASA.

Sixty years ago this month, President Dwight D. Eisenhower signed the National Aeronautics and Space Act of 1958, creating the National Aeronautics and Space Administration (NASA), which would officially open in October. And so began a bold journey that has included some of the greatest scientific achievements of humankind, and continues today at the extremes of the Sun and Mars.

This signing was the culmination of months of national debate following the launch of Sputnik I and II by the former Soviet Union. This national debate hinged on who would control the nascent U.S. space program and how that control would shape its focus.

At the time, rocket development fell within the purview of the U.S. military. Many in the scientific community voiced concern that this would limit a U.S. space program to military applications at the expense of scientific inquiry.  When Eisenhower named James Killian Jr., then the president of the Massachusetts Institute of Technology, as his Special Assistant for Science and Technology in 1957, he signaled he shared some of those concerns.

Of all the options considered to best guide the U.S. as it worked to meet the Soviet challenge in space, the one that eventually gained the most support was an extensive reworking of the National Advisory Committee on Aeronautics (NACA), which itself was created in 1915 to help the U.S. answer the challenge of European air force superiority during World War I.

Through the 1950s, NACA had been experimenting with designs for rocket powered hypersonic aircraft, such as the X-15, which was developed under NACA but flown for the first time after the creation of NASA. When NASA began its mission on October 1, 1958, it took over five NACA facilities and 8,000 staff members, with a charge to expand human knowledge of phenomena in the atmosphere and space.

In the decades since, NASA has writ large the human experience in space, from the Neil Armstrong’s first step onto the moon to the “success failure” of Apollo 13 to the humanity’s first reusable spacecraft. Today, NASA is conducting ambitious missions to Mars and the Sun. And these missions to expand our understanding of space also produce tangible benefits on Earth.

To learn more about how NASA is marking 60 Years and Counting, see these resources:

Learning about Earth from space

A retrospective on Sputnik

The history of human spaceflight

A listing of special events through 2019

A retrospective on technology