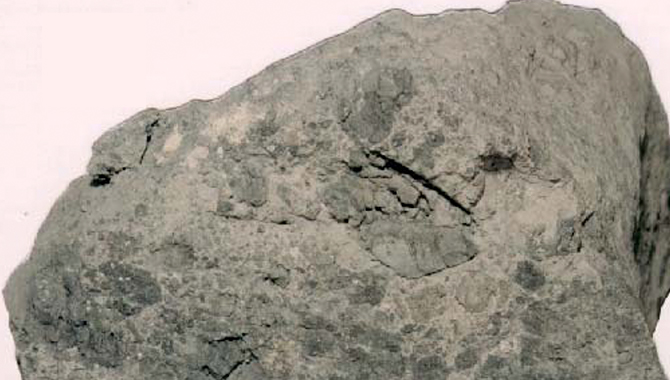 Research team finds clast in Big Bertha that appears to have taken a fantastic journey to the Moon and back.

On February 6, 1971, Alan Shepard, commander of Apollo 14, was walking and collecting samples near the edge of Cone Crater on the surface of the Moon when he reported finding an unusual rock. “There’s a football-size rock, Houston, coming out of this area, which will not be bagged. It appears to be the prevalent rock of the boulders of the area. Got it?” he said.

The astronauts were on the lookout for large stones, such as this, because NASA scientists were interested in studying them for evidence of the interaction of cosmic ray radiation with the lunar surface. Shepard and Lunar Module Pilot Edgar Mitchell worked together to collect the stone, which required awkward maneuvering in their bulky space suits. 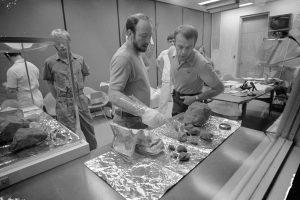 Astronaut Edgar D. Mitchell (left), lunar module pilot, holds up a tote bag in which some of the lunar samples were stowed, while astronaut Alan B. Shepard Jr., commander, looks on.
Credit: NASA

The stone, labeled 14321, was placed in the Lunar Module with approximately 74 pounds of other Moon rocks gathered during the mission. The astronauts called it “Big Bertha.” At nearly 20 pounds, it was by far the largest stone collected during the Apollo 14 mission and is the third largest ever collected from the Moon.

Forty-eight years later, new research suggests that 14321 is perhaps more unusual than anyone knew. According to a research team’s recently published hypothesis, when the Apollo capsule splashed down with Shepard, Mitchell, and Command Module Pilot Stuart Roosa, it might have been a safe return to Earth for not only the astronauts, but Big Bertha as well.

The stone is a breccia comprising pieces of many rocks formed together about 3.9 billion years ago, when a massive object collided with the Moon. In the 1970s, NASA scientists regarded it as a “treasure chest” of important rock clasts from the crust of the Moon. Some of these clasts were large enough for analysis by several techniques at the time and further examination later.

The research team, led by Jeremy Bellucci and Professor Alexander Nemchin at the Swedish Museum of Natural History, focused on a felsite clast in the breccia and found some unexpected characteristics. Secondary Ion Mass Spectrometry indicates the clast formed under geologic conditions with greater oxygen fugacity and cooler temperatures than what science understands about lunar magma.

This leaves the team with two hypotheses—that conditions on the Moon were atypical when and where the clast formed, or that the clast was actually formed on Earth, where these conditions are typical, and then ejected into space, where it landed on the Moon. If the later theory is correct, it would make the clast in Big Bertha one of the oldest Earth rocks ever discovered, and it was unknowingly discovered on the Moon by Apollo astronauts, who returned it to Earth.

The theory illustrates the dynamism of the first 500 million years of the solar system, when powerful collisions rocked the moon and the planets.  The theory means this clast formed about 4 billion years ago, more than 12 miles below the surface of the Earth. An object struck the Earth with such force that it dislodged the clast and expelled it through the emerging atmosphere into space, where it landed on the Moon, which was then three times closer than it is now.

On the Moon, the clast was melded into the larger 14321 by the massive impact force that formed the Imbrium Basin, one of the largest craters known in the solar system. The Imbrium Basin formed when an object a large as 175 mi in diameter collided with the Moon about 3.9 billion years ago. The resulting crater is about 711 mi across, and about 7 mi deep, but was once much deeper, before it was flooded with basaltic lava, forming a nearly flat volcanic plain.

“It is an extraordinary find that helps paint a better picture of early Earth and the bombardment that modified our planet during the dawn of life,” says Dr. David A. Kring, a Universities Space Research Association (USRA) scientist at the Lunar and Planetary Institute (LPI), a member of the research team.

The research is supported by NASA’s Solar System Exploration Research Virtual Institute (SSERVI) through a cooperative agreement with the CLSE, a joint venture between the LPI and NASA’s Johnson Space Center.