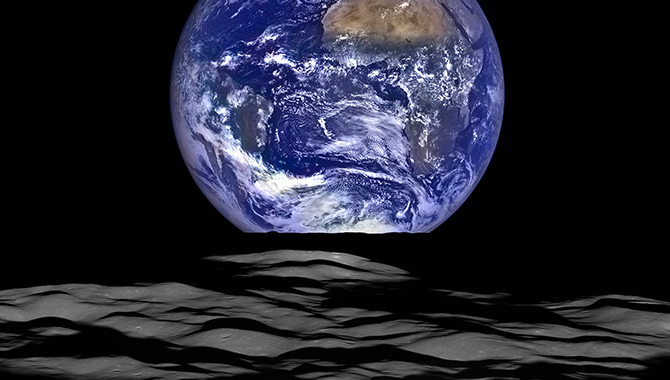 This high-resolution Earthrise image was captured by the LRO and released by NASA in 2015.
Credit: NASA

Mission that began in 2009 recently published research that adds to the understanding of water on the Moon.

As the 50th anniversary of the Apollo Moon landings approach, NASA’s attention is again strongly focused on the Moon. But it’s not only the rich history that has NASA’s attention, but also a bright future. A decade of promising discoveries made by the Lunar Reconnaissance Orbiter (LRO), which has been chronicling the Moon’s surface since the summer of 2009, points to a role the Moon can play in a human mission to Mars.

Recently, members of the LRO team published research about the way water molecules move around the dayside of the Moon. The very idea that there are water molecules on the Moon is relatively new. The Moon was believed to be nearly to completely void of water when the astronauts landed there. Now scientists know there are sparse water molecules bound to the lunar regolith, as well as water ice at the poles.

This new research indicates that as the surface of the Moon warms during lunar noon, the sparse molecules release from the regolith and move until temperatures drop, when the molecules return to the surface. The LRO team used the Lyman Alpha Mapping Project (LAMP) to characterize these lunar hydration changes.

“This is an important new result about lunar water, a hot topic as our nation’s space program returns to a focus on lunar exploration,” said Dr. Kurt Retherford, the principal investigator of the LAMP instrument from Southwest Research Institute in San Antonio, Texas, in a recent NASA press release. “We recently converted the LAMP’s light collection mode to measure reflected signals on the lunar dayside with more precision, allowing us to track more accurately where the water is and how much is present.”

This, coupled with the recent confirmation of water ice on the surface of the Moon’s poles, means a human return to the Moon could possibly be much longer in duration and much more productive.

“This result is an important step in advancing the water story on the Moon and is a result of years of accumulated data from the LRO mission,” said John Keller, LRO deputy project scientist from NASA’s Goddard Space Flight Center in Greenbelt, Maryland. 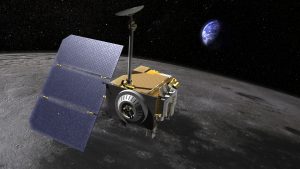 Artist rendering of the Lunar Reconnaissance Orbiter LRO, above the moon.
Credit: NASA/GSFC

The LRO is 152 in. tall and weighed 4,224 pounds when it was launched atop an Atlas V rocket from Launch Complex 41 at Cape Canaveral Air Force Station in the early evening of July 18, 2009. Once in space, its solar array unfolded to a full 168 in. long by 126 in., producing power for the 685-watt spacecraft. The LRO communicates via a high-gain antenna extending out 102 inches.

Technology had advanced so far in the decades after the Apollo missions that NASA actually had more detailed maps of Mars than it did of the Moon when LRO launched in 2009. As a video released by the LRO team at NASA Goddard Space Flight Center illustrates, that is no longer the case.

The video provides sharp, clear images of the Moon’s largest craters, the crucial north pole region, and the Apollo 17 landing site, complete with the descent stage of the Lunar Module (LM) and the Rover the astronauts brought to help them reach greater distances from the LM as they explored.

The LRO carries a suite of seven instruments, key among them the Lunar Reconnaissance Orbiter Camera (LROC), which produces the detailed images NASA will need to select the most advantageous sites for future Moon landings. Images from the LROC also have helped NASA scientists better understand what regions of the Moon are in permanent shadow and what regions are in near-permanent or permanent illumination.

A cosmic ray telescope aboard the LRO is characterizing radiation on and around the Moon coming from the Sun and also deep galactic space. This data is being used to design a new generation of shielding to protect future astronauts. The Diviner Lunar Radiometer Experiment measures temperatures on the surface of the Moon with precision that can inform future surface exploration.

The LAMP has mapped the lunar surface in the far ultraviolet part of the spectrum, searching for ice and frost on the surface of the Moon’s polar regions. It has also provided images from the regions of the Moon that lie permanently in shadow.

As important Apollo mission anniversaries approach, nowhere is NASA’s history and future on the Moon more brilliantly merged than in this video. It was released by the LRO team to mark the 50th anniversary of the dramatic Apollo 8 mission. It vividly reveals the frantic moments as Lunar Module Pilot Bill Anders and Command Module Pilot Jim Lovell searched for color film and prepared to capture the iconic “Earthrise” photograph, which illustrated the dramatic shift in perspective the astronauts were experiencing.

The video mixes LRO data and images with the Apollo 8 crew’s photographs and the audio from the command module to place the viewer in orbit around the Moon as the iconic image was taken.