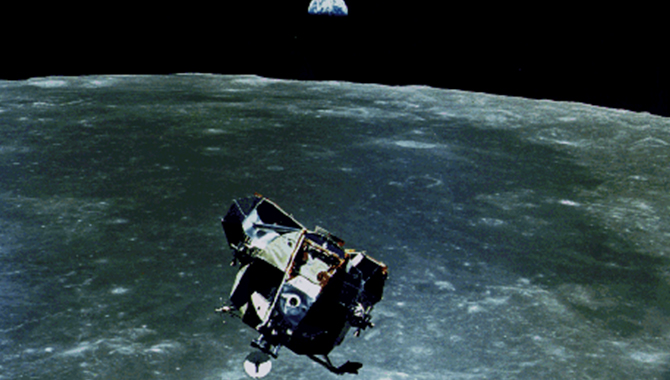 The Apollo 11 Lunar Module, as seen from the Command Module, during rendezvous in lunar orbit following its return from the Moon’s surface.
Credit: NASA

Meeting in 1962 settles key question in race to land on the Moon.

When President John F. Kennedy proposed the national goal of landing humans on the Moon and returning them safely to Earth by the end of the decade, U.S. astronauts had been in space a grand total of 15 minutes and 28 seconds. More importantly, although NASA was studying options for reaching the Moon, there wasn’t consensus within the agency on the best approach among three very different options. Fifty-seven years ago this month, on June 7, 1962, NASA convened an all-day meeting at Marshall Space Flight Center to settle the issue.

“When Kennedy went to the Congress, we were already thinking about all the things that needed to be done,” said Dr. Robert C. Seamans, who was then NASA’s Associate Administrator. “There [was] a long raft of things that had to be considered. One of them was, what would that mode be.”

The most conceptually elegant option considered was direct ascent, which the public was familiar with from science fiction. A large spacecraft atop a booster rocket would be launched on a course for the Moon. That spacecraft would orbit the Moon, land directly on the surface, tail first, and then launch from the surface when the mission was complete and return to Earth.

Direct ascent for a crewed mission required a level of technical sophistication no nation possessed at the time. The U.S. was, however, working on designs for a massive rocket capable of reaching the Moon this way. NASA’s Nova project and the Saturn C-8—which was transferred to NASA by the U.S. Army in 1959—were both designed to have first-stage thrust approaching 12-14 million pound-feet, enough for direct ascent by a crewed spacecraft. 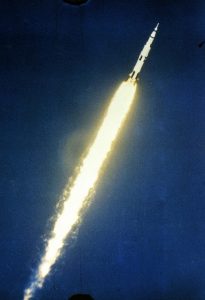 This photograph shows an early moment of the first test flight of the Saturn V vehicle for the Apollo 4 mission, photographed by a ground tracking camera, on the morning of November 9, 1967.
Credit: NASA

The technological challenges of landing a large spacecraft on the Moon and the overwhelming costs of developing the massive rocket required for direct ascent were seen as impossible to surmount on the tight schedule proposed by Kennedy. Two primary alternatives remained—Earth Orbit Rendezvous and Lunar Orbit Rendezvous. Earth Orbit Rendezvous initially was favored by many, including influential aerospace engineer Wernher von Braun, who was then director of the Marshall Space Flight Center.

The Earth Orbit Rendezvous would have used smaller versions of the Saturn rocket already in development to launch components into orbit above the Earth where they would have been assembled into a spacecraft, fueled, and sent to the Moon. This approach would have encouraged the creation of a space station in Earth orbit to serve as an assembly and rendezvous point—a space station that von Braun believed could later be instrumental in a mission to Mars.

“That got us into a lot of trouble when we tried to do it in detail, whether you could take up two packages, each weighing half the amount, and put them together, but have it come out so the packages were sort of neat and tidy, because you can’t take an oxygen tank and cut it in two, for example,” Seamans recalled in an oral history.

“The only way you could do it was to split up the fuel, because the fuel is an awful lot of the weight,” Seamans explained. “That got us into the issues of fueling in orbit. It’s a very difficult thing to do in a vacuum and weightless and all kinds of technical issues that came into it. You’d prefer to have the fuel contained in a can, and then you can put it together with other things and connect some hoses and turn it on, as it were, and not have to pump stuff back and forth.” 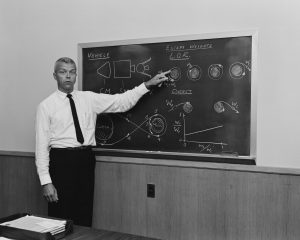 Aerospace engineer John C. Houbolt, who was working at Langley Research Center, was an early, vocal advocate for Lunar Orbit Rendezvous, which was ultimately chosen by NASA. He twice skipped over multiple levels of leadership to write to Seamans about the advantages of the approach. Placing a spacecraft in lunar orbit and then landing a much smaller, purpose-built craft was considerably more efficient. Because the lunar module didn’t require the heavy heat shield to reenter Earth’s atmosphere it could be much lighter, requiring far less fuel.

“You could see … the advantages, they’re easy to understand,” Seamans recalled of one of Houbolt’s presentations. “You can get away with a booster that’s half the size, which is clearly advantageous. There was still another advantage …; namely, that you could design a vehicle specifically for the lunar environment, entirely a vacuum. You don’t have to worry about pressure of air or anything like that. One-sixth gravity when you land, it can be much lighter. More specifically, you can design it so that people can fly it, maneuver it, when it’s coming down. You can get much better visibility from it and so on. But …, it proved to be very difficult to get people to even think about it.”

It’s important to remember that as NASA was weighing these options, the first crewed Mercury flights were just building to the point of orbiting the Earth. Both rendezvous options required precise flight adjustments and docking maneuvers that had never even been attempted. There were stark differences of opinion in the U.S. space program about how difficult a rendezvous might be to perform in space. With Earth Orbit Rendezvous, these maneuvers would have occurred close to Earth, with more options for rescue.

“If you don’t connect, to get across into the landing vehicle [in lunar orbit], [the astronauts are] going to be left … around the Moon forever, or their bodies will be,” Seamans recalled of opposition to Lunar Orbit Rendezvous. “Obviously not a pleasant prospect. But there were so many possibilities… [of failure] that you had to think of all of the risk factors and then try and do something that would minimize all of the risk factors.

One such risk factor was landing a larger spacecraft on the Moon, as required in the Earth Orbit Rendezvous approach. “You didn’t want to have a landing on the Moon and have the vehicle tip over. So, it has men on the moon all right, but they couldn’t lift off from the Moon. There were so many things that could go wrong, that to just single out one of them was a big mistake,” he explained.

In the months leading up to the meeting, more and more prominent engineers began to shift their support to Lunar Orbit Rendezvous as the option most likely to be successful by the end of the decade. By the end of the meeting, NASA leadership was committed to pursuing the option. With the decision made, work could move forward at much faster pace. Over the coming years, the overwhelming success of the Apollo program would come to validate the decision.