Back to Top
Home/INSIGHT/This Month in NASA History: Galileo Begins Journey to Jupiter 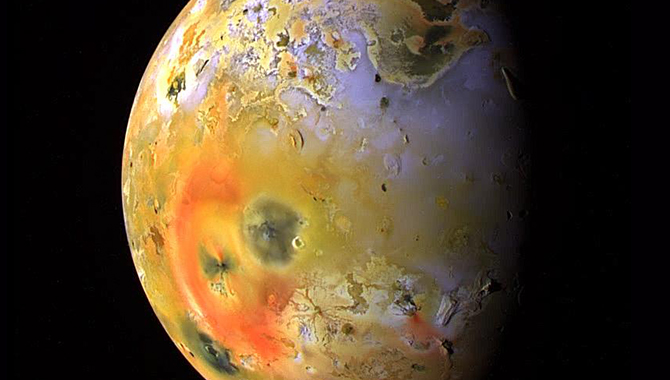 This global view of Jupiter's moon, Io, was obtained during the tenth orbit of Jupiter by NASA's Galileo spacecraft.
Credit: NASA/JPL/University of Arizona

Spacecraft made many important discoveries in 2.8-billion-mile mission.

Thirty years ago this month, the cargo bay doors of Space Shuttle Atlantis opened and the crew deployed Galileo, an approximately 2.5 ton, uncrewed spacecraft bound for Jupiter, a massive gas giant that is one of the brightest objects in the night sky and by far the largest planet orbiting the Sun.

After allowing an hour for Atlantis to reach a safe distance, the Galileo team ignited what is known as Inertial Upper Stage (IUS), a two-stage solid-fueled rocket with 43,000 lbf in the first stage. This sent the spacecraft forward on a 2.8-billion-mile journey that included a series of gravity assists, the first from Venus and the second and third from Earth.

The launch on October 18, 1989 was the culmination of 12 years of development and planning that began in 1977. The spacecraft was originally scheduled to launch in 1982, but a series of delays with the shuttle program and Galileo itself pushed that back. It was also delayed as NASA investigated the Space Shuttle Challenger disaster and made modifications to the shuttle program.

At one time during development, the Galileo team planned to use a United Launch Alliance Centaur-G rocket that was being modified for use in the shuttle’s cargo bay. The 14 ft long, more powerful Centaur—fueled by liquid hydrogen and liquid oxygen—would have enabled Galileo to make a direct ascent to Jupiter. Following the Challenger accident, however, new rules would no longer allow it in the cargo bay. 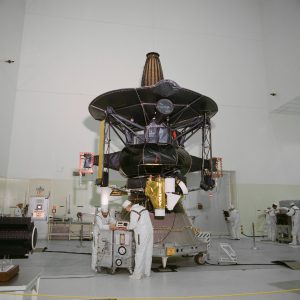 At the Kennedy Space Center’s (KSC’s) Spacecraft and Assembly Encapsulation Facility 2 (SAEF-2), the planetary spacecraft checkout facility, clean-suited technicians work on the Galileo spacecraft prior to moving it to the Vehicle Processing Facility (VPF) for mating with the inertial upper stage (IUS).
Credit: NASA/JSC

The team faced a challenge early in the mission when the high-gain antenna, which was designed as the spacecraft’s main communications link, failed to fully extend. The team tried multiple approaches to free the antenna, including orienting the spacecraft toward the Sun to warm the mechanism, but none corrected the malfunction. Investigators later determined that the lubrication on the umbrella-like mechanism likely degraded during storage as the Challenger accident was investigated and during ground transportation.

This meant that Galileo’s low-gain antenna, which had significantly less capacity, would have to serve as the spacecraft’s main communication link to Earth. NASA made modifications that increased the sensitivity of some of the receivers and antennas in the Deep Space Network to make the low-gain antenna about 10 times more effective in transmitting data.

Galileo returned valuable science to Earth even before it reached Jupiter in December 1995. In 1991, Galileo passed within 1,000 miles of 951 Gaspra, an asteroid about 12 miles long that orbits the Sun in the asteroid belt between Mars and Jupiter. It was the first flyby and imaging of an asteroid. In 1994, it made direct observation of fragments from Comet Shoemaker-Levy 9 as they collided with Jupiter’s atmosphere, also a first.

On the spacecraft’s first gravity assist from Earth, Galileo’s instruments were used in an experiment developed by astronomer Carl Sagan to determine if a spacecraft could observe Earth’s ability to support life from space. These “criteria for life” include plants absorbing light in a portion of the visible spectrum and molecular oxygen, as well certain indications of methane, and modulated radio waves. The experiment was successful. 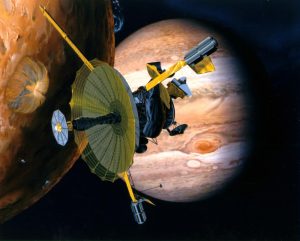 The spacecraft arrived at Jupiter on December 7, 1995 and began the first of 34 orbits, that included flybys of Jupiter’s moons Io, Callisto, Ganymede, Europa and Amalthea. Galileo returned data that led scientists to conclude there is an ocean of liquid water beneath the ice of Europa. The data also indicates that there is likely a layer of liquid saltwater on Ganymede and Callisto.

The mission included many firsts, including the first time a spacecraft on a long-term mission carried a smaller probe designed for immediate entry into the atmosphere. Galileo’s 750-pound probe was about 50 inches in diameter and about 3 ft. tall. The probe observed atmospheric pressure, temperature and chemical composition as it traveled 124 miles in 58 minutes through the harsh atmosphere before being crushed. It also observed the massive thunderstorms that churn in the atmosphere. NASA has successfully used the spacecraft/probe format since, notably the Cassini–Huygens mission to study Saturn.

In its nearly 14-year mission, Galileo greatly expanded scientific understanding of Jupiter and its moons. The team overcame huge challenges to get the spacecraft to Jupiter and to return the data back to Earth.