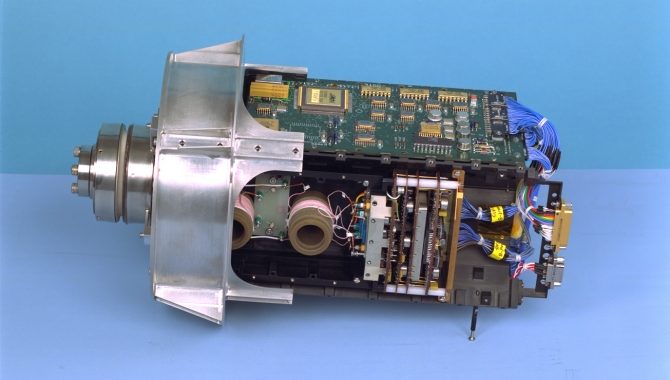 The SEAL instrument, which stands for Surface and Exosphere Alterations by Landers, was built in 1998 as an engineering model for Japan's first interplanetary spacecraft, Nozomi.
Credit: NASA/Goddard Space Flight Center

When the first commercial lunar landers begin delivering science experiments to the surface of the Moon for NASA in the coming years, among the first dozen instruments will be one that has already taken a remarkable, decades-long journey that involves Mars.

The Surface and Exosphere Alterations by Landers (SEAL) experiment will reveal how pristine lunar soils interact with the natural space environment and spent rocket propellant. Understanding how volatiles move through the exosphere of the Moon and how readily they are absorbed and released by the regolith has important implications for future crewed missions to the Moon.

The SEAL experiment employs a Neutral Mass Spectrometer (NMS) built at Goddard Space Flight Center’s Planetary Environment Laboratory. It is what is known as an engineering unit of an NMS that flew aboard the Japan Aerospace Exploration Agency’s Nozomi mission to Mars, launched on July 3, 1998. The Nozomi team planned to use the engineering unit to practice experiments on Earth before attempting them on Mars. However, the mission was terminated following a malfunction, and the NMS was put into storage at Goddard.

“When we decided to reuse this unit for SEAL, our main concern was whether we could successively refurbish and requalify for flight operations hardware that was built 20 years ago,” said Dr. Mehdi Benna, a planetary scientist at Goddard who leads the SEAL team.

The team made significant changes to account for the harsher thermal conditions on the Moon, where temperatures can fluctuate by more than 500 degrees Fahrenheit from day to night.

The first challenge was finding documentation and testing hardware, which included older computers (running vintage DOS operating system), software, and the custom support electronics that command the instrument and decipher its telemetry while on the ground,” Benna said, in written comments to INSIGHT. The team was able to contact and enlist key members from the Nozomi/NMS team on the SEAL project. Their expertise with the NMS instrument enabled the SEAL team to complete the renovation on an aggressive schedule.

“We had to reevaluate the electronic boards, replace all parts that may have suffered degradation and requalify through testing the full electrical system. The sensor had to be disassembled and rebuilt as new to ensure that the instrument delivered the high performance of its original days,” Benna said.

The SEAL instrument will operate in much different conditions than the NMS was originally designed for on Mars. The team made significant changes to account for the harsher thermal conditions on the Moon, where temperatures can fluctuate by more than 500 degrees Fahrenheit from day to night. The team also retrofit the instrument with a dust cover to protect it from fine lunar particles blown by the lander’s exhaust.

One of the Commercial Lunar Payload Services landers will deliver SEAL to the surface of the Moon, mounted on the bottom of a payload deck. SEAL will operate during descent, measuring the composition of the exhaust gases and will detect any gases that might be released from the lunar soil following landing.

“The instrument will be tasked with characterizing regolith outgassing in the days following exposure to the lander’s exhaust gases and collect valuable data on how pristine regolith interacts with volatile species such as N2, H2, NH3, H2O, CO, and hydrocarbons,” Benna said. This data will enable scientists to improve computer models of the surface-exosphere interface and water migration through the exosphere.

Benna expects exhaust gases will move laterally through the exosphere of the Moon for days after landing. Those exhaust molecules that are captured by the lunar soil during landing are expected to remain there for longer, being released eventually as temperature conditions on the lunar surface change.

Benna notes that although research into the reactivity of volatile gases with lunar soils isn’t new, the research to date has been performed on Apollo samples after they had arrived on Earth. The mechanics of sampling the soils, coupled with any terrestrial contamination, might have impacted those results. SEAL will examine the interactions in place.

“By looking at how the soil interacts with spent rocket propellant, SEAL will, in effect, use future landing opportunities as a large-scale, controlled experiments of regolith-volatile interactions. And the information that can be garnered from these observations is beyond what can be traditionally achieved by experiments conducted in laboratory settings,” Benna said.

Results from the SEAL experiment will enhance scientific understanding of the capabilities of lunar regolith to store and release volatiles on the Moon. This knowledge will be instrumental in determining to what extent a crewed mission to the Moon might be able to utilize in situ resources for a sustained presence on the lunar surface.