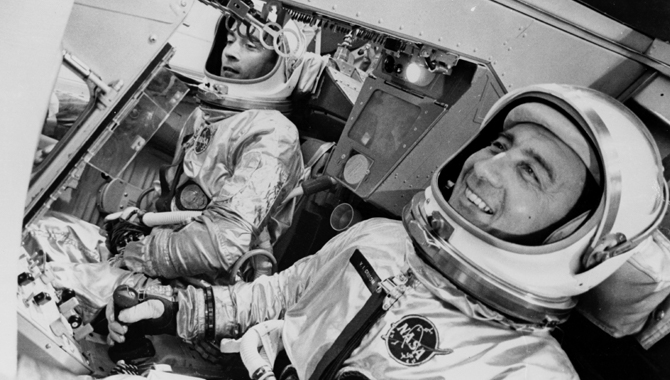 On the first crewed Gemini flight, Gemini III, John W. Young, left, smuggled a corned beef on rye sandwich into the capsule and briefly shared it with Virgil I. “Gus” Grissom. NASA soon developed technology that improved the freeze-drying process to improve the quality of food on long spaceflights.
Credit: NASA/MSFC archives

Although NASA develops technology to push the envelope of aeronautics or explore the distant reaches of the Moon, the Sun, Mars, and beyond, much of that technology is shared with companies who ultimately use it to improve daily life for the public in many ways, from making commercial air travel safer to keeping doctors connected to their recently discharged patients.

Recently NASA published a new issue of Spinoff, an annual publication detailing some of the most interesting examples of NASA technologies that have been adapted to improve everyday life. This issue includes an impressive array of technologies, including an Apollo-era insulation still prized today, monitoring technology that improves community health, and a company who uses NASA advances in freeze-drying to create an inspirational treat.

“Technology is a means to an end. But sometimes there are more ends than anticipated, and the technology created for one purpose here at NASA finds new life in applications for U.S. industry and daily life,” said Daniel Lockney, executive of NASA’s Technology Transfer program, in a NASA press release. “As a result, NASA technology doesn’t just improve quality of life on the ground – it also creates jobs, saves money and even saves lives.”

As NASA prepares to return to the Moon by 2024 and go on to Mars, Peggy A. Whitson holds the record for longest total time an American has spent in space—665 days. At the dawn of the space age, however, scientists weren’t certain that humans could focus their eyes effectively in space, or even swallow food. NASA quickly began to develop the first telemetric health monitoring devices, which could send data on an astronaut’s temperature, heart rate, blood pressure, and breathing patterns to mission control during a mission, to track the effects of spaceflight on the human body. 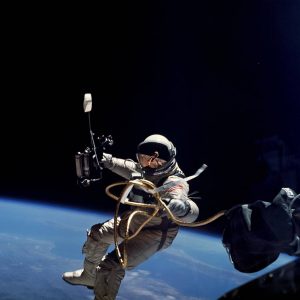 Developing these systems was an enormous engineering challenge because their components had to be small, lightweight, and function reliably in the challenging environment of space. That task fell to a company called Spacelabs, formed by engineers James Reeves and Ben Ettelson. The technology they developed in working with NASA was used to monitor Ed White as he became the first American to walk in space on June 3, 1965. It monitored Neil Armstrong and Edwin “Buzz” Aldrin four years later when they became the first humans to step onto the surface of the Moon.

For decades, the company, now known as Spacelabs Healthcare, has built on that legacy of innovation that began in partnership with NASA.  The company’s devices are now smaller and even more portable, traveling with a patient from room to room in a hospital and finally home, where they can provide healthcare professionals with instant, remote access to a patient’s ECG and blood pressure results. This enables healthcare providers to distinguish issues that require changes in medication from those that require an expensive and disruptive return to the hospital, reducing costs and speeding recovery.

About 90 percent of commercial airliners in the western world contain a fire-resistant material known as Solimide, an evolution of the polyimide foam technology NASA developed for Apollo and Skylab. Solimide was designed as an exceptionally light-weight, high-performance thermal and acoustic insulator, with minimum outgassing.

Following several fatal commercial airliner accidents that were made far more lethal by ensuing fires and clouds of toxic smoke, NASA worked jointly with the Federal Aviation Administration and aviation industry firms to advance polyimide foam as a potential means to make air travel safer. Because the foam was both delicate and expensive to manufacture, it took years of research and modifications to arrive at a product for public use.

Today, Solimide is produced by the Boyd Corporation, and can be found in most commercial aircraft as fuselage insulation, galleys, doors, ceilings, and more. It is also still highly prized in the space industry, where its ability to perform across a temperature range of more than 800 °F gives it a wide range of applications. It is an important component in ship building, as well. 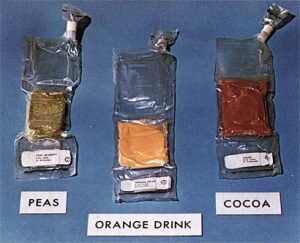 When John Glenn became the first American to orbit the Earth, he took with him applesauce and pureed beef in containers similar to toothpaste tubes, primarily to test if the human digestion system would work in space. By Gemini III, the quality of the food came into sharp focus when John W. Young smuggled a corned beef sandwich onto the capsule and shared it with Virgil I. “Gus” Grissom during the mission. The astronauts enjoyed the first bites of the sandwich, but quickly stowed the rest of it as crumbs from the rye bread began to float before them and the cabin filled with the smell of corned beef.

To answer the challenge of nutritious, palatable, light-weight food, NASA, working with the Army Natick Laboratories, developed technology to improve the process of freeze-drying. The method cut reconstitution time in half, improved efficiency, and worked effectively with cool water. This led to a line of palatable gravies that eventually evolved to include shrimp cocktail, fried rice, and fettuccine alfredo.

The NASA improvements in freeze-drying are now the industry standard, capable of removing 99 percent of water from a meal. The technology is still used to prepare food for astronauts in space, but is also widely used to supply military personnel, campers, hikers, and in other situations where food that is light weight and has a 30-year shelf life are beneficial. For more than 40 years, it has been on display in the form of freeze-dried ice cream and ice cream sandwiches, a product first created by American Outdoor Products at the request of the visitor’s center at Ames Research Center, as an enjoyable way for the public to experience “astronaut food.” It is now available at more than 1,000 retailers, serving three generations of consumers.