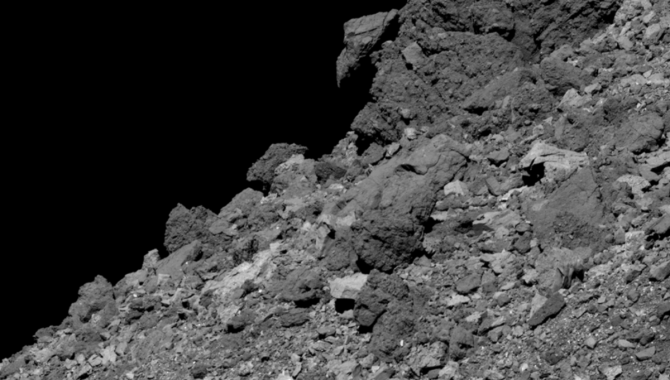 Researchers are learning more about the surprisingly rugged surface of the asteroid Bennu, which is covered with boulders and has defied expectations.
Credit: NASA/Goddard/University of Arizona

New surprises from smallest object NASA has ever orbited.

The asteroid Bennu was discovered in 1999 by the Lincoln Near-Earth Asteroid Research project, a likely more than 4.5-billion-year-old artifact of the early chaos in our solar system. At 1,614 ft. in diameter, the carbon-rich asteroid is probably a shattered remnant from a much larger body that broke into pieces during a violent collision in the main asteroid belt as much as 2 billion years ago.

In the past 23 years, Bennu has rapidly become one of the most well-documented of the more than 1.1 million known asteroids. Researchers have observed Bennu from great distances with telescopes on Earth and in space and from very close with the instruments aboard OSIRIS-REx, a spacecraft that orbited the asteroid for more than two years, gathering data before and after a maneuver to collect a sample from the surface.

This series of images shows the SamCam field of view as NASA’s OSIRIS-REx spacecraft approaches and touches asteroid Bennu’s surface with a robotic sampling arm.
Credit: NASA/Goddard/University of Arizona

Bennu is the smallest object a NASA spacecraft has ever orbited, and it has held big surprises at every turn, expanding scientific understanding about what are known as “rubble-pile” asteroids. The surprises began when OSIRIS-REx arrived at Bennu and the first images revealed a much more rugged surface than expected, marked with massive rocks, some as large as 72 feet. Expecting to find large areas of fine-grained material instead, the team was prepared for a target collection site 164 ft. in diameter. Unable to find an unobstructed site close to that size, the team chose a site about one-tenth the original target size, which required greater precision during the collection maneuver.

In the fall of 2023, the OSIRIS-REx Sample Return Capsule will streak into Earth’s atmosphere bound for the deserts of Utah, protected by a heat shield and parachutes. The capsule contains a container filled with surface material from Bennu. And although that pivotal phase of the mission is still more than a year away, recently published research reveals the team is already learning a great deal about Bennu.

Much of the research focuses on Bennu’s surface, which was well documented by the spacecraft’s cameras, including one on the OSIRIS-REx sampling arm. A team led by the Southwest Research Institute recently published a paper in the journal Science Advances that describes the characteristics of the rocky surface based on images and observations during and following the collection maneuver.

“Here, we find that the forces measured by the spacecraft are best modeled as a granular bed with near-zero cohesion that is half as dense as the bulk asteroid,” the team wrote.

“The low gravity of rubble-pile asteroids such as Bennu weakens its near-subsurface by not compressing the upper layers, minimizing the influence of particle cohesion,” said SwRI’s Dr. Kevin Walsh, lead author of the paper, in a SwRI press release. “We conclude that a low-density, weakly bound subsurface layer should be a global property of Bennu, not just localized to the contact point.”

Earlier this year, a team published research in the journal Nature Geoscience in which they examined images of an impact crater about 230 ft. in diameter on Bennu, the ejecta, and a downslope avalanche, finding that the images suggest surface strength that is four orders of magnitude below surface strength estimates commonly used for asteroid surfaces. Bennu’s surface strength, however, is consistent with observations by the Japan Aerospace Exploration Agency spacecraft Hayabusa2 at another rubble-pile asteroid, Ryugu.

Another team publishing in Nature Geoscience examined the dimensions of 1,560 craters on Bennu, noting that smaller craters are relatively rare, perhaps because the asteroid’s rocky surface armors it from the effects of smaller impacts. The team also found evidence that the larger craters on Bennu are much younger—between 10 and 65 million years old—than previously estimated. The team concludes that the asteroid’s overall surface age is more than 15 times more recent than original estimates and that surface changes occur more frequently.

Extreme temperature changes are also impacting Bennu’s surface. The asteroid rotates on its axis every 4.3 hours. The temperatures on the surface vary from -99.67 °Fahrenheit on the dark side to 170.33 °F on the side facing the Sun. These large diurnal temperature variations stress the rocks and boulders on the asteroid’s surface, a team reports in Nature Geoscience.  The team proposes that the boulders fracture under this stress, leading to relatively rapid surface evolution.

Together, the research suggests the beginning of a new understanding of asteroids such as Bennu, at their core artifacts from the early solar system, but with surfaces that evolve over tens of thousands—not millions—of years, driven in part by the effects of weak gravity and harsh, rapid temperature changes.

“OSIRIS-REx’s many accomplishments demonstrated the daring and innovative way in which exploration unfolds in real-time,” said Thomas Zurbuchen, Associate Administrator for the Science Mission Directorate, in a NASA press release. “We have a primordial piece of our solar system headed back to Earth where many generations of researchers can unlock its secrets.”

For a visual tour of Bennu rocky surface, click here.