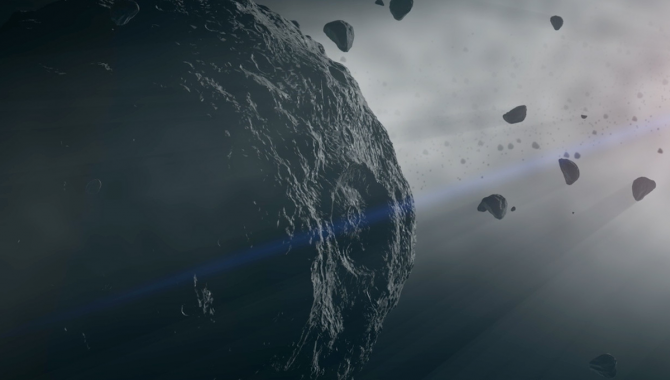 A team led by NASA researchers was able to use data from the more than two years OSIRIS-REx spent examining Bennu to model the asteroid’s orbital trajectory with unprecedented precision through 2300.
Credit: NASA

The OSIRIS-REx spacecraft isn’t due to deliver a sample of the asteroid Bennu to Earth until September 2023, but the mission has already yielded a treasure trove of scientific information, including data that enabled a team led by NASA researchers to calculate Bennu’s distance from the Earth within two meters and model its orbital trajectory with unprecedented precision through 2300. The research was published recently in the journal Icarus.

Bennu was discovered in 1999 by the Lincoln Near-Earth Asteroid Research project, a joint effort of NASA, the United States Air Force, and the MIT’s Lincoln Laboratory. Bennu has a diameter of about 1,587 ft and is considered a potentially hazardous object. The measurements taken on this mission support calculations about the asteroid’s trajectory and potential to pass through a gravitational keyhole.

“The trajectory of the spacecraft was really amazing. I compare it to a hummingbird.”

Although technically the impact probability went up, it’s not a significant change, according to Davide Farnocchia, lead author of the research paper, Ephemeris and hazard assessment for near-Earth asteroid (101955) Bennu based on OSIRIS-REx data. Farnocchia is a scientist with the Center for Near Earth Object Studies (CNEOS) at NASA’s Jet Propulsion Laboratory in Southern California.

“The end product probability’s pretty much the same. We actually now have a much better knowledge of the Bennu trajectory, and we can better constrain what the possible pathways to impact are. I think overall the situation has improved and I’m not any more concerned about Bennu than I was before,” said Farnocchia, speaking at a NASA press conference.

After Bennu was selected as the target of the OSIRIS-REx mission, understanding its orbital trajectory centuries into the future, and updating the impact hazard assessment accordingly became a primary mission objective, according to Dante Lauretta, the OSIRIS-REx principal investigator, and a co-author of the research paper.

“We spent two years studying this asteroid,” Lauretta said at the press conference. “The trajectory of the spacecraft was really amazing. I compare it to a hummingbird. We were able to go into orbit, we were able to leave orbit, we could get to a variety of imaging angles so that the sunlight was either casting long shadows or casting no shadows depending on the scientific measurement that we were making.”

Modeling Bennu’s future orbital trajectory is a complex process that begins with a precise understanding of where OSIRIS-REx was during those intricate maneuvers, and accounts for gravitational keyholes and a thermal process known as the Yarkovsky Effect, while considering the potential impact of many other variables, such as plumes of particles the asteroid was observed ejecting multiple times.

During the mission, the team communicated with the spacecraft through NASA’s Deep Space Network, sending and receiving signals. The time it takes these signals to travel are measured within nanoseconds and that gave the team a very good understanding of how far the spacecraft was from Earth.  The spacecraft’s instruments pinpointed Bennu’s distance from OSIRIS-REx within a meter.

“So, if you combine these pieces of information, you can work out the distance between the Earth and Bennu,” Farnocchia said. But to accurately model Bennu’s future trajectory, more was needed—a precise measurement of the asteroid’s mass and thermal properties. Those are key to modeling the Yarkovsky effect, named for 19th Century civil engineer Ivan Osipovich Yarkovsky who first theorized the effect heating and cooling could have on the movement of small objects traveling through space.

“The Yarkovsky effect is due to sunlight reaching the asteroid and warming up its dayside,” Farnocchia explained. “As the asteroid is rotating, the nightside cools down and the heat gets released. And that causes a gentle push on the asteroid. The Yarkovsky effect acting on Bennu is equivalent to the weight of three grapes. And that’s what’s really driving the motion Bennu to the future because this acceleration is persistent, its effect builds up over time, and it becomes very significant by the time we get to 2135.”

September 2135 is a key point in the research because, although there’s no possibility that Bennu will impact the Earth then, it will pass within about half the distance to the Moon, close enough to change the asteroid’s trajectory.  “And in order to know the trajectory after the encounter, you really need to know the position of Bennu right before the encounter, so you can model how the gravity is going to perturb the motion of Bennu,” Farnocchia said.

Captured by the spacecraft’s SamCam camera on Oct. 22, 2020, this series of three images shows that the sampler head on NASA’s OSIRIS-REx spacecraft is full of rocks and dust collected from the surface of the asteroid Bennu.
Credit: NASA

The OSIRIS-REx mission has increased scientific knowledge of that 2135 encounter by a factor of 20. And that enables researchers to rule out the vast majority of gravitational keyholes the asteroid could have passed through to put it on a collision course with Earth. Now, only two significant keyholes remain as possibilities.

Although there is a 99.94 percent probability that Bennu is not on an impact trajectory, the OSIRIS-REx mission has provided detailed data about the size and structure of the asteroid that can be compared with earlier observations made from Earth to refine those remote observations and apply that knowledge to other asteroids.

“The OSIRIS-REx mission has provided exquisitely precise data on Bennu’s position and motion through space to a level never captured before on any asteroid. Not only does this allow us to better understand Bennu’s future path, and if it ever could be an impact threat to the Earth, but also allows us to test and improve the… modeling techniques that we can use on all Near-Earth Asteroids,” said Lindley Johnson, planetary defense officer at NASA’s Planetary Defense Coordination Office at NASA Headquarters in Washington.

Meanwhile, nearly four months after leaving Bennu, the mission is on track, with the spacecraft on a trajectory that will intersect with Earth on September 24, 2023, when OSIRIS-REx’s Sample Return Capsule, complete with a heat shield and parachutes, will land in the Utah desert.

To learn more about the OSIRIS-REx mission, listen Episode 63 of the Small Steps, Giant Leaps podcast.