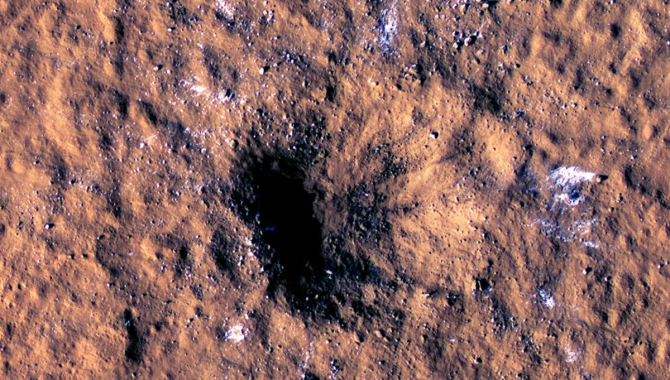 A meteoroid slammed into the surface of Mars on December 24, 2021, leaving this massive crater and ejecting boulders of water ice across a wide area. In the months that followed, two NASA teams pieced together what the impact was and what it reveals about the planet’s crust.
Credit: NASA/JPL-Caltech/University of Arizona

On December 24, 2021, a meteoroid between 16 to 39 feet across streaked through the thin Martian atmosphere and collided violently with the surface. It would take two NASA teams several months to piece together exactly what happened and how extraordinary it was.

The ground shook with such force following the impact that NASA’s InSight Lander—more than 2,000 miles away—registered it as a magnitude 4 quake. This makes it one of the strongest of the more than 1,300 quakes InSight has recorded on Mars. The seismic waves that reached InSight’s seismometer were unusually large and shallow, traveling through the outer crust for the first time. And they didn’t originate from Cerberus Fossae, the seismically active region from which many previous quakes could be traced.

A crucial piece of the puzzle was provided by the team of the Mars Reconnaissance Orbiter (MRO) in early 2022. 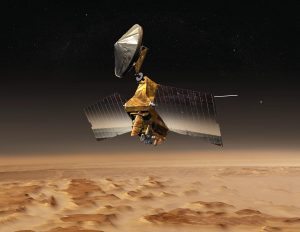 MRO examines Mars with multiple cameras, including the High Resolution Imaging Science Experiment (HiRISE) camera, which provides precision images of small features, such as craters, gullies, and debris layers. HiRISE works in concert with the Context Camera (CTX), which provides the wide area views that put the detailed images into context. The team compares new CTX images to previous ones and notes changes to the surface. Liliya Posiolova, the orbital science operations lead on the MRO team, was examining images from CTX when she spotted something surprising.

“When we first saw this image, we were extremely excited,” Posiolova explained at a recent NASA press conference, displaying an image of a massive new crater on Mars. “This was nothing like we’ve seen before. It took [the] entire view of the CTX image—it’s a 30 kilometers width—and we [even] needed to take two more images of the site to capture the entire perturbance area.” 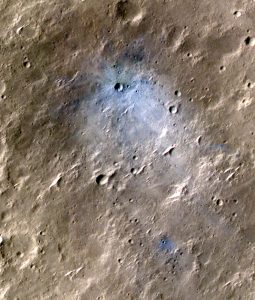 NASA’s Mars Reconnaissance Orbiter captured this image of a meteoroid impact that was later associated with a seismic event detected by the agency’s InSight lander using its seismometer. This crater was formed on May 27, 2020.
Credit: NASA/JPL

Typically, a new crater on Mars appears as “a little smudge” on a CTX image, Posiolova said. The MRO team has been looking for new craters on Mars for 16 years, identifying more than 1,200 of them. This one stood in stark contrast to previous craters. The team pointed the HiRISE camera at it for details.

“…It was immediately clear that this is the biggest new crater we’d ever seen. It’s about 500 feet wide, about two city blocks across,” said Ingrid Daubar, InSight impact science lead. “…Even though meteorites are hitting the planet all the time, this crater is more than 10 times larger than the typical new craters we see forming on Mars.”

“We thought a crater this size might form somewhere on the planet once every few decades, maybe once a generation, so it was very exciting to be able to witness this event. And to be lucky enough that it happened while InSight was recording seismic data, that was a real scientific gift,” Daubar added.

By pairing data about the impact from MRO with data about the seismic waves detected by InSight, the team hopes to not only learn more about craters and the crater formation process on Mars, but also about the interior structure of the planet. Because there is data about the origin, likely force, and distance of this impact, it can help the team better understand previous InSight data from earlier quakes where the exact epicenter is unknown.

“Surface waves were something that we had anticipated using in our data analysis, from the very beginning of our planning,” said InSight’s Principal Investigator, Bruce Banerdt, speaking at the press conference. The team thought that surface waves would help them locate quakes and understand the structure of the Martian crust, but they were not observed for the first three years of the mission. 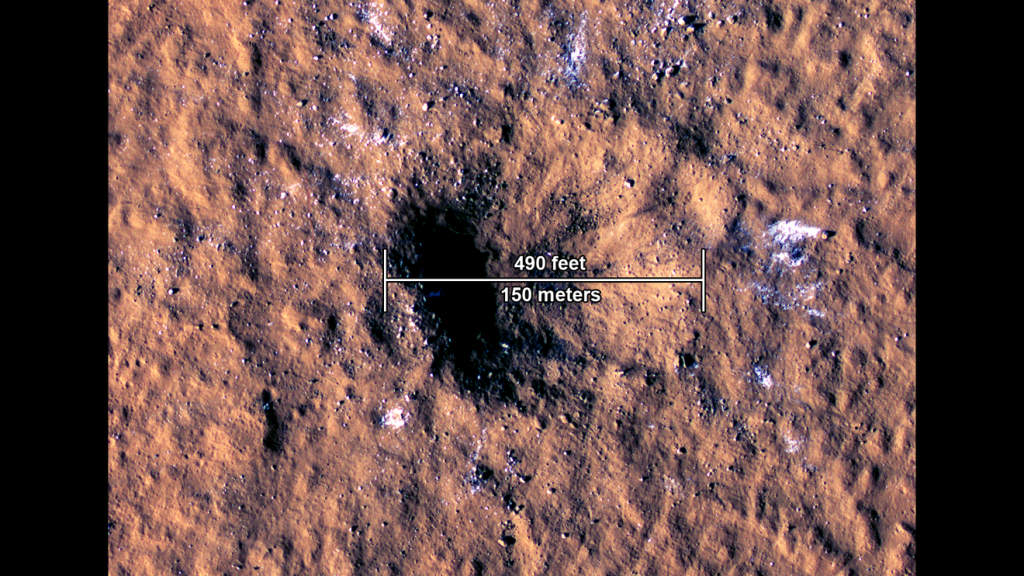 The impact, in a region called Amazonis Planitia, blasted a crater roughly 492 feet (150 meters) across and 70 feet (21 meters) deep.
Credit: NASA/JPL-Caltech/University of Arizona

The impact revealed another surprise. The meteoroid ejected boulders of ice from beneath the surface, tossing them widely over the area.

“This was surprising, because this is the warmest spot on Mars—the closest to the equator we’ve ever seen water ice. So, scientists are going to be able to use this to constrain the past climate conditions on Mars, when and how this ice was deposited, buried, and preserved up until now. This is a huge opportunity to study a really large impact event from both the orbit and the ground, a reminder of how privileged we are to have multiple missions studying Mars at the same time,” Dauber said.

After the InSight team identified the seismic signature of a large impact on Mars, they recognized that pattern again in InSight’s records of earlier quakes. Using this date, the MRO team reviewed images and found a second significant impact crater. InSight and MRO have returned valuable data that will be studied for decades to come as scientists seek a better understanding of Mars. To learn more about NASA’s missions at Mars, click here.