When I first started working for the Air Force, I had a hard time understanding how we make our source selections.

We hand the contractors a request for proposal (RFP), and we don’t talk to them a lot after that. They come back and hand us their proposal; we take it and evaluate it. We write down what we think is wrong with the proposal — again, we don’t talk to them — and, after they review our comments, they hand us back a written response.

After one of these exchanges, I asked a contracting officer, “Well, why can’t we just ask them questions?”

He said, “Oh, no, you can’t do that. You might ask the wrong question.”

Think about it. When we go out to buy a car, we would never hand over a sealed bid and pass information back and forth in writing without asking the salesman a few questions about features or the way the car handles. Not asking questions when we’re buying something that’s never been built before seems even more ludicrous to me. After source selection, we ask questions, and the contractors answer us. We do this on a daily basis — so, why would we do anything differently during source selections when such openness could be of tremendous benefit to the project?

When you start sorting through all these layers you realize there really aren’t a whole lot of rules there. We’ve put these constraints on ourselves.

Doing things differently
When I finally got a program of my own to manage, the Small Diameter Bomb (SDB), I decided I wanted to do things differently. At this point, I had already been on one program that attempted to do source selections differently — including using oral presentations to allow contractors to make their proposals. Unfortunately, we had to make so many concessions to appease the contracting officer, who worried about a protest and the resulting political fallout, that doing things differently added very little value.

I had no stomach for revisiting that argument again, but on SDB I put forward an acquisition strategy that was much more aggressive in schedule than any of our weapons systems that we had fielded from scratch. Integral to my acquisition strategy was to get through source selection very quickly. In order to do that, we had to change the way we did business.

When I started to brief management on my strategy, I decided to be straightforward about my intention to do an open source selection with real time discussions. I had a bullet on one of my slides that said:

I thought, well, if I can sell it to the head of contracting, I’m probably safe. During my brief, I watched his face to see if he cringed. No reaction. I stood there for a few seconds more.

He said, “I understand you.” 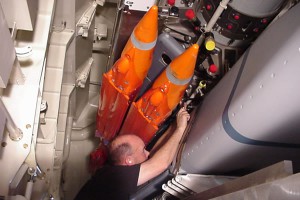 A technician mounts the Small Diameter Bomb for deployment.

I usually don’t ask permission, I just ask forgiveness, as the saying goes — but in this case I couldn’t believe my ears. I said, “So, you don’t think anyone is going to have a problem with this?” He said, “No. Go ahead. Try it. Let us know how it works.”

I thought, declare victory, uncork the champagne; but that was somewhat premature.

Next stop was our industry partners. I thought they were going to love this. All I’ve ever heard from them is, “Government never communicates what it really wants in an RFP.”

So, I told them this: “There will be no big written volumes that you have to submit, not even for costs. Everything is going to be done orally, the same way that you do business with us every day after source selection. We’re going to sit in a room together and we’re going to hash things out until we understand one another. Then we’re going to give you your evaluation. We’ll tell you everything along the way.”

I wasn’t ready for their reaction. They started shifting in their seats and looked uncomfortable. I said, “Well, what’s wrong? You’ve always said that we don’t communicate well in our RFPs.”

A vice president of one of the companies said, “What if one of my guys screws up and says the wrong thing?”

“You will have the right to strike anything from the record you don’t want,” I said.

They still didn’t know if they liked it. We listened to a lot of “what-ifs.” Finally, I said, “I hear your concerns. I understand them. I’ll take full responsibility for this if it doesn’t work out.”

Straight speak
First, we did a dry run. Each of the three contractors competing for the award had the opportunity to give an eight-hour briefing, just as they would when the stakes were for real. Ultimately, the contract we signed was going to be based on their updated briefing charts.

In the dry run, we gave them candid feedback. We told them what we thought they had done wrong, what they misunderstood in the RFP, and they were then able to say to us, “When you said in your RFP this statement, that’s what it meant to us.”

We said, “Well then, how can we modify our RFP so you understand what we mean?” And they told us.

There were two things we got out of that. Number one, the contractors better understood what we were asking for. Number two, we understood better how they were interpreting our RFP, so that we could clarify our document.

We gave them their feedback and said, “Here is where we think you are. Here is what we rank you as of right now.” They had the opportunity to say, “We disagree with you.” We did change some scores based on information that we got. Sometimes we upgraded them. One time we actually downgraded a contractor.

Some said, “I still think you don’t understand; you got it wrong, and I think I should have a better score than you gave me.” As part of the dry runs, we allowed them to appeal to the source selection authority and gave them the opportunity to tell their side of the story. The source selection authority was able to ask questions and uncover details about what we had done and why we had done it. Ultimately, as a result of that process, some of the scores did change. It didn’t change the overall outcome of the source selection, but the contractors felt that they had been heard.

Doing the dry runs made the contractors feel a lot more comfortable. When it came time to hold the official oral presentations, no one complained that the process was unfair. No one protested.

Afterwards, I called up some of the contractors who weren’t selected and asked, “Well, are you going to ask for your day in court with the source selection authority?” They all said no. The process was fair, they agreed.

Doing a source selection this way isn’t just about saving time and killing fewer trees; I chose to use this approach in part because I like to talk to people and look them in the eye. It goes with my straight-speak approach to project management. I’ll tell you exactly what I’m thinking, and I expect you to do the same. It sets the tone for the kind of relationship I want to have with my contractors after the selection, and I think it has an impact on results, too. Communication is the key to success; so why wait to get the talking started?

Lynda Rutledge was an Air Force systems engineer on the Joint Air-to-Surface Standoff Missile (JASSM) during the source selection phase. After leaving JASSM, she managed the concept exploration and planning of the program that is now the Small Diameter Bomb (SDB). She is currently Deputy Director in the Precision Strike System Program Office within the Armament Product Group at Eglin Air Force Base, Florida.