As Associate Administrator for Space Flight at NASA, William Readdy has spent much of the last year addressing Agency plans for future Shuttle missions in the wake of the Columbia accident. But Readdy’s connection to the Shuttle dates back much farther. A member of the astronaut corps since 1987, he has logged 672 hours in space on three Shuttle missions (STS-42, STS-51, and STS-79).

Readdy graduated from the United States Naval Academy in 1974. After eleven years service as a naval aviator and test pilot, he joined NASA in 1986 as a research pilot. His technical assignments to date have included Training and Safety Officer, Orbiter project staff; NASA Director of Operations in Star City, Russia; and Space Shuttle Program Development Manager.

In addition to your current work, you remain a member of the astronaut corps. Clearly, the loss of the Columbia hit close to home for you. Has it been difficult to listen to the criticism aimed at NASA in the wake of Columbia?
Faced with a situation like this, you can either be defensive or you can be receptive. Maybe all of the input that you’ll get won’t be exactly correct, but if you focus on what’s not perfect in what you’re hearing, then you don’t learn. We (NASA) need to learn from this experience. Even bad situations like this one can be good learning experiences.

If there’s one thing that I’ve learned from STS-107, it’s that when you get too pleased with how you’re doing, that’s when you really need to start feeling uncomfortable that you’re missing something.

When you addressed the Return to Flight team last year, you emphasized the importance of forging new leadership for NASA’s space flight missions. How have you set out to accomplish that?
The first thing I tried to do was to articulate those qualities, those attributes that I wanted in our leadership. One of the things that I realized was that I wanted someone with broad experience to manage the Shuttle program. At the very top of the list of what I was looking for — in addition to the broad background — had to be the leadership, the integrity, and the people skills to be able to manage a program across all of the different populations of projects, programs, Centers, and contractors.

At the end of the day, my selection was Bill Parsons — not your traditional mold of someone who has gone up through the project management ranks, or someone who has been brought up in engineering or in mission operations, but somebody with a very broad background ideally suited to fit this position. I’m not saying that there was only one single person in the whole Western Hemisphere who could do the job. There were other people with those skills — but many of them absolutely had to stay in their current positions because they were essential to other aspects of Return to Flight. They had such unique skill sets; we couldn’t move them without causing other dominos to fall.

If there’s one thing that I’ve learned from STS-107, it’s that when you get too pleased with how you’re doing, that’s when you really need to start feeling uncomfortable that you’re missing something.

How did the project community receive your selection?
I have to tell you that there were a lot of people who were blown away by the selection, because it was so far “outside the box.” It wasn’t a traditional selection. There were a number of different considerations that went into all the selections I have made post-Columbia. I think that points to a couple of things. One is that before you get into thinking about who you want to fill a position, you need to be thinking about what skill set, what attributes, what qualities you’re looking for.

An experience like this must force you to reflect on your own responsibility as a leader. It’s not just a matter of what NASA needs to do, but what does William Readdy need to do?
The thing to do is to use the people around you as sounding boards. When you’re grappling with a problem, the first assumption you have to make is that your problem is not completely unique. That people have dealt with similar problems before — maybe not in your organization, but in another organization, in another company, in another place — maybe another time.

I don’t hesitate to ask for advice. I seek out mentors. Sometimes it’s people that have dealt with the same problem. Usually, older, wiser people, but not always. Sometimes it’s mentors in the form of books. If you take a look at my library, you won’t find a lot of program management books. An awful lot of the books I read are by people like Ben Franklin and Theodore Roosevelt. There is a book, Lincoln on Leadership; it’s a spectacular book that I’ve gotten a lot of insight from. We’re experiencing some of the same problems that Lincoln had with his leaders. People haven’t changed fundamentally, and they’ve been solving problems since time immemorial.

Again, the first thing to understand is that your problem is probably not totally unique, no matter what the problem. As tragic and horrific on an Agency and personal level as STS-107 was, it was not absolutely unique, in terms of how to deal with it.

Did you always want to work for NASA? Is your interest in space exploration something that dates back to when you were a child? 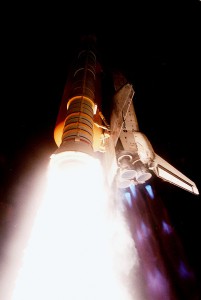 The Space Shuttle Atlantis (STS-79) roars into the night on liftoff, September 16, 1996. Leading the crew is Commander William Readdy.

It started in third grade, listening to John Glenn’s flight on the public address system in my school. We were all in the cafeteria listening. I wasn’t paying attention. My teacher whacked me on the knuckles and told me to pay attention; she told me that this was really important stuff.

I started paying attention. During the Apollo years, I followed every single one of those missions down in my basement watching on the TV and following the news.

What did you hear in that John Glenn broadcast after you got your knuckles rapped? What captured your imagination?
Actually, I think it was the attention I got from the teacher.

On top of that, I remember even at the time being aware that there was real drama associated with the flight, and not just the excitement of the liftoff, but every part of it. It was just something that made a big impression at the time. Eventually, many years later, I got to meet John Glenn.

So you were hooked on space flight?
After Apollo, there was a hiatus. By that time, I was starting to fly in the Navy, and I guess I lost track of what was happening in space.

I just wasn’t paying much attention at all to NASA, except that I remember some of the Shuttle development work — hearing about people flying the approach and landing tests. I remember thinking that was a dream job for a test pilot.

Eventually, I became a Navy test pilot myself. The first thing they did was to take us down to the Johnson Space Center as they were preparing for the STS-1 mission. I knew then that was something that I had to do.

What do you consider your biggest challenge now at this stage of your career as Associate Administrator? What gets you passionate now?
I think it’s still our missions. The missions that we do are so special. Take human space flight or Shuttle, for example. There is a tendency, certainly in this town and elsewhere, as well, to view this kind of work as been there, done-that, got-the-T-shirt work.

I think that most of that evaporated on the morning of February 1, 2003 when people realized this is really tough stuff. There was nothing routine about it, and there won’t be in the near future.

If you think about the 8 1/2 minutes of the Shuttle’s ascent and about the hour or so of reentry, and then the five minutes as a fly-by-wire, 100-ton glider, we probably have about 120 or so hours, total, of dynamic flight in all of Shuttle history. Compare that to the thousands and thousands of hours that you would have before you would field a new generation fighter or a commercial airplane.

This is the first generation really of space travel. We’re still learning a lot.

What is your response to the naysayers who believe it’s too risky to put people in space? Why have manned missions?
We, believe me, are very aware of what the risks are, even if everybody else isn’t. Certainly our families are. We think it’s worth it. We continue to learn more and more things. We continue to make that foundation that will allow us to push back the boundaries of the unknown. Ultimately, though, it’s not about us. It’s about the future — the future we’ll leave behind for our kids.

Do you worry that the public has become less enamored of space exploration?
No, I don’t. But I also know that we have a continuing obligation to communicate and educate the public. There is no doubt about that.

Certainly in ten years from now, we will be viewed as having been very wise to have pursued space exploration. Is it worth the risks? Absolutely.

Then I tell them it’s less than a penny for all of NASA, before we start getting even lower than that to what actually goes to human space flight. They’re always astounded the number is so low.

When I think of the benefits that we’ve already derived from space exploration over the last few decades, and the investment that we’ve made in our future, it astounds me, as well. And there is so much more to come.

I believe that an International Space Station will be blindingly successful, far beyond Hubble Space Telescope’s success even, in terms of relevance to people all over the world. We can’t afford to turn our backs on the program.

I think we’ll hear a resounding “yes” at the end of the day. Certainly in ten years from now, we will be viewed as having been very wise to have pursued space exploration. Is it worth the risks? Absolutely.

How do we get from where we are today, to where you see us going?
We need to be determined to meet our Return to Flight objectives. This will be a process that we will need to recalibrate and recertify each and every day. We will have to earn back trust one day at a time, one launch at a time, one mission at a time, and one landing at a time. This is exactly what I’ve told my Return to Flight team.

But, of course, you can talk all you want, and if that’s not how you comport yourself, if that’s not how you actually live, then it won’t have any lasting credibility. As individuals and as an Agency, we must be anxious to learn from our mistakes, and we must be persistent in the face of adversity. Few will remember what we said, but it is my fondest hope that years from now, all will marvel at what we, together, have done.