Back to Top
Home/36/ASK Magazine/Magnetospheric Multiscale: An In-House and Contracted Mission 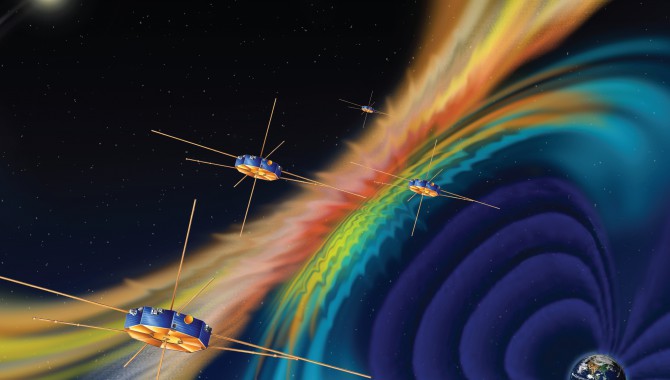 The Magnetospheric Multiscale (MMS) mission, a scientific satellite–development project managed by the Goddard Space Flight Center, is both an in-house project and a contracted one. The four MMS spacecraft are being developed by Goddard; the 100 MMS instruments are being developed under contract to Goddard. MMS offers examples of the advantages and disadvantages of both kinds of work, and the challenge of combining the two. 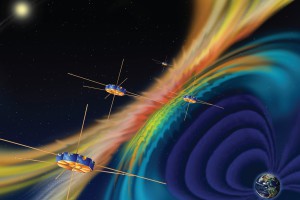 MMS is a NASA Science Mission Directorate heliophysics mission intended to gain an understanding of the universal process of magnetic reconnection, in which energy in magnetic fields is converted into particle kinetic energy and heat. The mission consists of four identical satellites, each with a payload of twenty-five instruments, that will circle Earth in highly elliptical orbits to measure magnetic fields, electrical fields, plasmas, and energetic particles. The satellites, flying in a tetrahedron formation as close together as 10 km, will take measurements in three dimensions with unprecedented resolution. Launch of all four satellites on one Atlas V is scheduled for August 2014.

Most of NASA’s funding is spent on contracts. Large corporations, universities, medium-size companies, small businesses, research institutes, and consultants work under contract to NASA to provide rockets, space hardware and software, aeronautics research, scientific analysis, ground-system development, and resources for the myriad activities that NASA undertakes. Some of NASA’s responsibilities are inherently governmental and cannot be contracted, but some development items that could be contracted are carried out by NASA employees.

As explained in the NASA Strategic Plan, the agency needs to maintain the institutional capability and core competency of its workforce by performing some of the hands-on work itself. At Goddard, most satellite projects go to prime contractors, but some are developed in house—the spacecraft is designed, manufactured, and tested by Goddard civil-servant engineers. In-house projects provide the workforce with the personal experience necessary to oversee the development of contracted work. Support-service contractors augment the civil servants’ work, providing business and engineering expertise, including configuration management and mechanical engineering.

In 2006, NASA Headquarters assigned the development of the MMS spacecraft as a Goddard in-house development. All MMS instruments will be developed under a single contract by Southwest Research Institute.

Under the management of the MMS project, the Goddard Applied Engineering and Technology Directorate (AETD) will design, manufacture, and test the four MMS spacecraft and integrate them with the four instrument suites. MMS spacecraft development involves configuration-controlled documents and signed work agreements between the MMS project and AETD, but there are no contracts associated with in-house development. From the project management perspective, there are pluses and minuses to in-house spacecraft development.

Both in-house and contracted approaches can be successfully used to develop flight projects. As suggested here, both approaches have significant strengths and significant potential weaknesses.

The MMS instruments are being developed under a Goddard contract with Southwest Research Institute, which leads a team of subcontractors and international partners that collectively will build 100 instruments for the mission. As with all Goddard contracts, NASA provides the requirements, funding, and oversight. The Southwest Research Institute team designs, manufactures, tests, and delivers the instruments to the MMS project. The project reviews the design and contract deliverables, provides technical direction and the interfaces to the spacecraft, works with the instrument team to resolve issues, and monitors technical progress, schedule, and costs. From the project management perspective, there are pluses and minuses to contracted missions.

Universities on the MMS instrument team are also affected by the economy, as less state money is available during hard times, which could result in hiring freezes or less funding for labs and equipment.

The Best of Both Worlds

Both in-house and contracted approaches can be successfully used to develop flight projects. As suggested here, both approaches have significant strengths and significant potential weaknesses. As the MMS mission proceeds toward its scheduled 2014 launch, management will continue to try to capitalize on the advantages of both the in-house and contracted aspects of the project and minimize the disadvantages.

Karen Halterman is the MMS project manager. Previously, she was the project manager for the Polar Operational Environmental Satellites project, a fully contracted mission.