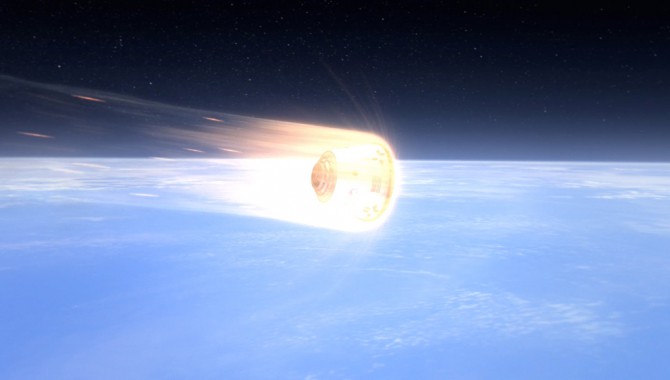 By Andrew Chambers and Dan Rasky

NASA is committed to working with private industry to develop the next generation of space-transportation technologies. 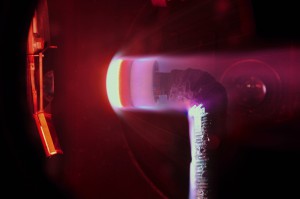 A sample of PICA-X heat-shield material subjected to temperatures of up to 1,850°C (3,360°F) at the Arc Jet Complex at NASA Ames Research Center, Moffett Field, California. The NASA-originated PICA material holds the record for high-speed reentry into the Earth’s atmosphere. The SpaceX-developed and -manufactured PICA-X variants meet or exceed the performance of the original material, and will protect the Dragon spacecraft on its return to Earth.
Photo Credit: SpaceX

The agency’s Commercial Crew and Cargo program manages Commercial Orbital Transportation Services (COTS) partnership agreements that provide financial and technical resources to organizations committed to developing reliable and economical new launch vehicles and spacecraft. SpaceX is one of these partners. Successful NASASpaceX collaboration has created the heat shield for the firm’s Dragon spacecraft.

The NASA 2007 Government Invention of the Year, a lightweight heat-shield material developed at Ames Research Center, was the basis of the Phenolic Impregnated Carbon Ablator (PICA) heat shield that protected Stardust from temperatures as high as 2,500C as the spacecraft reentered Earth’s atmosphere at more than 28,000 mph—faster than any previous manmade object. PICA was the ideal choice for the Stardust mission to collect samples from comets; other thermal-protection materials able to withstand those temperatures would have been too heavy.

The Stardust success led to serious consideration of PICA for other NASA programs. The designers of the Orion crew capsule tested the material extensively, designing and building a full-scale engineering prototype heat shield for Orion. Uncertainties about the potential risks of a multi-tile PICA heat shield (the much smaller Stardust shield was a single piece) led the Orion team to select the Apollo heritage Avcoat thermal-protection system for Orion. But their thorough research on PICA proved a valuable resource for other programs.

One is Mars Science Laboratory (MSL). The size of the science lab lander and the speed of Mars entry and descent mean that thermal-protection material used on earlier, smaller landers would not work for MSL. Christine Szalai and her colleagues at Jet Propulsion Laboratory, Ames, and Lockheed Martin have successfully designed, fabricated, and flight certified a multi-tile PICA heat shield for the science lab that is currently waiting for its 2011 flight to Mars. 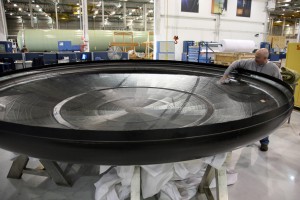 Inspecting the carbon-composite carrier structure for the first Dragon spacecraft heat shield, fresh from its mold. At nearly 4 m (13 ft.) in diameter, the structure supports the PICA-X tiles that protect the spacecraft during reentry.
Photo Credit: SpaceX/Roger Gilbertson

Given PICA’s light weight and high performance, and the potential to benefit from knowledge gained on Orion and MSL, SpaceX chose PICA for its Dragon spacecraft, a pressurized capsule designed to carry cargo and eventually astronauts to and from low-Earth orbit. The company asked experts at Ames to provide support for the development of a 3.6-meter PICA shield for Dragon, and NASA made its expertise and specialized facilities available to SpaceX. SpaceX undertook the design and manufacture of the reentry heat shield; it brought speed and efficiency that allowed the heat shield to be designed, developed, and qualified in less than four years.

This is where we met. Andrew Chambers was SpaceX project lead for the heat shield. NASA sent Dan Rasky, one of the original developers of the material, to spend most of 2008 working half time at SpaceX’s Los Angeles facility. With his own desk, phone, and SpaceX badge, he was very much a member of the firm’s thermal-protection system team. Having started his career at a small, entrepreneurial aerospace company, Rasky found working at SpaceX to be like coming home, but he still experienced some culture shock after twenty years at NASA.

The speed of decision making was the most dramatic difference. At one meeting of the dozen team members and SpaceX Chief Executive Officer and Chief Technical Officer Elon Musk, Musk turned to Rasky during the discussion of options for producing PICA and asked, “Dan, what do you think?” When Rasky described his preference and the reasons for it, Musk said, “OK. That’s what we’re going to do.” 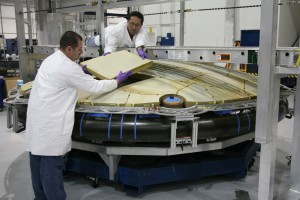 At NASA, his proposed solution would have led to a series of studies and additional meetings before a decision was made. But on-the-spot executive decisions that would be difficult at a government agency or large corporation readily happen at a small private company. Rasky found that kind of decisiveness exhilarating and a little alarming—what if he was wrong?

Chambers had seen that sort of initial reaction before, from colleagues who joined SpaceX from other, traditional aerospace companies. But his team’s ability to make these decisions and execute them efficiently is the key to rapid development. At SpaceX, most processes are developed and performed in house, making design iteration highly efficient. In the time others take to determine the scope of their trade studies, the SpaceX team will build and test the required prototypes. Additionally, an integrated thermal-protection system team that brought together the required specialist areas, including aerodynamic predictions, structural analysis, and materials performance, allowed smart choices to be made and a “sparse matrix engineering” approach (not filling in all the blanks before proceeding) to be taken when developing prototypes. It’s the prototype that tells you whether your decisions were sound. If it fails to meet expectations, it provides data needed to make a better choice next time.

The speed of the process was enhanced by having many of NASA’s technical experts only a phone call away. Additionally, an efficient procurement system allowed even exotic materials to be delivered in just a couple of days and used for the next prototype.

The small size of the SpaceX PICA team—five engineers and six or seven technicians—also contributed to speed. Group members all worked at the same site and could easily meet to hash out problems, exchange information, and make decisions. 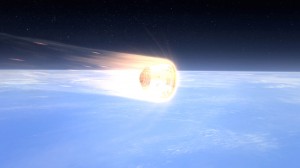 Protected by a PICA-X heat shield in this artist’s rendition, the Dragon spacecraft reenters the Earth’s atmosphere at around 7 kilometers per second (15,660 mph), heating the exterior of the spacecraft as high as 2,000°C (3,620°F).
Image Credit: SpaceX

SpaceX has the advantage of speed and the freedom to innovate; NASA brings a breadth of experience and technical expertise to the table. It was NASA, after all, that carried out the research to develop the phenolic impregnated carbon material in the first place. NASA has unmatched experience in how materials and spacecraft actually behave in flight. And NASA has special facilities that small entrepreneurial companies could not readily afford. So, for instance, SpaceX makes use of the arcjet facilities at Ames that offer the only way to test the Dragon shield material at the requisite high temperatures.

When different organizations try to work together—and especially organizations with different cultures—they sometimes run into trouble. Failure to understand one another’s values and ways of working can get in the way. A sense of ownership of a project or a technology can interfere with knowledge sharing and cooperation. NASA and SpaceX have not experienced any of those problems in the PICA heat-shield work. Part of the success of the collaboration is due to the two organizations’ shared engineering language and shared enthusiasm for the virtues and potential of PICA. Part of it is undoubtedly due to the shared greater goal of new capabilities for successful spaceflight—the ultimate aim of the COTS partnerships.

The benefits SpaceX has derived from this collaboration are clear. They were able to take advantage of the extraordinary capabilities of PICA and the knowledge developed about it in the course of several NASA programs. And they got access to NASA’s testing facilities.

But NASA benefited, too. For one thing, the knowledge flow goes both ways. What SpaceX has learned about designing, testing, and manufacturing large PICA heat shields is also available for NASA to apply to current and future programs. In addition, NASA can learn from SpaceX’s work practices. Although the agency will never operate like a small, entrepreneurial firm, its own innovative work could benefit from a version of SpaceX’s sparse matrix engineering and rapid prototyping.

The ultimate mutual benefit will emerge when the Dragon spacecraft delivers cargo and crews to the International Space Station and returns safely to Earth, protected by its PICA heat shield.

Andrew Chambers started his career in the propulsion department of SpaceX in 2004. He initially worked on the development of various liquid rocket engines, including those that will lift the Dragon spacecraft. Over the past four years, he has developed the reentry heat shield for this capsule.

Dan Rasky is the director for the Emerging Commercial Space Office at Ames Research Center and a senior scientist with NASA. He is a co-founder and director of the Space Portal, whose mission is to "be a friendly front door for emerging and nontraditional space companies."