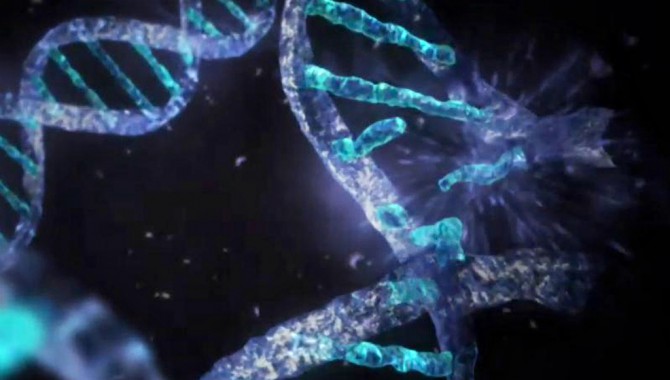 To a rocket scientist, you are a problem. You are the most irritating piece of machinery he or she will ever have to deal with. You and your fluctuating metabolism, your puny memory, your frame that comes in a million different configurations. You are unpredictable. You’re inconsistent. You take weeks to fix. … A solar cell or a thruster nozzle is stable and undemanding. It does not excrete or panic or fall in love with the mission commander. It has no ego. Its structural elements don’t start to break down without gravity, and it works just fine without sleep.

The human body does weird things in microgravity. Bones weaken as they lose density, the heart periodically goes off beat, and muscles atrophy despite hours of mandated exercise. Flying in space is unnatural for terrestrial beings. With our sights set on flying humans in the harsh space environment farther and longer than ever before, engineering future space transportation systems with the human factor in mind has become more important and challenging than during the first half century of human spaceflight. 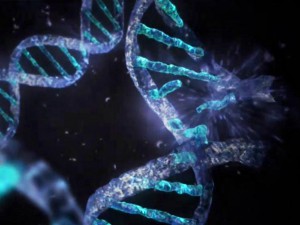 NASA estimates it will take ten months for astronauts to reach Mars for a yearlong mission, and ten months to return—a total of nearly three years. Currently, astronauts spend no more than approximately six months in microgravity on the International Space Station. When they return to Earth, their muscle tone is on par with an octogenarian, and they cannot walk away from a spacecraft on their own. These astronauts do not lack the “right stuff”—rather, this is the reality of how microgravity affects the human body in today’s state-of-the-art spacecraft.

Before we flew anything in space, no one knew how we would function without a continuous gravitational field. Today, planning for long-duration space exploration is still a daunting task with big challenges such as radiation exposure and bone-density loss, and the less visible, but equally complex, challenges such as the response of neurosensory systems to prolonged microgravity. One piece of this puzzle is understanding the change in responsiveness that occurs in the human gravity-sensing vestibular system—that system in the inner ear that contributes to our sense of balance and spatial orientation. It is the neurosensory system that allowed us to take a small step and a giant leap on the moon but, if left in microgravity too long, may not allow for either to happen on Mars.

Gravity As Most of Us Know It

William “Bill” Thornton is a former NASA astronaut, medical doctor, principal investigator, and physicist. He is meticulous, rigorous, and precise about most everything. He also was part of the astronaut support crew during Skylab and flew as a mission specialist on shuttle flights STS-8 and STS-51B. He studied, among other things, changes in the vestibular system while in microgravity and during reentry to Earth.

“Here I am, sitting solidly in my chair,” said Thornton. “I feel my joints are oriented … to the [force of gravity].” He then shut his eyes. “I still know which way I am oriented … primarily because of these remarkable little hair cells, microscopic hair cells, tens of thousands of them in each inner ear.”

When these hair cells bend, the brain determines how the head and body are oriented with respect to gravity. But they can’t bend on their own. They are set in a gelatinous layer that has little “stones” called otoliths (Greek for “ear stone”) embedded on top of the layer. When gravity tugs on these stones, they tug at the gelatinous layer, causing the hair cells to bend.

“If I tilt my head forward just sitting here in my chair, [gravity] is going to deflect the [otoliths] and hair cells downward, which tells me one of two things,” said Millard “Mill” Reschke, NASA’s chief of neuroscience located at Johnson Space Center. “I’ve either turned my head forward or I’m accelerating in one direction backward.”

NASA estimates it will take ten months for astronauts to reach Mars for a yearlong mission, and ten months to return—a total of nearly three years.

“But,” continued Reschke, “if I tilt my head in 0 g, what happens? Nothing. There’s no signal from those hair cells to tell me that I have moved my head forward.” This is when things get wonky.

“In the new environment where there is little gravity, the brain begins to learn that stimulation of the otoliths is only via linear acceleration,” said Reschke, not tilts. Upon return to Earth, the brain continues for some time to interpret otolith responses just as it did in microgravity. “Making head tilts now feels like a linear acceleration.”

In the early 1970s, Reschke was teaching at a university when he got an offer to study neurosensory systems at NASA. Not one for university professing, he said, “I made a beeline for [NASA].” 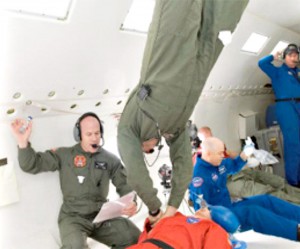 Mission architecture limits the amount of equipment and procedures that will be available to treat medical problems. Limited mass, volume, power, and crew training time need to be efficiently utilized to provide the broadest possible treatment capability.
Photo Credit: NASA

When he arrived, Apollo was ending and Skylab was gearing up. Reschke would study vestibular function in microgravity. His lab was small, three people at most, and he befriended Thornton. “He was the first astronaut I had ever met,” recalled Reschke, “and we immediately started debating.” Until Thornton retired, the two men spent most of their careers challenging one another in order to better understand vestibular instability that resulted from spaceflight.

When Reschke started, conventional thinking held that if an astronaut didn’t move in his environment, he couldn’t adapt to it. Since the Mercury program, space capsules had only gotten bigger, and Skylab would offer the most room yet. More space for an astronaut to move around in meant a greater likelihood of possible changes in the vestibular system’s response and, consequently, the brain’s interpretation of movement. What they found was that these changes occurred more often than anyone realized.

“At the time, as far as anyone knew, motion sickness was not a common side effect of spaceflight,” said Reschke. “It wasn’t until the Skylab flights when [astronauts] finally admitted to motion sickness being a problem.” Their admission came after an astronaut asked where he should dispose of his emesis (vomit) bag. Unbeknownst to him, he had left his microphone on and the jig was up. A love of flying and the fear of being declared “unfit” made astronauts reluctant to report motion sickness.

In 1989, NASA started the Extended-Duration Orbiter Medical Project (EDOMP) to better understand the changes microgravity induced in humans. At that point, the shuttle hadn’t flown astronauts for more than ten days. When they returned, astronauts experienced difficulty standing up and sometimes fainted. With plans for building and inhabiting an International Space Station moving forward, NASA was concerned about a crew’s ability to land and exit the orbiter after long-duration missions in microgravity.

The EDOMP program led to the development of space exercise devices like treadmills and rowing machines to help mitigate some of the bone, muscle, and cardiovascular problems caused by microgravity. As for space motion sickness, there are some psychological training techniques NASA has up its sleeve, but most astronauts are prescribed medication to lessen the effects.

Microgravity As Few of Us Know It 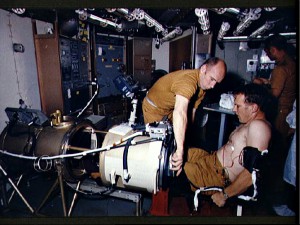 After launch, when the astronauts unstrap themselves from their seats and start to move about the orbiter, “almost immediately you start to experience a little fluid shift in your body where fluid is moving from the extremities toward the head and the trunk of the body,” said Reschke. “Your postural response becomes changed significantly.” Most astronauts feel like they’re tumbling and assume a quasi-fetal position: bend in the spine, head thrust forward, knees drawn up.

During one mission, Thornton recalls unstrapping himself and floating out of his chair, immediately going about his work with his crewmate. “We moved very, very carefully, making no sudden motions,” he said. “About an hour [later] and both of us were springing a leak [a euphemism for vomit].”

His crewmate was the first to reach for his emesis bag. Thornton’s medical training kicked in. “I grabbed him and started doing a standard routine neurological exam,” he said. There was no pre-indication it was going to happen, recalled Thornton. No nausea, disorientation, nothing. At this point his neurological exam “was totally normal.” At least it was until Thornton had his crewmate close his eyes and proceeded to tilt him like the hands on a clock.

“He’s one of the nicest men, but when I did that he came up shouting, ‘Don’t do that!'” recalled Thornton. His crewmate had space motion sickness and had become hypersensitive to the tilting motion.

Thirty minutes later, Thornton couldn’t get his emesis bag out fast enough. “Believe you me, globules of vomit floating around in weightlessness is not a pleasant thing.”

This is only one of several effects microgravity has on the vestibular system. Since the system and the muscles that control eye movements are connected, delays in eye reflexes can also occur. It may take one second or more to fixate on a visual target. When you turn your head to track an object in your visual field, your vestibular system tells the eye muscles that the head is moving and that if they’d like to keep that object in view, they need to move, too. In space, eye-tracking movements can be delayed due to the lack of gravity acting on the vestibular system. 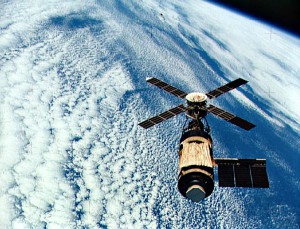 Once on the ground, readaptation to the earth begins almost immediately. Some systems take longer than others to recover, but within the first six to eight hours, most are returning to normal. Said Reschke, “You’re establishing neural connections like crazy at this point. Turning your head to see something after a long mission can take up to several days [to recover].”

Head turns can sometimes cause distortion and blurring of the visual field. If the mission lasts longer than six months, it can sometimes take weeks. When astronauts return, they feel very heavy. Said Thornton, “When you walk, you notice that you are unstable.” Shut your eyes and you may fall down.

All of a sudden, gravity is tugging on the tiny otoliths in your ear in a way that it hasn’t for months.

The Future of Human Factors

Engineers and scientists have addressed most of the immediate problems that arise from long-duration spaceflight: eating, drinking, breathing, sleeping, and going to the bathroom. But invisible changes such as vestibular instability, loss of bone density, and cardiovascular changes will require more innovative solutions and greater collaboration between NASA disciplines.

Although working in different capacities, Reschke and Thornton continue to wrestle with the challenges of sustaining human functions during space-exploration missions. Thornton is writing a handbook for engineers that offers information on how to design space transportation systems of the future with human factors in mind. Reschke looks to continue expanding upon his study of the vestibular system in microgravity at Johnson and through enhanced international collaboration.

“We know that people can live in space for six months without a whole lot of difficulty,” said Reschke. “It’s those transitions between 0 g and 1 g—the transitions back to Earth or another gravitational environment—where you’re going to have a problem.” It is those other gravitational environments that are of interest to aerospace engineers and neuroscientists alike.

Gravity on Mars or an asteroid is a fraction of the gravity we feel on Earth. But there won’t be a ground crew to lean on during egress on Mars. Without better ways to mitigate the effects of microgravity on human space explorers, one small step might actually be one careful crawl.