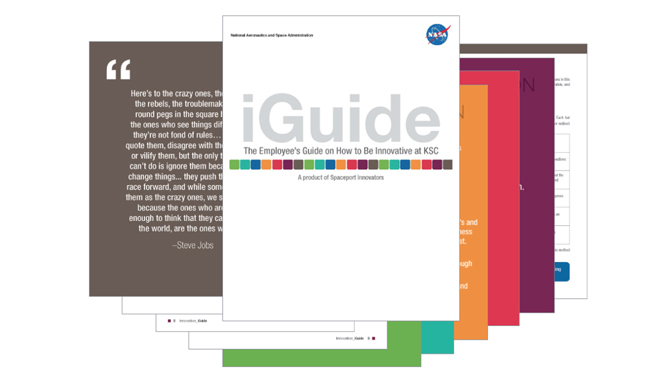 Since 2011, a group of Kennedy Space Center (KSC) employees calling themselves the Spaceport Innovators have been organizing and attending talks on a wide range of subjects. Innovators have also put together an annual event called the Innovation Expo at KSC that features speakers and displays highlighting work at the center as well as new ideas that—they hope—will help spark innovation. Over time, membership in the group has grown to almost 400 people, with nearly every KSC organization on center represented.

The fundamental thrust behind Spaceport Innovators’ activities is that new thinking springs from combinations of existing ideas that have not been brought together before. So the group’s emphasis has been on exposing members to projects and ideas from many areas, especially from fields that they may think are unconnected with their own. From the beginning, the organization has sponsored lunchtime talks by speakers both from KSC and outside the center. Typically, 20 to 30 individuals participate in each meeting.

The biggest challenge has been to attract busy people to talks that they think are not relevant to their work. That stumbling block makes clear that there is still much work to be done to foster innovative thinking, since it is precisely by connecting those supposedly unconnected ideas that innovations happen.

To promote exposure to new ideas, the group has added brief TED Talk–like videos on a variety of subjects to the beginning of meetings. A recent meeting about its new iGuide to innovation, for instance, started with a video on jazz. The fact that jazz musicians invent music as they play by listening and responding to each other (rather than just going off in their individual directions) suggests a model for the mixture of freedom and discipline that characterizes innovative collaboration.

To encourage knowledge-sharing on a wider scale, the group has organized annual center-wide innovation expos, which began in September 2012. Laboratories and other facilities at the center offer tours and put together exhibits that highlight their work. In many cases, people learn for the first time what their colleagues in other departments are doing. Organizers hope that those encounters will encourage ongoing conversation between groups and, ultimately, innovative collaborations.

The first one-day event in 2012 also featured a range of speakers on innovation, some from within NASA and some from other organizations including the U.S. Navy, Publix supermarkets, the Walt Disney Company, and Universal Orlando.

One of the core principles of innovation is that it happens most often in groups. The idea of the solitary genius creating the next new thing in his private workshop is mainly a myth; collaborations that blend and test ideas from various sources are the driving engines of successful innovation. So it is important to have physical spaces where people can work together and equally important that those spaces support innovative processes. Spaceport Innovators have been helping to develop new spaces at KSC especially designed for innovation.

One such space was developed for KSC Swamp Works in 2011. It features open work spaces and white boards everywhere to encourage collaboration and conversation. Spaceport Innovators are working on two more spaces, one on the north side and one on the south side of the space center, to make these innovative areas easily accessible to any groups that want to use them.

THE iGUIDE AND BEYOND

At the end of 2014, Spaceport Innovators released the iGuide, described as an employee’s guide on how to be innovative at KSC. It describes processes for coming up with useful new ideas and developing them into innovations. (As the guide says, an idea alone is not an innovation; the idea must be turned into a new process or product that has an impact on people.) The iGuide focuses on innovation as a collaborative process and outcome. In addition to offering resources and techniques to encourage innovation, it addresses some of the factors that stand in the way, including fear of failure or ridicule and negativity that suppresses or outright rejects new ideas before they have been tested.

Perhaps as important as the advice the guide offers to innovators is the fact that it exists as a tangible proof of the importance of innovation at KSC. The opening section of the engaging publication reinforces this point with quotations from more than a dozen senior leaders that encourage innovation and emphasize its importance to the future of Kennedy.

Freely available as a PDF file, the iGuide has generated positive response at KSC and other centers that are using the guide or planning to develop their own versions.

Spaceport Innovators has been and remains a completely volunteer effort, with no formal charter. Organizing members sometimes struggle to find time away from their other work to devote to it, but they value the freedom that unofficial status gives them to launch new projects without having to go through lengthy approval processes. Their autonomy has made it possible to work on innovative spaces at KSC and to publish the iGuide; the group is likely to undertake other pioneering approaches to innovation in the future.

David J. Miranda is the Project Lead for the IDEAS project at NASA Kennedy Space Center.