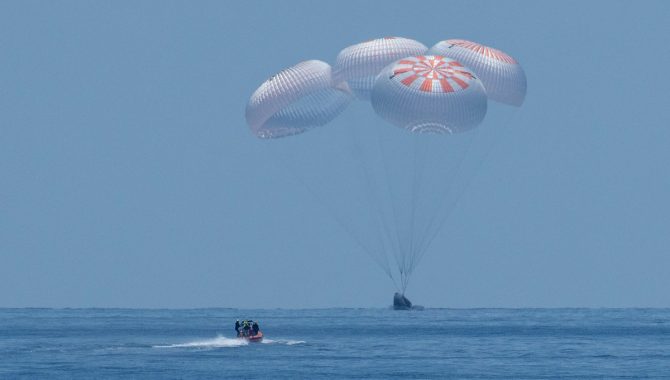 The SpaceX Crew Dragon splashes down in the Gulf of Mexico off the coast of Pensacola, Florida, Sunday, Aug. 2, 2020.
Credit: NASA/Bill Ingalls

On August 2, 2020, a white capsule discolored from exposure to temperatures approaching 3,500° Fahrenheit, descended toward the Gulf of Mexico beneath four massive parachutes. Although it had once been traveling about 17,500 miles per hour as it reentered Earth’s atmosphere, atmospheric friction and two sets of parachutes had slowed it dramatically until, at 2:48 p.m., it hit the surface of the water with a sharp smack that could be heard miles away. And then it began bobbing in the waves.

With that, Robert Behnken and Douglas Hurley became the first NASA astronauts to splash down in a return from space since Thomas P. Stafford, Vance D. Brand, and Donald K. “Deke” Slayton splashed down in the Pacific Ocean on July 24, 1975 at the end of the Apollo–Soyuz Test Project.

It was the first ever return from space for NASA astronauts in a capsule built and operated by a commercial aerospace company—SpaceX’s Crew Dragon Endeavour. This SpaceX Demo—2 mission was part of NASA’s Commercial Crew Program, which encourages the development of a robust commercial space industry in which NASA is one of many customers. 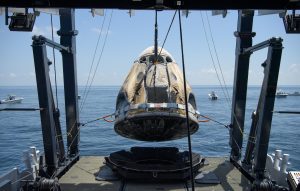 NASA astronauts Robert Behnken and Douglas Hurley are aboard the SpaceX Crew Dragon Endeavour spacecraft as it is lifted onto the SpaceX GO Navigator recovery ship shortly after landing.
Credit: NASA/Bill Ingalls

“Once we descended a little bit into the atmosphere, the Dragon really, it came alive,” Behnken said speaking at press conference at Johnson Space Center where he and Hurley were taken after being pulled from the capsule. “It doesn’t sound like a machine, it sounds like an animal coming through the atmosphere, with all the puffs that are happening from the thrusters and the atmospheric noise.”

This was NASA’s 32nd splashdown of a crewed capsule. Alan Shepard was the first NASA astronaut to splash down, the lone pilot in the Mercury-Redstone 3 capsule. After reaching an altitude of 116.5 statute miles during an approximately 15-minute suborbital flight, Shepard splashed down in the North Atlantic Ocean on May 5, 1961. Although he experienced a staggering maximum g-force of 11 during the flight, he recalled that the splashdown had been similar to touching down on an aircraft carrier in an airplane. The first splashdown went so smoothly, Shepard was on the deck of the aircraft carrier USS Lake Champlain in a matter of minutes.

The next splashdown was considerably more challenging. Mercury-Redstone 4 launched and landed on July 21, 1961. It was another approximately 15-minute flight, this time reaching an altitude 118.3 statute miles. The capsule splashed down in the North Atlantic Ocean with pilot Virgil I. “Gus” Grissom. Before rescue helicopters could attach to the capsule, an explosive hatch—new to this mission—detonated and released. The choppy waves surrounding the capsule began to pour in.

Grissom escaped the capsule, but had difficulty treading water in the rough sea. As one pilot struggled to raise the water-filled capsule with his helicopter, a second pilot rescued Grissom, who had battled for three minutes to keep his head above the waves. Eventually, the first helicopter pilot was forced to cut the capsule loose and let it sink about 3 miles down to the ocean floor.

The first crewed splashdown of a Gemini capsule, Gemini 3, was also led by Grissom, with astronaut John W. Young as the pilot. It was the first mission in which astronauts performed maneuvers to significantly change the spacecraft’s orbit. It was also the only mission in which astronauts shared a contraband corned beef sandwich. About 4 hours and 52 minutes after launch, Gemini 3 splashed down on March 23, 1965. The capsule was well off course, about 45 nautical miles from the target site. Grissom and Young remained in the capsule with the hatch closed until the USS Intrepid arrived to recover the crew and capsule.

By the Apollo era, computer guidance technology had advanced to the point that the capsules could be expected to splash down very close to target. When Apollo 9 splashed down on March 13, 1969 it was just 3 miles away from the target; that was the farthest away any Apollo capsule would ever splash down. Apollo 13, 14, 15, 16, and 17 all splashed down within 1.2 miles of the target site.

Over 10 days, 20 hours, and 9 minutes in October 1968, the future of the space program rode with the astronauts of Apollo 7, who felt pressure to deliver a perfect mission. The crew was able to achieve all their mission objectives despite having developed head colds in space. Apollo 7 splashed down on target in the North Atlantic Ocean on October 22, 1968. The crew and capsule were recovered by the USS Essex. 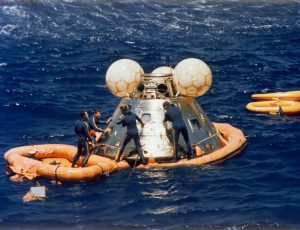 (24 July 1975)—A team of U.S. Navy swimmers assists with the recovery of the ASTP Apollo Command Module following its splashdown in the Central Pacific Ocean.
Credit: NASA

Prior to August 2, the last NASA splashdown was on July 24, 1975 at the end of the Apollo–Soyuz Test Project. Commander Stafford, Command Module Pilot Brand, and Docking Module Pilot Slayton launched on July 15, 1975 to dock with a Soviet Union Soyuz spacecraft with cosmonauts Alexei Leonov and Valeri Kubasovon aboard. The mission included joint science experiments, spacecraft tours, and shared meals.

After the diplomatic triumph in space as Cold War tensions eased, the Apollo astronauts had a difficult reentry when the reaction control system, which should have been switched to manual mode, fired automatically to stabilize the capsule. This caused nitrogen tetroxide to enter the cabin through an open vent. “So, we all got a lot of whiffs of nitrogen tetroxide, which is really a bad chemical to breathe…,” Brand recalled. Brand, sitting next to the vent, lost consciousness. Stafford secured oxygen masks for the crew. After splashdown, the crew spent five days in a hospital undergoing lung treatment. They all fully recovered.

“One of the things that we’re most proud of is bringing launch capability back to the Florida coast, back to America, and of course, landing safely at the end of all of that,” Behnken said of the splashdown.