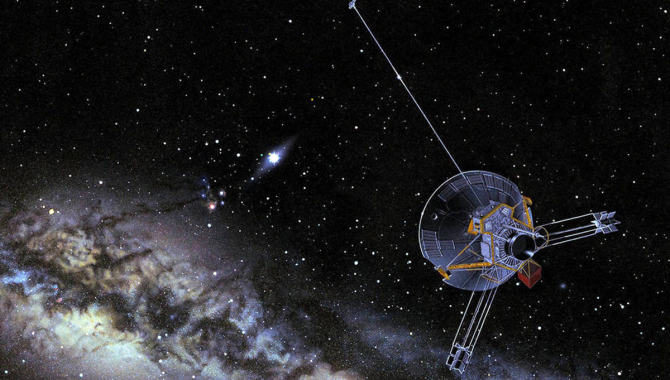 In this artist’s illustration, a Pioneer space probe travels beyond the planets in the solar system. Credit: Don Davis/NASA

As one of the brightest objects in the night sky, humans were fascinated by Jupiter long before Galileo Galilei recorded the first series of scientific observations of the massive planet in 1610 using a small device he made from wood, paper, and copper that was yet to be named the telescopio. And although the approximately 4-foot long tube, slightly more than 2 inches in diameter, was rudimentary, the results were stunning. He identified four objects around Jupiter—Io, Europa, Ganymede, and Callisto—and determined that they were moons orbiting the planet, providing further support for the heliocentric theory of Copernicus. 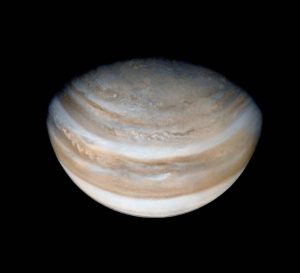 As telescope technology advanced, scientists learned more about Jupiter, discovering colorful features in its atmosphere, including the Great Red Spot—which proved to be a persistent storm larger than the Earth. Later, in 1938, three “white ovals” were discovered, large storms that merged 60 years later to become likely the second largest storm in the solar system, behind the Great Red Spot.

On September 1, 1974, 48 years ago this month, humanity began its closest look yet at the planet, when NASA’s Pioneer 11 arrived at Jupiter. On December 3, the probe came within 26,400 miles of the planet’s cloud tops. It was traveling more than 106,000 miles per hour, the fastest a spacecraft had traveled at that time. It sent unprecedented images to Earth, as well as important data about Jupiter’s radiation levels and magnetosphere.

“Ancient peoples, perhaps thousands of years ago, undoubtedly conceived the idea of ‘reaching out’ to Jupiter, the largest and most brilliant of the ‘wandering stars,’” wrote Pioneer Project Manager Charles F. Hall, in the introduction to NASA publication SP-349/396 PIONEER ODYSSEY. “But for mankind to stretch across the half billion miles to the giant planet of the Solar System many advances in technical and organizational fields of human endeavor had to be made.”

The success of Pioneer 10 and Pioneer 11 traces back to the dawn of the space age in 1961, when leaders at NASA’s Ames Research Center (ARC), including Hall, presented to agency leaders a proposal to develop and manage a solar probe project at ARC. That proposal evolved into the Pioneer Project, which would rewrite human understanding of deep space. 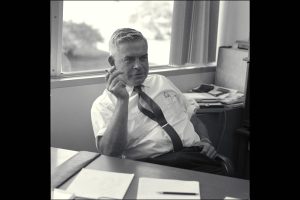 “In the ensuing years, a dedicated and cooperative effort of several thousand people in Government, university, and private industrial organizations converted the idea into a reality. Less than twelve generations after Galileo first saw the banded disc of Jupiter and the flickering dots of its large satellites in the newly invented telescope, mankind sent a machine to make observations within that Jovian system,” Hall wrote.

As a young engineer, Hall worked for NASA’s predecessor the National Advisory Committee for Aeronautics (NACA), making important contributions to such high-profile projects as the Lockheed P-38 Lightning and the North American P-51 Mustang, where his research led to improved performance from the plane’s wings. As the nation’s nascent space agency absorbed NACA, Hall smoothly pivoted to aerospace where he quickly displayed great talent in planning and managing large, ambitious projects. He developed a reputation for effectively managing a project’s budget while carefully protecting its scientific goals.

“Space exploration projects managed by Charles Hall were executed with outstanding performance and economy, bringing world attention to Ames Research Center for its accomplishments,” then Ames Research Center Director Dr. Henry McDonald said in 1999. “Ames quickly became a major participant in NASA’s space exploration because of the excellence of his Pioneer interplanetary probes.”

Pioneer 11 was 9.5 feet long, including the cone-shaped, medium-gain antenna. The probe’s suite of high-performance instruments included telescopes, a magnetometer, and devices to detect radiation, asteroids, and infrared and ultraviolet light. The instruments were contained in a central compartment just 14 inches deep and 28 inches long. That was topped by a prominent, 9-foot diameter high-gain antenna, 18-inches deep, and made of light-weight aluminum honeycomb. 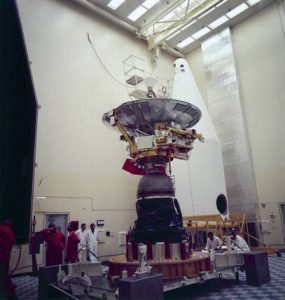 The probe was powered by two SNAP-l9 type Radioisotope Thermoelectric Generators that produced 144 W of power early in the mission. The generators were held far beyond the diameter of the high-gain antenna via trusses to minimize the impact of neutron radiation on the instruments. The probe was fitted with liquid hydrazine rocket thrusters to maintain a rotation of 4.8 revolutions per minute and to change velocity. The probe weighed just 570 pounds at launch.

Following the success of Pioneer 10, NASA set a new, more ambitious course for Pioneer 11 that took the probe much closer to Jupiter, over both polar regions, through the planet’s radiation belt at the equator, and then set it on a course for Saturn. Pioneer 11 arrived at Jupiter less than a year after Pioneer 10, but the probe made significant new contributions, taking dramatic close-up images of the Great Red Spot, returning the first data from the massive polar regions, and quantifying the mass of Callisto. Pioneer 11 arrived at Saturn in 1979, returning stunning images, discovering new moons, and returning important information about the planet’s ring system.

Designed to operate for just 21 months, Pioneer 11 passed beyond Neptune’s orbit on February 23, 1990. NASA lost contact with it on November 24, 1995, 22 years after it was launched. It was more than 4 billion miles from Earth and heading out of our solar system.

“Pioneer 11 will travel as a ghost ship in our galaxy,” said Fred Wirth, then Pioneer Project Manager at the time.

“There are certain human enterprises that seem, from the very beginning, to be touched with a certain elan that distinguishes them from others. … There is about Pioneer 10 and 11 a simplicity in concept and an elegance in design and execution that clearly transcends the ordinary,” wrote Hans Mark, who served as Director of Ames Research Center from 1969 to 1977.