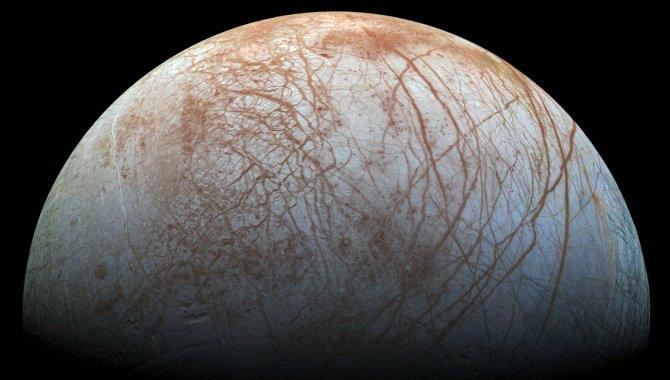 Jupiter’s moon Europa fascinates scientists searching for life in the solar system because evidence indicates it holds a massive ocean beneath surface ice that is miles thick. This image of Europa was taken by NASA's Galileo spacecraft in the late 1990s. Credit: NASA

As September 2022 draws to a close, NASA’s Juno spacecraft, in the second year of an extended mission comprising 42 additional orbits around Jupiter, will fly within 222 miles of the planet’s fourth largest moon, Europa. Juno carries the most technologically advanced instruments ever to come this close to Europa and NASA will use this opportunity to collect important data.

The flyby will provide a fresh look at the pale blue moon covered by heavy ice—between 10 and 15 miles thick—crisscrossed by sharp brown fracture lines. At first glance, it seems an unlikely target to fascinate scientists searching for life in the solar system. It is staggeringly cold. By noon, temperatures at the warmest spots on Europa’s equator are a frigid -225 degrees Fahrenheit.

Beneath that thick ice, however, there is evidence that a vast ocean extends as much as 100 miles deep and contains more than twice the water of all the oceans, seas, and lakes on Earth—2 billion cubic miles of water. Scientists theorize that this saltwater is warmed by the tidal interactions between Europa and Jupiter that cause Europa to flex regularly as it orbits the massive planet every 3.5 Earth days.

“We think that the fracturing that we’re seeing in this surface ice is, in part, caused by the tidal energy dissipation, in the past and perhaps in the present…,” said Dr. Kevin Hand, currently an astrobiologist and planetary scientist at NASA’s Jet Propulsion Laboratory, speaking in a 2014 von Kármán Lecture “Ocean Worlds of the Outer Solar System.” “This ocean is of course maintained through this tidal energy interaction.”

Juno is 11.5 feet high and 11.5 feet in diameter, powered by three large solar arrays nearly 30 feet long and 9 feet wide that combine to hold 18,698 solar cells. The cells generate about 400 watts at Jupiter, which averages 484 million miles from the Sun. Juno launched aboard an Atlas V551 with a Centaur upper stage on August 5, 2011. It was the first solar powered spacecraft NASA sent on a mission that far from the Sun, capitalizing on new high-efficiency silicon solar cells.

The spacecraft is the successful product of a collaborative team environment fostered by Juno’s first project manager, Rick Grammier, who died in 2011. The mission was selected by NASA in 2005, with an initial launch target of 2009. That target came with the caveat that the budget climate at the time could create delays, which it did. 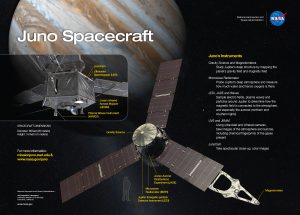 “One undeniable benefit of the extended Phase B was the time it gave us to unify the team and communicate effectively. We are a diverse, geographically distributed team, with participation from the Jet Propulsion Laboratory, Lockheed Martin, Goddard Space Flight Center, the University of Wisconsin, the Southwest Research Institute, the Applied Physics Laboratory, University of Iowa, Italian Space Agency, and elsewhere,” Grammier said in a column for ASK Magazine in 2008.

“These groups have different cultures, different expectations, and their own ways of communicating. The English language is imprecise; the same words may have different meanings for the speaker and listener. The more you talk about things together, the more mutual understanding you get—and the more each group grasps and respects the challenges and issues other groups wrestle with,” Grammier noted.

Juno carries nine instruments with 25 sensors, including a microwave radiometer, vector magnetometer, an ultraviolet imager/spectrometer, infrared imager/spectrometer, and a visible color imager. The flyby will produce high resolution images of Europa’s icy surface and data that will reveal more about the composition of that ice, as well as the moon’s interior ocean. Instruments will also return data on Europa’s ionosphere and how the moon’s plasma wake interacts with Jupiter’s magnetosphere.

The last NASA spacecraft to come this close was Galileo, which arrived at Jupiter on December 1, 1995, and orbited the massive planet 34 times, coming within 218 miles of Europa on January 3, 2000. NASA deliberately sent Galileo plunging into Jupiter’s atmosphere on September 21, 2003, as it ran low on propellant. The move ensured that when Galileo’s propellant was depleted the spacecraft wouldn’t inadvertently collide with Europa, and risk contaminating an area that could possibly contain life. The Galileo mission made many significant contributions to scientific understanding of Jupiter, including finding evidence of liquid saltwater layers at Europe, Ganymede and Callisto. 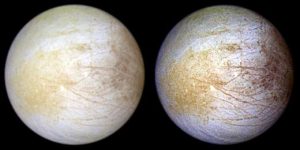 This color composite view combines violet, green, and infrared images of Europa, for a view of the moon in natural color (left) and in enhanced color designed to bring out subtle color differences in the surface (right).
Credit: NASA/ JPL/University of Arizona

Juno’s flyby of Europa will be brief and won’t answer that question, either. The spacecraft will pass the orbiting moon at a relative velocity of 14.7 miles per second. The team will begin gathering data when Europa is still more than 50,000 miles away but will need to reorient Juno to gather more data on Jupiter soon after the flyby is complete. But the data Juno collects will provide valuable new information about Europa that could help the team developing an upcoming mission, the Europa Clipper.

The Europa Clipper team is currently working toward an October 2024 launch, which would have it arriving at Jupiter in April 2030. That spacecraft will orbit Europa, using ice-penetrating radar, a magnetometer, and other instruments to learn more about the moon’s subsurface water, ocean, and interior structure. It will also search for the warmest areas that could potentially harbor life.