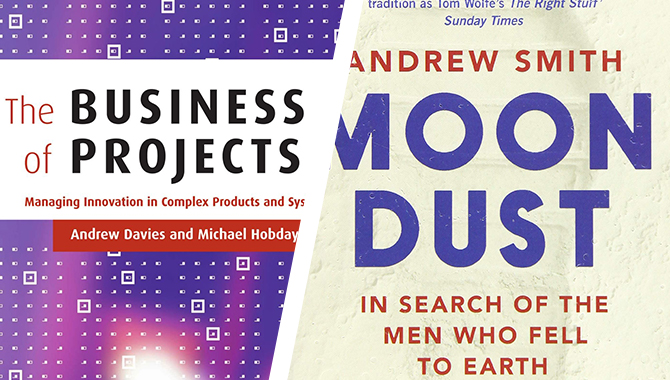 From time to time, the editors will offer brief reviews of books they believe will especially interest ASK readers. Here are descriptions of two books, very different from one another, that we admire.

The Business of Projects: Managing Innovation in Complex Products and Systems

It is no secret or surprise that much innovative and collaborative work in organizations these days happens through projects. What is surprising is just how little has been written about the nature, structure, and economics of projects. Much of the best work in this area (some by NASA employees) has been cases and stories about successful projects. These efforts are invaluable, but there is more to be said, especially as projects become more and more common in organizations that tackle complex and innovative tasks.

Written by academics who have experience working outside the academy, The Business of Projects fills this need very, very well. One of the book’s appealing distinctions is that it is solidly grounded in organizational learning and strategy literature of the past few decades that can be summed up as the “resource-based theory of the firm.” Simply put, this stream of research focuses on organizations’ capabilities, capacities, and knowledge and their appropriateness to specific tasks and environments. It shows that no organization can do everything, or even close to everything, so executives need to focus on what needs to be done and the human and social capital required for that particular work.

Using examples from high-technology, aerospace, and petroleum firms—all relevant to ASK readers—this book discusses exactly what project capabilities are and how they are to be understood, developed, and accurately measured.

The Business of Projects includes something too often missing in management texts: a chapter on the subject of learning. “Learning in the Project Business” is original and important. It uses some new-ish constructs from the emerging discipline of knowledge management and builds on Stanford Professor James March’s distinction between exploitative and explorative learning. It would be a fine place for any newcomer to project learning systems to start their own adventures in project-land, and it would also serve veterans of project wars who have never really put in the time to figure out how best to learn from successful and failed attempts.

The book concludes with some valuable rules of thumb for doing project work. Usually such concluding messages are banal, but these are realistic and valuable—another rarity in management books!

Moondust: In Search of the Men Who Fell to Earth

Moondust is the story of Andrew Smith’s encounters with the Apollo astronauts who are the only human beings who have stood on the surface of the Moon. The impetus for the book comes from the wonder he felt as an eight-year-old boy when Neil Armstrong stepped onto the moon in 1969 and his disappointment (shared by many of the astronauts) that support for human space exploration waned after Apollo.

Smith’s work vividly evokes what going to the Moon was like, the skill and courage required, and the sheer exhilaration of the experience. And it captures the varied ways the astronauts have been affected by their extraordinary adventure. In the decades since, some have shunned publicity and some have sought it. Some have focused on the facts of their missions, while others describe the texture and significance of their moonwalks. Alan Bean, for instance, has become a painter who tries to capture the look and feel of the Moon in his work, and Edgar Mitchell founded the Institute of Noetic Sciences as a result of his sense of a connection to the intelligence of the universe.

Some readers have complained about technical inaccuracies in Moondust. This is certainly not the book to read to learn about the nuts and bolts of the space program. (Many such books exist.) It is the one to read to glimpse the transformational power of space exploration and understand the lure of traveling back to the Moon and beyond it.