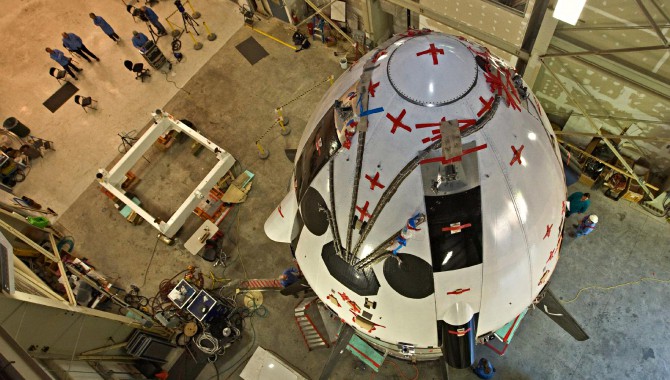 In 2007, the Exploration Systems Mission Directorate asked the NASA Engineering and Safety Center (NESC) to design, develop, build, and test an alternate launch abort system for the new Orion crew module. Ralph Roe, director of NESC, became project manager for the Max Launch Abort System (MLAS), named after Maxime (Max) Faget, a Mercury-era pioneer who designed the Project Mercury capsule and the Aerial Capsule Emergency Separation Device, commonly known as the escape tower. What we learned on MLAS could help the primary launch abort system team with some of their own technical challenges, and it was an outstanding learning opportunity for engineers who took a project through its entire life cycle in less than two years.

In order for us to accomplish our pad abort test in time, we needed to keep the design simple and use commercial off-the-shelf hardware and designs whenever we could. We went through a number of iterations to establish objectives for the MLAS test vehicle and adopted very conservative safety and design margins to compensate for our rapid prototype-design process. It was Faget’s approach to design and development, and his assertion that Project Mercury “would have never been done in the time it was done if it had not been simple,” that led us to adopt the motto, “What would Max do?” 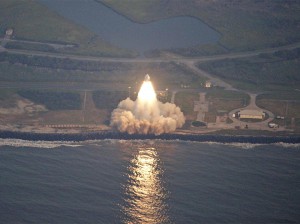 Our test vehicle would demonstrate our concept but would not physically represent an operational vehicle, so we were not constrained by weight requirements. The operational vehicle would have multiple solid rocket motors inside a bullet-shaped composite fairing, which was different from the single solid launch abort motor positioned above the Orion crew module in the primary launch abort system. For the pad abort demonstration test, we used four solid rocket motors located below the crew module. Later in the design process, we added a landing parachute demonstrator, based on the Space Shuttle solid rocket booster recovery system, to demonstrate an alternative landing system configuration for crew module recovery.

At the time, one of the greatest technical risks for the Orion launch abort system was the attitude control motor, designed to steer the crew module. The MLAS concept was of potential interest because of its relative simplicity, aerodynamic performance, and weight savings. Many of these theoretical gains would be accomplished by eliminating the attitude control motor and the launch abort tower. By developing an alternate, passively stable approach in parallel with the Orion design, we were able to collect data that could assist the current launch abort system designers if they encountered technical challenges.

To form a core team, Roe looked to members of NESC, including NASA Technical Fellows, for experience in aerodynamics, avionics, propulsion, software, and guidance, navigation, and control. He also used NESC’s agencywide infrastructure to gain access to expertise and contacts at NASA field centers. The MLAS team now includes more than 150 engineers, analysts, technicians, and support personnel from almost every NASA center, with team members providing matrix support directly to the MLAS project. 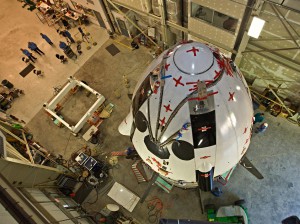 We also sought out mentors—including Apollo-era engineers, project managers, and astronauts—who readily shared their insights and experiences, helped us focus on the most important things, and pointed out areas we might be overlooking. Having been through similar challenges, they served as a terrific sounding board, and their independent perspectives were crucial to the team’s success. For example, our mentors convinced us to move from a three-point attachment design to a single-point attachment harness between the four main parachutes and the crew module because of test failures they experienced with a similar three-point design early in the development of Apollo.

Partnering with Wallops Flight Facility allowed us to leverage their sounding-rocket experience and use their range and launch facilities for the pad abort test; the Wallops engineers and analysts became integral members of our team. Faget conducted similar activities at Wallops in 1959 to develop the launch abort system for the Mercury spacecraft.

One of the more enriching aspects of the MLAS team was the interaction between individuals who came from the human spaceflight, robotics, research, and aerospace centers. We relied heavily on expertise from the research and robotic centers during the concept development phase, and as we moved through design and into assembly, the individuals with test and operations experience shared their knowledge with the team. We incorporated best practices from the aeronautics and human spaceflight centers into Wallops processes during integration and testing. This project also provided a number of engineers with their first experience in a control room, on headsets, for test, checkout, and launch. They learned from others who work in this environment on a regular basis.

Recognizing the unique opportunity MLAS provided to junior engineers to design, develop, and fly a complex system, we asked center directors to nominate high-potential engineers with five to ten years’ experience for our project. They became known as our “resident engineers,” named after the medical residency concept. They were a true asset to the team, bringing with them energy, expertise, and enthusiasm. 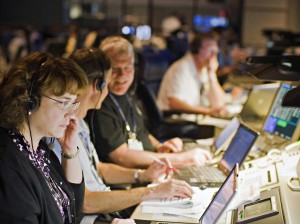 A prelaunch view, with Dawn Schaible in the foreground, of the control room at NASA’s Wallops Flight Facility.
Photo Credit: NASA/Sean Smith

Our resident engineers never sat on the sidelines, observing others; they were integral members of the team. Within two days of joining MLAS, we asked them to define the test vehicle’s instrumentation. Gathering data was one of our primary objectives, so this was no fluff task. They took complete ownership of the instrumentation, including its procurement, installation, mounting bracket design, and checkout. In addition, they designed, installed, and tested the entire flight camera system for the test vehicle. Because the MLAS project was completely independent from the Constellation program, team members had the ability to try, fail, and fix—an invaluable learning experience.

“MLAS has given me the unique opportunity to participate in a cradle-to-grave project that includes technical experts from every NASA center,” said Samantha Manning, a resident engineer from Kennedy Space Center. “I’ve gotten hands-on experience during all phases of the project. The people I’ve worked with and the knowledge I’ve gained have been and will continue to be valuable assets to my career.”

Joseph E. Grady, a resident engineer from Glenn Research Center, agreed: “MLAS gave me the opportunity to contribute to the landing and recovery task and to see firsthand how a systems engineering approach is used to integrate the efforts of all the different disciplines involved.”

The resident engineers have built a cohort of their own peers that will last long after the MLAS project is over. In addition to the experience gained by doing critical project work, they have had the rare privilege to closely interact with our mentor team, several NASA Technical Fellows, and other agency experts. “It was a rewarding experience to be part of a team that put together experts from all NASA centers and the aerospace industry to design, build, and test a flight-demonstration vehicle in such a short time,” said Grady.

Because the team was dispersed across the country, we employed several strategies to ensure good communication and integration. To build relationships and understanding among the team, we conducted co-located meetings almost every month, usually at Langley Research Center or Wallops. These weeklong sessions allowed us to work through our tougher technical problems and complicated topics and facilitated a faster-paced decision-making process. In between these meetings, the team relied heavily on teleconferences, WebEx, and instant messaging. These virtual design sessions allowed team members across the agency to review models, designs, and analyses whenever needed.

Because the MLAS project was separate from the Constellation program, we had the ability to tailor an approach that was faithful to the spirit of NASA Procedural Requirements 7123.1A. Given the fast-paced, prototype nature of our project, we accepted the risk involved with concurrent design, development, and testing. In setting up our processes—and in the spirit of our motto, “What would Max do?”—we decided to streamline our documentation by eliminating boilerplate information and relying on checklists if they provided the same information as a formal plan.

We also instituted a forum for project control: the MLAS Configuration Control Board. Project leadership and all subteam leads were voting members on the board, which controlled everything from our flight test timeline, project risks, requirements, and design. We relied heavily on a tiger team approach for tackling integrated technical issues quickly, assigning an integration lead and having all pertinent subteams provide members. This approach allowed us to effectively address such issues as vehicle stability, assembly, and alignment. A “product needs” list helped us capture, track, and prioritize product deliverables, such as data, analyses, detailed designs, trades, or decisions.

Knowing that we were accepting risk because of our pace and concurrent design-and-build approach, we sought independent perspectives and reviews. We included our Safety and Mission Assurance team members as integral members of the Systems Engineering and Integration team, keeping them involved in all decisions and actions. We also tailored the standard milestone reviews to conduct three Independent Technical Reviews, inviting the same reviewers each time.

To reward and encourage engineering innovation, a can-do attitude, and a commitment to the safety and success of the project, our project manager instituted the Max Engineering Excellence Award. These awards have served to publicly recognize the best of our team.

On July 8, 2009, the MLAS team was rewarded with a fully successful flight demonstration test, including sixteen pyrotechnic events and nine parachute deployments. It will take several months for all the data to be reviewed and analyzed, then a final report and briefing will be shared with the Orion project and Constellation program. To see the results of long hours and hard work was tremendously gratifying for the entire team. We hope this successful flight test will serve as a model for future alternative, risk-reduction efforts at NASA.

Robert Seamans, NASA’s deputy administrator in the Apollo years, said, “You cannot have good technical people on standby doing nothing and suddenly put them on the job when you have a problem. You have to have competent people doing exciting work that is not central to the program so they can be thrown in to fix the problem even if it takes six months.” Developing MLAS as an alternate design to the launch abort tower system currently used not only allowed NESC to help gather technical information, but also provided valuable hands-on training for a team of engineers and analysts.

Omar Torres, another resident engineer at Langley, said, “Working with NESC has exposed me to the difficulties and glories of developing an intricate system such as the MLAS capsule. Taking part in the discussions of design and troubleshooting where subsystems of different engineering disciplines come together has been one of the most instructive and engaging developments of my career. Participating in the MLAS resident engineering program and working with the remarkable team of engineers in the project will always be one of my most significant experiences.”

Dawn Schaible is the manager of the Systems Engineering Office for the NASA Engineering and Safety Center (NESC). She was also the MLAS systems engineer and integration lead. Prior to joining the NESC, she worked at the Kennedy Space Center, serving in various systems engineering, integration, and ground processing roles for the Space Shuttle and International Space Station programs.