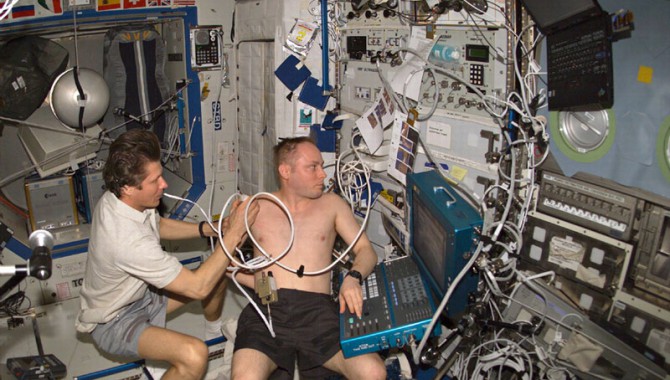 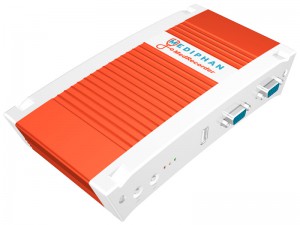 In spring 2008, Dr. Scott Dulchavsky diagnosed high-altitude pulmonary edema in a climber more than 20,000 feet up the slope of Mount Everest. Dr. Dulchavsky made the diagnosis from his office in Detroit, half a world away. The story behind this long-distance medical achievement begins with a seemingly unrelated fact: There is no X-ray machine on the International Space Station (ISS).

On the ISS, diagnosing an injury or other medical issue can be problematic; bulky medical-imaging devices like X-ray, CAT, or MRI machines are too large and heavy for costly transportation into space. And while crew medical officers receive some diagnostic training, the nearest doctors and fully equipped hospitals are 250 miles away on Earth. Future astronauts on long-term moon or Mars expeditions will face even greater challenges.

The ISS does have an ultrasound machine—at 168 pounds, much smaller than its imaging-technology counterparts—installed as part of the Human Research Facility for experiments on the effects of microgravity on human health. During medical use, the ultrasound machine’s hand-held transducer emits high-frequency sound waves that partially reflect at points of differing density, such as between soft tissue and bone. The machine’s computer translates the echoes into a two- or three-dimensional video representation. On Earth, ultrasound is commonly used for imaging fetus development, abdominal conditions like gallstones, and blood flow in patients with arterial disease. Unconventional applications, like diagnosing broken bones or collapsed lungs, were not explored given the ready availability of X-ray and MRI machines in hospitals and the high density differences of bone and air, which completely reflect the ultrasound waves and prevent clear images of deeper tissue.

That changed in 2000, when NASA approached Dr. Dulchavsky, chair of the Department of Surgery at Henry Ford Hospital in Detroit, to make ultrasound a more versatile diagnostic technique and to adapt it for remote use on the ISS. Dr. Dulchavsky tested new ultrasound applications and found that, in many cases, such as with collapsed lungs, the technique worked better than X-ray imaging. He became lead investigator for the Advanced Diagnostic Ultrasound in Microgravity (ADUM) experiment, a collaborative effort between Johnson Space Center, Henry Ford Hospital, and Wyle Laboratories Inc. in Houston. 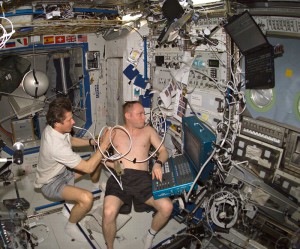 Aided by Onboard Proficiency Enhancer (OPE) software, cue cards, and direct communication with doctors on Earth, ISS crewmembers with only minimal ultrasound training (about three hours as opposed to about five hundred hours for a professional) used nontraditional ultrasound techniques pioneered by Dr. Dulchavsky’s team for capturing images of a wide range of body parts. These novel ultrasound techniques can evaluate infections in the teeth or sinus cavities or judge the effects of spaceflight on the central nervous system by measuring changes in the diameter of the eye’s optic nerve sheath as a gauge of pressure around the brain. Experts on the ground received diagnostic-quality images from the ISS through a satellite downlink, demonstrating the effectiveness of ultrasound as a multipurpose, remote-diagnostic tool in space.

In keeping with NASA’s mandate to translate space technologies into applications for terrestrial use, Henry Ford Hospital doctors and Wyle engineers worked to find ways to overcome a major obstacle to bringing the ADUM-developed remote-ultrasound procedures down to Earth: There were no cost-effective, technologically viable methods for sending ultrasound scans over long distances without a loss of image quality. “We have a great satellite hookup and a big telemedical network at NASA, but we don’t have these for common terrestrial use,” said Dr. Dulchavsky.

To overcome this problem, they collaborated with Epiphan Systems Inc., a computer-imaging industry leader headquartered in Canada with offices in Springfield, New Jersey. The cooperation resulted in the formation of Mediphan, a remote-medical diagnostics technology company. Mediphan drew on NASA expertise to adapt Epiphan’s video-streaming innovations into a practical solution and has developed and commercialized two tools for terrestrial telemedical use.

DistanceDoc, an external video-frame grabber, makes use of Epiphan’s video graphics array (VGA) capture technology to take diagnostic-quality and Digital Imaging and Communications in Medicine (DICOM) standard stills or video from the ultrasound monitor (or any other medical device with a video display, such as an electrocardiogram or ventilator). It then allows the ultrasound operator to transmit the images securely over the Internet in real time and at near-original resolution. The second tool, MedRecorder, is a similar device that captures diagnostic-quality and DICOM imaging, then stores and archives it for later reference, like an external hard drive. 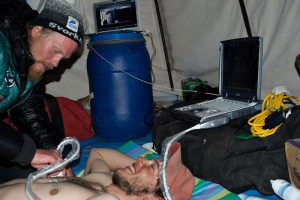 This climber was diagnosed with high-altitude pulmonary edema while more than 20,000 feet up the slope of Mount Everest—miles from professional medical personnel.
Photos courtesy NASA Spinoff

Each device plugs into the VGA port of any standard ultrasound machine and then connects to a computer by a universal serial bus, or USB, 2.0. A non-physician can, with minimal technical know-how, install Mediphan’s technology and use it to send medical imaging for consultation with experts. Coupled with the highly portable General Electric LOGIQ laptop ultrasound machine and the NASA-developed OPE instructional software now modified for broader use, even the medically inexperienced can consult with distant doctors to diagnose medical issues when and where they occur.

The applications of remote-ultrasound diagnostic capabilities are widespread and increasing. The major professional sports teams in Detroit are all using the ultrasound procedure, OPE software, and Mediphan devices for immediate locker-room diagnoses of injuries that happen during practice and games. Olympians at the 2006 Winter Olympic Games in Torino, Italy, benefited from the telemedical procedure, as did athletes at last year’s Summer Olympic Games in Beijing, China. Currently, the procedure is used for day-to-day oversight of Olympians in training facilities across the United States. It also allows trainers to establish baseline evaluations of athletes’ body structures, making for easier recognition of damage due to injury. More than 345 musculoskeletal ultrasound examinations have been performed on Olympians and professional athletes so far, a number of these with remote guidance.

The technology is also helping improve education, allowing a medical student on duty to share diagnostic information with an attending doctor elsewhere. The MedRecorder offers medical students the ability to archive personal portfolios documenting proficiency in diagnostic techniques and provides an affordable way to store and maintain records.

Meanwhile, the United Nations Millennium Project, which has among its goals improved maternal care in underserved areas, plans to use the telemedical procedure in developing countries. Dr. Dulchavsky and NASA engineers are currently working to create a highly versatile, environmentally robust device that could serve as a kind of information node connecting patients in remote areas to distant experts via Mediphan technology. Then, Dr. Dulchavsky said, “we could utilize the techniques and technologies that we developed for use on the ISS to diagnose a wide variety of medical issues, such as traumatic injury, problematic pregnancies, and certain infectious diseases.”

Last year, working at a distance with a NASA team in the Mars-like environment of Devon Island in northern Canada, Dr. Dulchavsky performed the first-ever remote guidance of a simulated appendectomy. One day, the same technique may be used to do the real thing in a village in Madagascar, on the slope of Everest, or on Mars itself.

This article was originally published in NASA’s Spinoff 2009.

Bo Schwerin is an award-winning author and works at the NASA Center for Aerospace Information as a senior science writer for NASA’s annual Spinoff publication.

Bo Schwerin is an award-winning writer and editor-in-chief of NASA’s annual Spinoff publication, which features the year’s best examples of NASA technology transfer and innovative partnerships benefiting life on Earth.